Western nations need to build closer partnerships with the private sector to sharpen NATO and the European Union responses to hybrid security threats, participants at a unique day-long exercise concluded.

“Hybrid warfare is now real warfare,” Jamie Shea, Senior Fellow at Friends of Europe and former deputy assistant general at NATO. “This is an opportunity for the private sector and government to solve the problems.”

The event drew over three dozen senior officials and security experts from NATO, European institutions, national authorities and private companies to examine how they can build society-wide resilience to hybrid challenges.

Participants underscored the need to build trust that creates a ‘co-working’ space for private and public players to ensure seamless cooperation in the event of a crisis.

“Partnership with the private sector, has to be more than just cooperation,” said a lawmaker from one NATO ally.

“It should be about formulating policy together, not just cooperating when you have a problem,” they added, pointing out that the private sector is often the target of hybrid attacks as well as a solution provider.

The exercise was based on responses to a fictional scenarios that included the high-jacking of a ship loaded with liquified natural gas which terrorists threaten to explode in a crowded port city; cyber-attacks that shut down banking services in a European Union country ahead of sensitive elections; and the mysterious severing of undersea cables linking the country to the rest of the EU.

Among the ideas, participants emphasised the need for better intelligence sharing to ensure relevant policymakers are fully informed of hybrid risks; the importance of greater international cooperation between law enforcement and civil protection services to match that among the military; for pro-active media strategies to keep citizens informed and counter fake news during a crisis; and outreach to all sectors of society to counter hostile efforts to undermine faith in democratic institutions.

“If we adopt resilience it will serve us for all sorts of scenarios, so it’s a win-win situation,” Shea concluded. 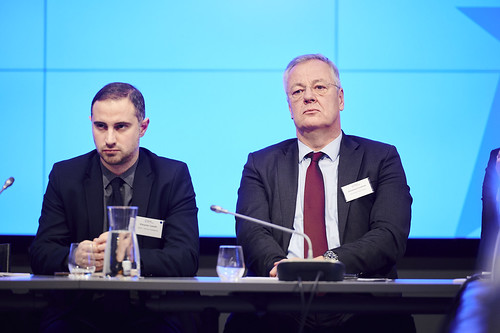 Friends of Europe‘s new flagship project ‘Hybrid Warfare Readiness’ is a group simulation tabletop exercise involving international actors from both the private and public sectors. The exercise is aimed at strengthening public-private sector cooperation in hybrid crises. Participants will have to deliberate on how to proceed when faced with a series of hostile hybrid campaigns directed against large portions of Europe’s economy and security. The tabletop exercise will bring together some 30 senior decision-makers including representatives from the EU, national governments, the private sector, and NATO.

The purpose of this exercise is to explore how governments, institutions and the private sector work together during a hybrid threat crisis. Friends of Europe will summarise the key takeaways of the exercise and produce recommendations to improve cooperation among the key actors affected by a hybrid crisis.

The exercise will be held behind closed doors and is by invitation only. The outcomes and key recommendations will be widely distributed.

Former minister of foreign affairs, former minister of defence, First Vice-Chair of the Standing Committee on Energy and the Environment for the National Parliament of the Kingdom of Norway

Member of the House of Lords, Chair of the National Preparedness Commissio, former Chairof the Metropolitan Police Authority, and former Reviewer of London’s terrorist preparedness

Chairman of UniportBilbao and Co-founder and CEO of Sparber Group

Director for External Relations at the European Commission Secretariat General

Senior Fellow for Peace, Security and Defence at Friends of Europe, Lecturer for Institute for Security Governance (ISG) in Monterey, California, and Advisor for Governance and Resilience at Extended Reality Safety Initiative (XRSI), San Francisco

Senior Expert on Cyber Security at the e-Governance Academy Foundation

Adviser at the European Commission Directorate General for Communication

Political Advisor at the US Mission to NATO