No time to waste transforming Europe’s agri-food sector
If the world can achieve food sustainability, despite climate change and rising food demand, it can achieve sustainability everywhere. This ray of hope emerged during the ‘Future of Food’ conference in Brussels on 20 November 2019, jointly organised by Friends of Europe and EIT Food. Stakeholders from across the food value chain – from farm to fork – engaged in lively debate with scientists and policymakers on ways to sustainably transform this pressurised sector.

“Food is wrapped up with our well-being and emotions, as well as every aspect of our society and physical world,” noted the moderator Dharmendra Kanani, Director of Insights at Friends of Europe. He urged this conference to come up with policy ideas and recommendations on food system reforms for the new EU mandate.

Hunger remains a key problem worldwide, even though crop yields have increased with intensive farming. Millions go hungry in the South, while twice as many (two billion) are either obese or overweight, mainly in the North.

European consumers increasingly want healthy, nutritious and affordable food. Farmers struggle to match their rising demands, and to make a living while meeting environmental rules. To compound problems, the land needed to produce so much of our food is also under increasing pressure from human activities and global warming. “Agriculture, alongside deforestation and peatland damage, accounts for a fifth of greenhouse gas emissions,” warned Koko Warner, from the UN Climate Secretariat and co-author of the IPCC’s new ‘Climate Change and Land’ report.

Sustainability is the only solution
To feed millions more and to feed everyone better, the agri-food sector must fully commit to sustainability. This could result in just 3.5% of the world’s population going hungry by 2050. “A sustainable scenario means achieving more by producing less,” noted Marco V. Sanchez, from the UN’s Food and Agriculture Organization. We will also need smarter and more intensive farming, new technologies, reduced livestock emissions, and diets mainly based on plants.

Other participants also argued for systemic and transformative change in agri-food. “Time is running out, with 9 billion to feed by mid-century and climate change threatening chaos for our planet and food system, so we must decarbonise six times faster than planned,” said John Bell, Healthy Planet Director at the European Commission Directorate-General for Research and Innovation. Hence the importance of the new European Green Deal, designed to make the continent climate-neutral by 2050 and to transform Europe in the process. Andy Zynga, CEO of EIT Food, said the European Green Deal is a great opportunity for the EU to transition to a more sustainable food system, leveraging all tools at our disposal, including the upcoming Horizon Europe R&I programme.

According to John Bell, the Green Deal will frame the pathways, transitions and means to achieve sustainability – with food at the centre of public policy. “This sustainability drive is the EU’s 5th great mission,” he added. The EU will introduce a just transition fund to help poorer Europeans to cope with the associated costs.

Behaviour change will be essential for this EU transition. Everyone in the food value chain must sign up to it, starting with food producers. Luisa Crisigiovanni of Altroconsumo, an Italian consumer body, said consumers should be convinced that sustainable food’s benefits outweigh the costs: “Europeans must feel part of the food chain. Let’s increase their trust in food’s origin and quality, and reduce food waste.”

“We have a food crisis, but this conference has set Europe on a transformative journey to sustainability,” concluded the moderator, after several workshops and brainstorming sessions. 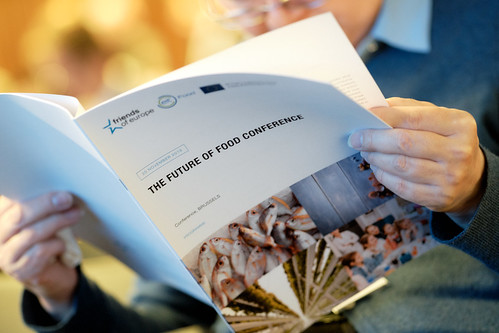