A conversation with Margrethe Vestager on Shaping Europe's digital future

“How has your week been?” A seemingly simple question, but not in these days and particularly not for European Commission Executive Vice-President Margrethe Vestager. In our virtual ‘In Conversation With’ event on 27 March, Vestager outlined the Commission’s response to the current COVID-19 health crisis. The recently implemented Temporary Framework for state aid allows for common practices across Europe and prevents a fragmented response by the Member States. The Commission also actively works against ‘virus profiteering’ through small cartels as well as big tech companies. With regard to the use of data to tackle this health emergency, the Commissioner recalled the commitment to use “data for good” while adhering to strict standards that stay true to the privacy commitments of Europe’s General Data Protection Regulation.

The College of Commissioners is working hard on reversing the implementation of disruptive barriers to the Single Market through the introduction of green lines at border crossings, the establishment of European-wide public procurements for medical supplies and the close cooperation with the private sector.  Any short-term emergency responses need to be able to outlive the crisis as “we need to preserve the Single Market and make sure that it will be ready for a green and digital future in a post-COVID-19 reality.” Vestager made clear that the European Commission is “part of our democracy and not above it” and is therefore committed to ensuring that no policy that aims to tackle the current health emergency violates the essential building blocks of our societies – namely trust, transparency and accountability. 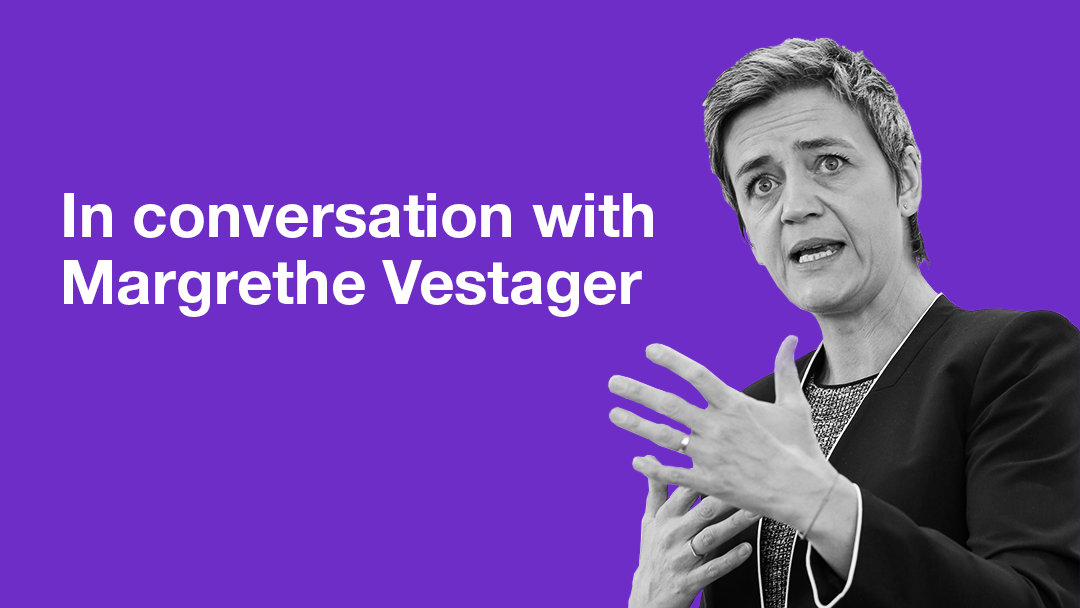 With the EU mandate in place, the ‘Conversation With’ series provides an opportunity to engage with the new college of commissioners. It will feature interactive interview style discussions with our multi-stakeholder audience and our ecosystem of diverse members from the private, public and civil society sectors and also engage with Ursula von der Leyen’s priority to be closer to citizens.

We will also harvest questions, concerns and ideas from citizens across Europe from our 5 million user, online platform – Debating Europe, and put these to the commissioners. We will conduct video interviews to be shared on Debating Europe as part of a follow up debate, allowing citizens to react.

Margrethe Vestager is a Danish social liberal politician with a long and distinguished career on both the European and national level. In her current portfolio as Executive Vice-President, she is responsible for steering Europe through the digital revolution. She previously made a name for herself as the much-praised Commissioner for Competition (2014-19). She was also Denmark’s Minister for Economic Affairs and the Interior (2011-14) and for Education (1998-2001). In the former role, she served as President of the ECOFIN Council during the Danish EU Presidency (2012). Alongside her ministerial roles, she led the Danish Social Liberal Party (2007-14). Prior to this, she worked for the Danish Ministry of Finance (1993-95).

Read more about "Towards Agenda 2030 in the Euro-Mediterranean: mitigating the impact of Covid-19"

Read more about "Myanmar’s coup, the Rohingya and the EU"