Transatlantic defence: are we watching the same movie?
An element of strategic divergence means the US and Europe are currently “not quite watching the same movie on the two sides of the Atlantic”, but there is hope that transatlantic defence industrial cooperation can function better if trade-offs are accepted and we have a shared view of the value of working together as allies, says the author of Friends of Europe’s latest report on peace, security and defence.

A minefield of opportunity: transatlantic defence in the Trump era, written by Politico journalist and Friends of Europe Senior Fellow Paul Taylor, was launched in Brussels on 28 January.

The report examines the political and strategic context – both historical and current – that helps shape the relationship between NATO allies in Europe and North America. It takes a detailed look at the American and European defence sector markets, the challenges and obstacles that remain within their structures and regulations, and how more efficient and open defence industrial cooperation could effectively plug NATO-identified capability gaps, strengthen joint efforts to tackle the changing nature of security threats, improve interoperability and give the taxpayer better value for money.

Taylor’s conclusions, discussed by a panel of experts at the launch, offer a ‘to do’ list on how to optimise cooperation to strengthen NATO while making the most of Europeans’ increased willingness to invest in their own defence. Among the recommendations is the establishment of a US-EU challenge fund for companies to collaborate on defence-related technologies in areas such as artificial intelligence and cyber security.

Ben Hodges, former commander of US army forces in Europe and currently Pershing Chair in Strategic Studies at the Center for European Policy Analysis (CEPA) in Washington DC, agreed with the report’s suggestion to have the US encourage more European defence investment and development.

“At the same time the US of course wants to compete in Europe in the defence industry. They don’t have to be exclusive of each other – we should compete and provide the best possible product. As a former soldier, what I care about the most is that our men and women have the best possible equipment and capabilities to be effective,” he said.

Managing Director for the Americas at the European External Action Service (EEAS), Edita Hrdá, said the new European Commission was putting a high priority on transatlantic relations and security and defence. This is keeping in line with its aim of becoming a ‘true geopolitical actor’.

“What we are choosing is multilateralism, a more geopolitical Commission, and we clearly say that NATO will be the cornerstone of EU defence policy. This is clear and we need to repeat it in the moments when someone has doubts,” she said.

Echoing his US colleagues on the panel, Jim Townsend, Adjunct Senior Fellow at the Center for a New American Security (CNAS) Transatlantic Security Program, said it was important that the report had set out the historical context to the EU-US relationship, so people understand that “we’re not dealing with something that’s a Trump thing”.

“These issues with transatlantic defence trade have been around for decades. You can’t understand where we are today, and the advances we have made, unless you understand the context,” he said.

Moderator and Friends of Europe Senior Fellow Jamie Shea said it was clear from the debate that despite recent disquiet, goodwill and intent to improve cooperation remained between the transatlantic partners. “There is a real sense that our destiny is still with each other. We don’t hear that as often as we need to,” he said.

Defence is still seen as an issue of national sovereignty, he added: “But in the 21st century we need to learn to trust each other, to work with each other, and to pool that sovereignty – on both sides of the Atlantic, and not just within Europe – if we are really going to stay ahead of the game.” 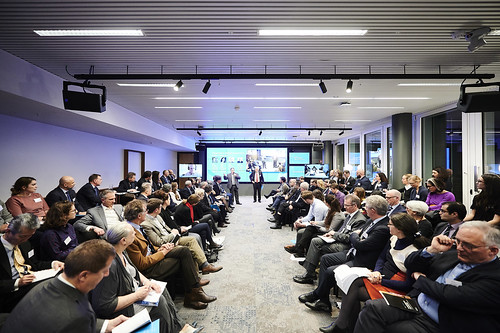