Here’s a quick recap of the second day of State of Europe – the festival of politics and ideas to transform Europe.

The Bio Revolution/Reshaping the EU’s industrial strategy, from competition to trade policy

The Bio Revolution / Reshaping the EU’s industrial strategy, from competition to trade policy

The global reach of COVID-19 has underscored the need for international cooperation, said speakers on day 2 of State of Europe 2020. As the world starts to recover, Europe should push for a level playing field in international trade. That means forging an industrial strategy that boosts competitiveness and safeguards supply, without a lurch to protectionism. “Europe cannot turn into protectionism, it would be a huge mistake because nobody has achieved more from open trade in the past decades than the European Union,” (30:53) said Cecilia Malmström, Former Commissioner for Trade and Trustee of Friends of Europe. The session opened with a presentation on the transformational opportunities, and potential risks, of the ongoing revolution in biotech.

5:09 – the world is at a “special moment” as revolutionary advances in biology converge with progress in computing automation and Artificial Intelligence (Matthias Evers, Senior Partner at McKinsey & Company)

48:16 – business likes the European green deal and welcomes that “industrial policy is becoming an important part of Europe’s way of acting” (Jean-Pierre Clamadieu, Chairman of the Board of Directors of ENGIE)

1:28:21 – the digital deal needs as much ambition and political will as the green deal because Europe is currently “horribly behind” its global tech competitors (Frank Heemskerk, Secretary-General at the European Round Table for Industry (ERT) and former Dutch minister for foreign trade) 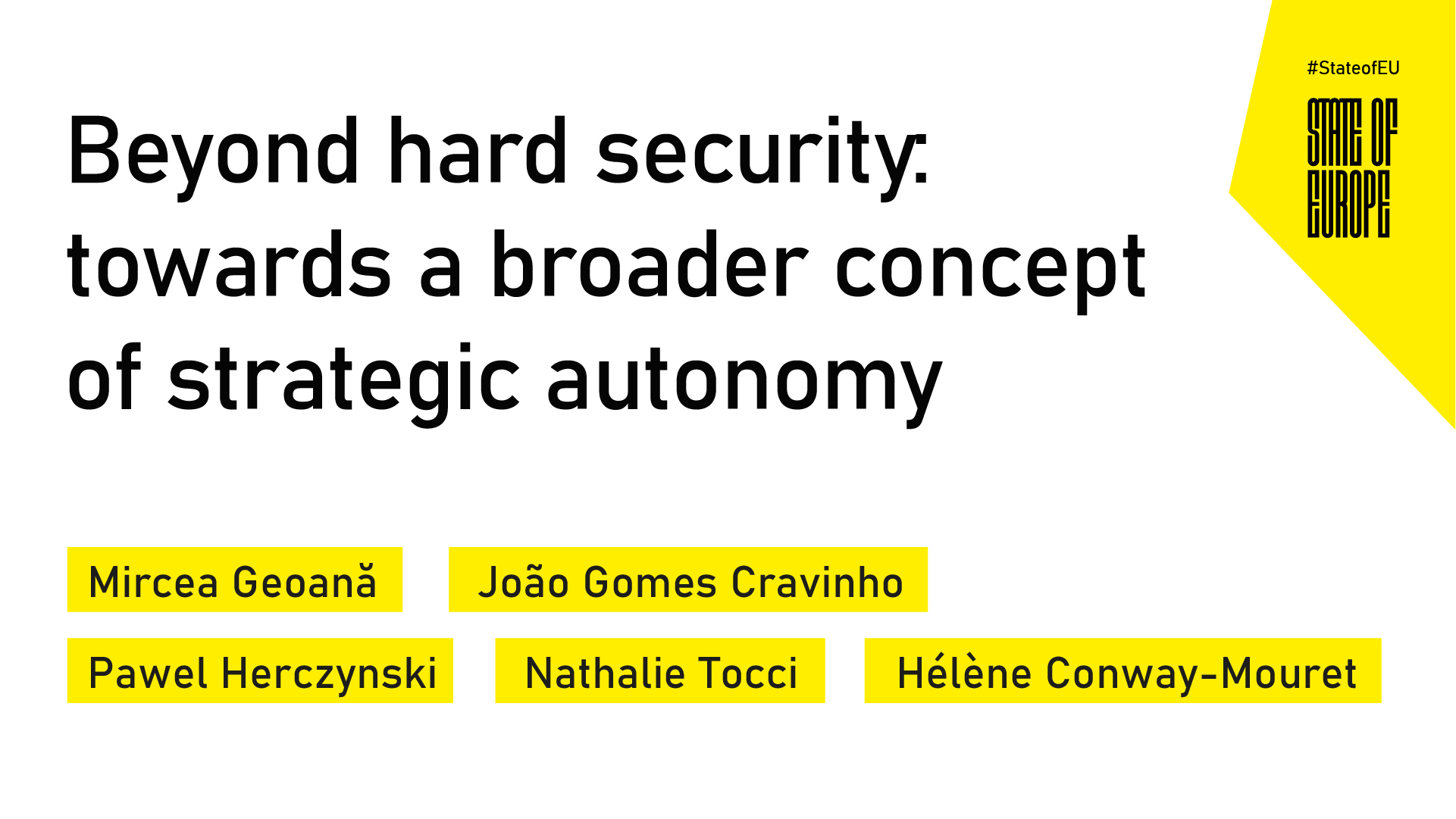 Beyond hard security: towards a broader concept of strategic autonomy

Beyond hard security: towards a broader concept of strategic autonomy

“Strategic autonomy” has become a new Brussels buzz-phrase as Europe faces pressure from authoritarian powers, instability in its neighbourhood and strained relations with the United States. The new concept, however, cannot challenge NATO or the transatlantic alliance, speakers insisted. Instead, Western allies should renew and strengthen their ties. “Like an old marriage … we have to renew our vows,” said Mircea Geoană, NATO Deputy Secretary-General. “I strongly believe that the European Union needs a stronger place in the world … but we have to do it in a way to not weaken the political West, not to weaken the transatlantic bond.”

16:54 – defence priorities for Portugal’s upcoming EU presidency include developing a maritime dimension to the European defence identity, the civil-military dimension, cooperation in Africa and the Mediterranean (João Cravinho Gomes, Portuguese Minister of Defence)

30:39 –EU authorities have no choice but to be geopolitical given the external challenges Europe faces (Pawel Herczynski, Managing Director of the Common Security and Defence Policy and Crisis Response at the European External Action Service)

40:51 – Europe needs to reverse cuts in defence spending to move beyond words and plans and into action (Nathalie Tocci, Director at the International Affairs Institute) 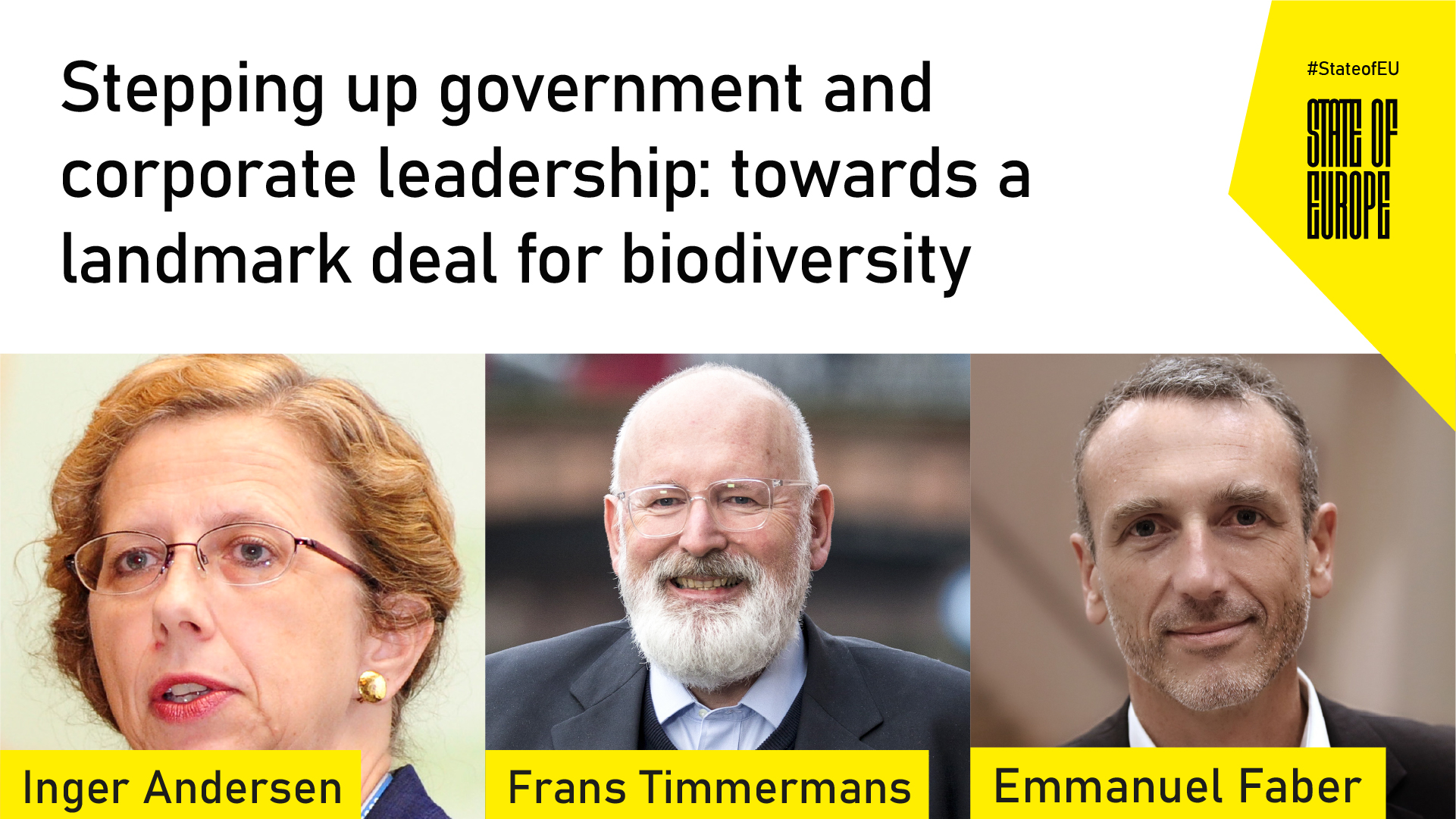 Stepping up government and corporate leadership: towards a landmark deal for biodiversity

Stepping up government and corporate leadership: towards a landmark deal for biodiversity

To meet the challenge of biodiversity loss and climate change, the world needs a whole-of-society response, and it needs it fast. “You need a sense of urgency. If we are brutally honest, we have to admit that in the general public, the biodiversity crisis does not have the same sense of urgency as the climate crisis or the COVID crisis,” (15:55) cautioned Frans Timmermans, European Commission Executive Vice-President for the Green Deal. “We need to use all our efforts to increase the sense of urgency.” Ideas generated in the debate included: overhauling farm and trade policy to promote biodiversity; labelling rules that allow consumers to choose biodiversity-friendly products; expanding the range of plant and animal varieties used in agriculture.

8:44 – Climate-smart and biodiversity-smart policies also have to drive jobs and growth; the fiscal debt we’re leaving for the future cannot be accompanied by an environmental debt (Inger Andersen, Executive Director of the United Nations Environment Programme)

13:59 – Friends of Europe’s #EuropeMatters citizens’ poll shows 49% of Europeans want the EU to prioritise the environment and a sustainable future. (Dharmendra Kanani, Director of Insights at Friends of Europe)

25:59 – business leaders understand the threats from biodiversity loss, especially in agriculture, and are working to address issues such as soil fertility, product diversity (Emmanuel Faber, Chairman of the Board and Chief Executive Officer of Danone)

NEW POLL: 49% want the EU to prioritise the environment and a sustainable future

Yesterday, we released our 2020 #EuropeMatters Citizens’ Poll, learn what we discovered here

To our registered discussants, don’t forget to login to the dedicated website tomorrow morning to take your place in the discussions.

To those of you following the livestream of State of Europe from our website, please don’t hesitate to post your questions on Twitter using the #StateofEU hashtag, and we’ll get it into the discussion.

See you all tomorrow for day two of the festival of politics and ideas!