Here’s a quick recap of the final day of State of Europe – the festival of politics and ideas to transform Europe. 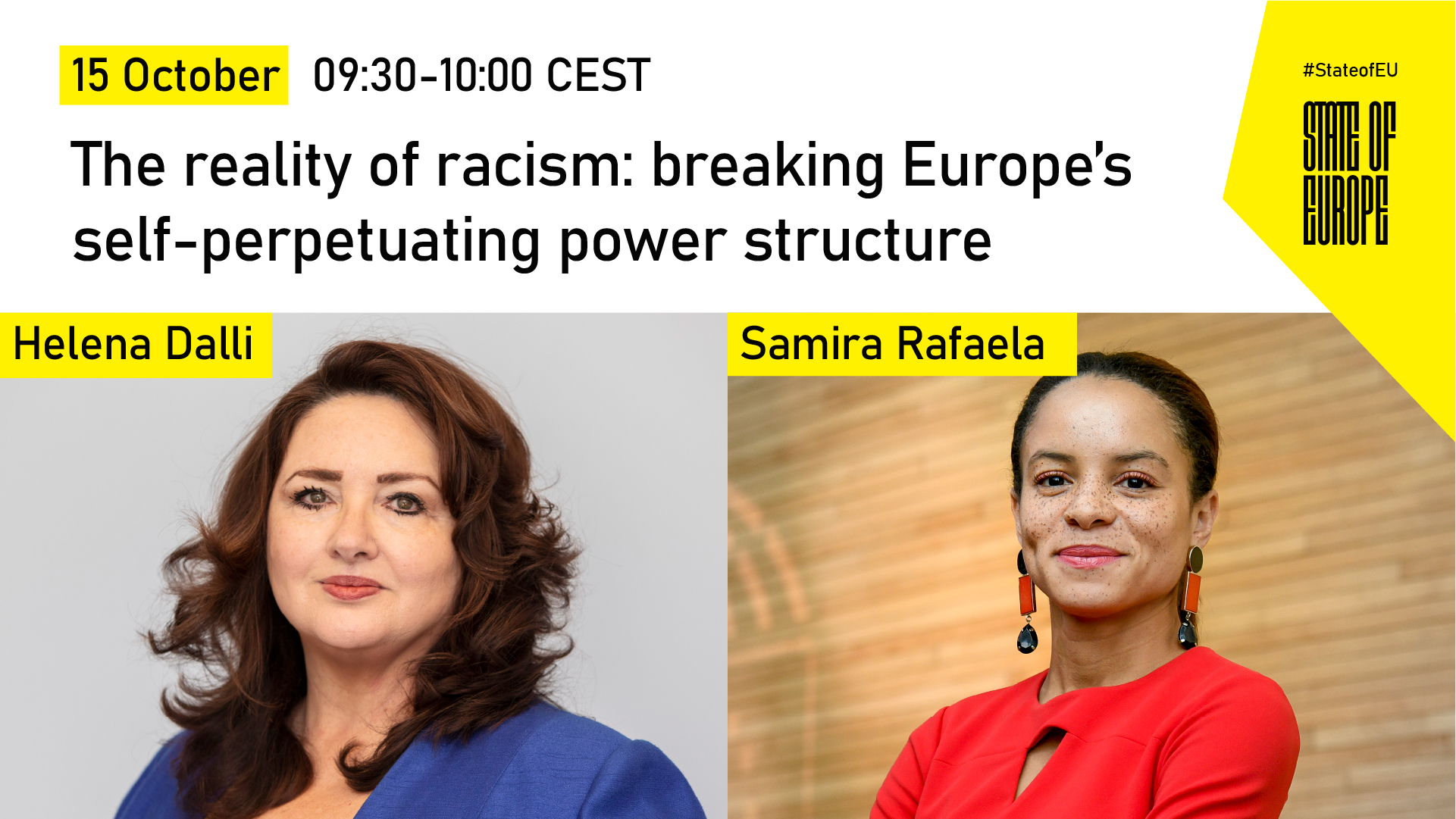 European Commission President Ursula von der Leyen pledged in September to forge “a truly anti-racist Union – that goes from condemnation to action”. What steps are needed to put that pledge into practice? Can Europe match its anti-racist laws with action to tackle insidious structural racism that leaves minorities facing discrimination? “We may have the best legislation in the world, but what we have to change are attitudes and prejudices,” (2:23) said Helena Dalli, European Commissioner for Equality. “What we have to work on, to be effective, are policy responses that address racism in all its different forms.”

Highlights from the session include:

2:50 – overt racism is “only the tip of the iceberg” action needs to be taken against unconscious bias and structural racism embedded in social, financial and political institutions (Dalli)

5:25 – it’s important to invest in education from an early age on shared history and different cultures (Samira Rafaela, Co-chair of the European Parliament Anti-Racism and Diversity)

22:29 – there’s a need to have people from different backgrounds in key management positions to counter the lack of diversity in EU institutions (Rafaela)

Building the resilience of the EU’s healthcare systems
COVID-19 has revealed with brutal clarity the fragilities in healthcare systems around the world. This session – held under Chatham House rules – explored what needs to be done to build greater resilience into our systems.

The pandemic, it was said, has highlighted the need for coordinated global preparation for, and response to, health emergencies. Participants also discussed how by rationalising and modernising healthcare, we can save 11 million lives by 2040 without major additional expense.

It was made clear that digital should be the default for primary medical consultations and that Europe needs a much greater investment in digital healthcare, including through greater data use and AI.

Another issue raised was that a rethink is required on how we measure the affordability of healthcare. Furthermore, disinvestment is difficult and “not sexy” but has to be done to cut obsolete waste from healthcare systems. 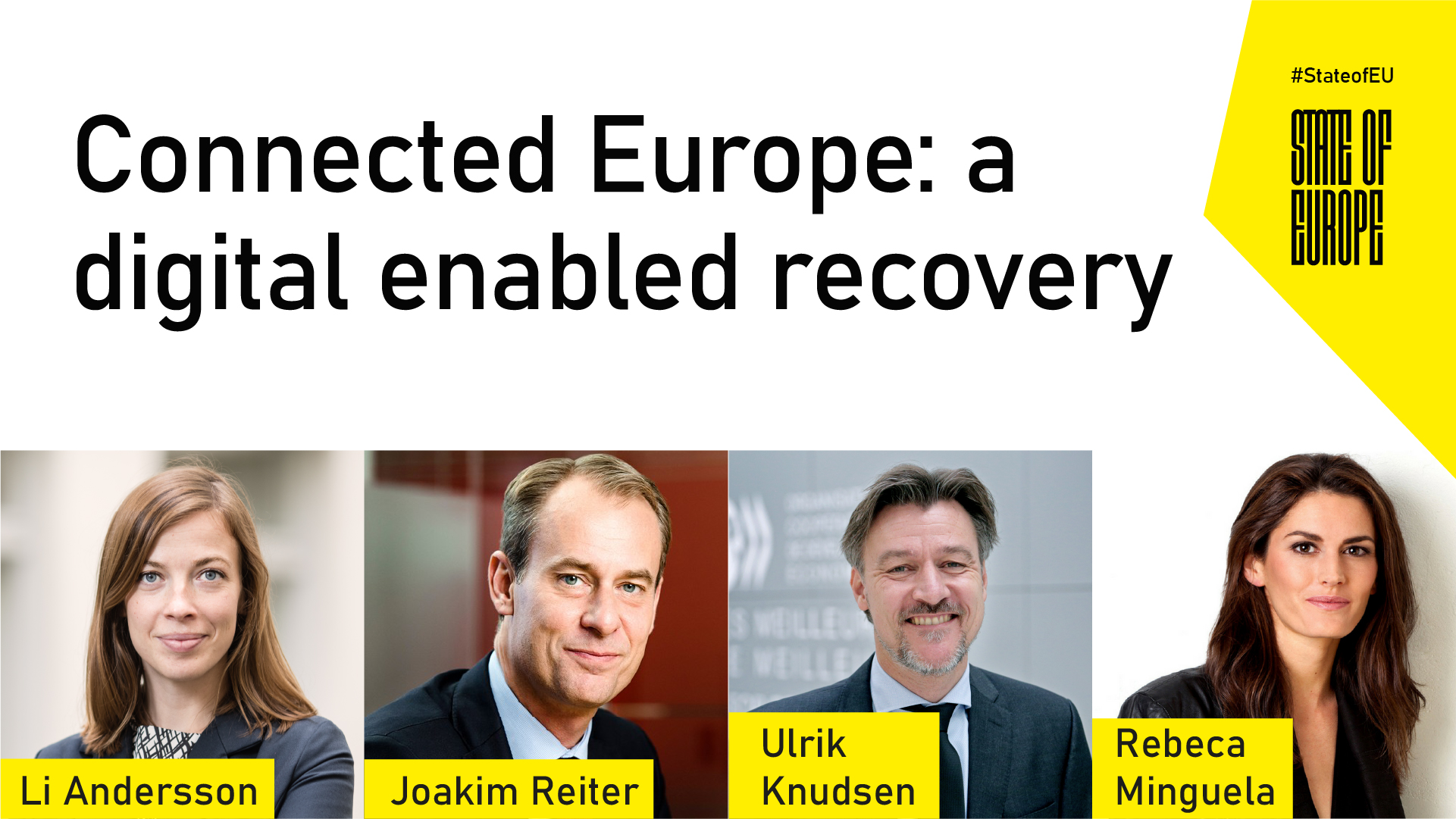 Europe lags behind the United States and China in the digital race. It needs to act fast at a time when connectivity is key for post-COVID-19 recovery. Investment in technology and skills is essential to drive forward inclusive progress that can make Europe more competitive while overcoming society’s growing digital divide. “Whether you look at this from a geopolitical viewpoint or an economic viewpoint, or even just a viewpoint of inclusiveness, getting everyone on board this digital transformation, connectivity is tremendously important,” (5:55) said Ulrik Vestergaard Knudsen, Deputy Secretary-General of the Organisation for Economic Co-operation and Development (OECD).

Highlights from the session include:

12:21 – ecological restructuring and digitalisation must be at the core of Europe’s recovery (Minna Kelhä, State Secretary for Education, Finland)

24:47 – companies and markets are changing to focus more on values, the environment; consumers are driving that by making values-based choices (Joakim Reiter, Vodafone’s Group External Affairs Director and member of the Group’s Executive Committee)

40:36 – investment in technology has to be matched by investment in skills, science and R&D (Rebeca Minguela, Founder and CEO of Clarity AI and 2018 European Young
Leader)

'Going it alone’ does not work

High-level session – Going it alone does not work

The multilateral rules-based order has been battered by the rise of nationalist populism around the world, yet COVID-19 has shown that international cooperation is needed more than ever. Can the multilateral approach, supported by liberal, democratic values, make a comeback? Or are me-first policies set to dominate, pushing us towards dangerous superpower rivalries and a failure to confront global challenges that no nation can tackle alone. “The Americans can’t do this acting alone and that’s more true than ever,” (13:21) said Joseph Nye, Professor of International Relations at Harvard University, political scientist, author and commentator. “If you are going to deal with these issues, the global transnational issues, you are going to have to do with others.”

21:10 – it’s very difficult for the UN to take a lead in the current geopolitical context, but a new multilateral leadership is emerging through civil society, citizens’ networks, academia, young people (Baroness Valerie Amos, Master of University College Oxford and Trustee of Friends of Europe)

37:09 – China has benefited from the global system and wants to uphold and support it Henry Huiyao Wang, President of the Centre for China & Globalization (CCG) 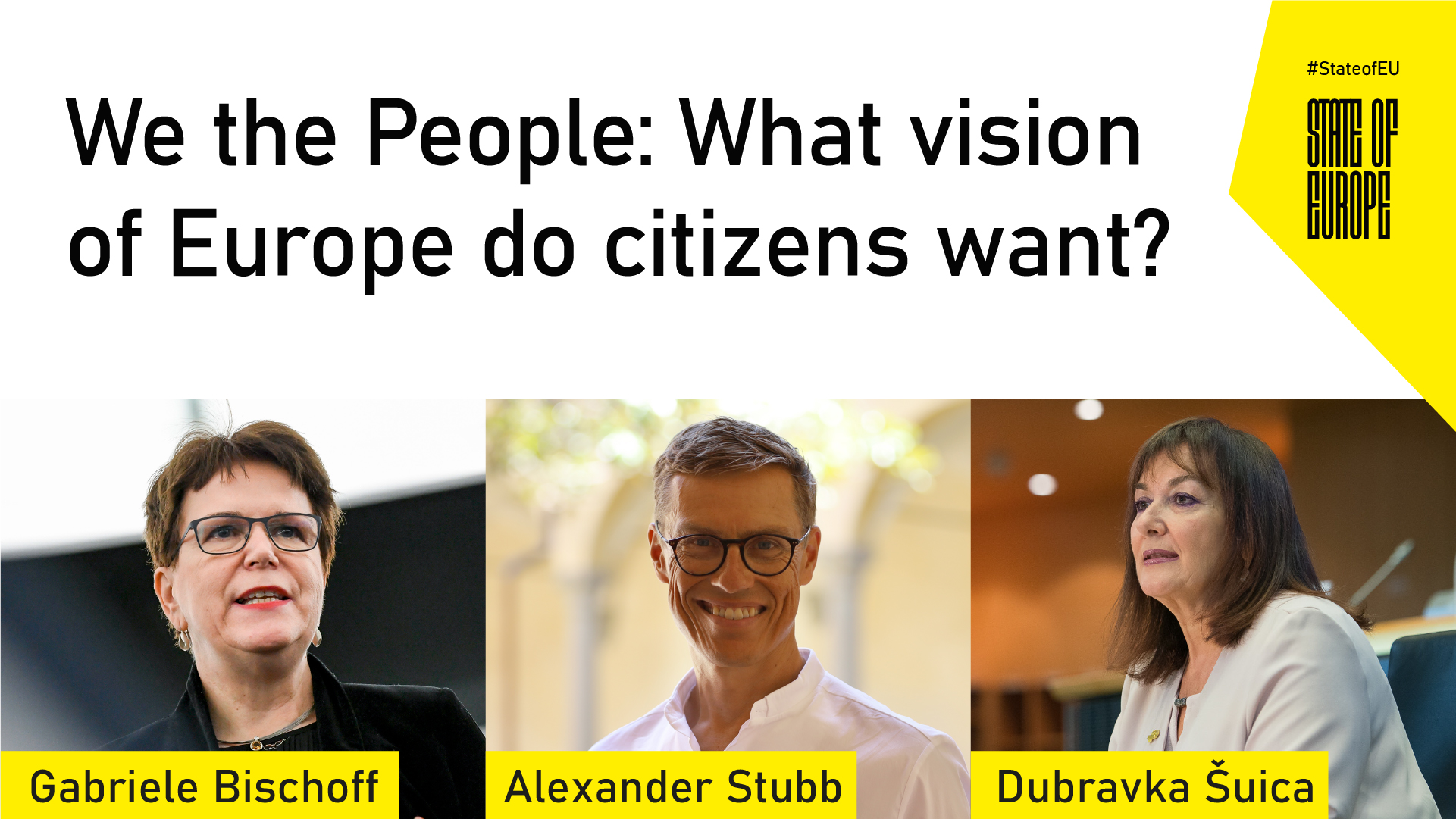 We the People: What vision of Europe do citizens want?

Festival closing – We the people: What vision of Europe do citizens want?

The final session of State of Europe 2020 paired three senior politicians with three youth activists for debate on what citizens, in particular young citizens, want from the EU as it prepares a Conference on the Future of Europe. “We think that citizens have to have a greater say,” (5:27) explained Dubravka Šuica, European Commission Vice-President for Democracy and Demography. “Nothing is off the table.”

8:25 – the conference should go “full Monty” in discussing change, but citizens should not underestimate the power of national governments to slam on the brakes (Alexander Stubb, Director of the School of Transnational Governance at the European Institute and former prime minister of Finland)

22:43 – youth involvement is key and young citizens should come together to put forward solutions and ideas that feed into the conference debate (Gabriele Bischoff, Vice-Chair of the European Parliament’s Committee on Constitutional Affairs) 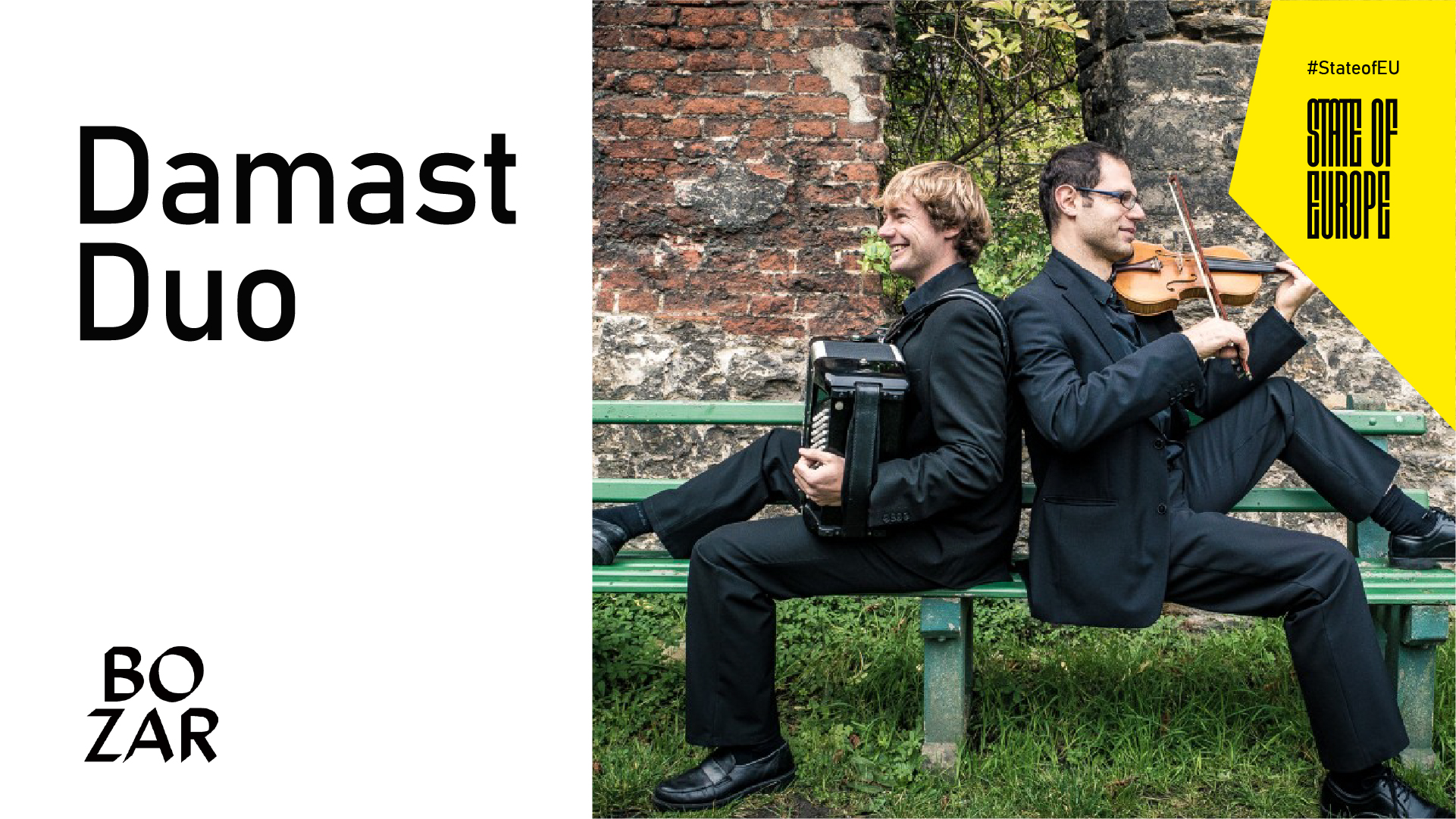 Thank you to all who joined State of Europe: The festival of politics and ideas.

For recaps from the previous days, please click on the links below:
Day 1 – On governance, leadership & social protection
Day 2 – On industrial strategy, strategic autonomy and a landmark deal for biodiversity
Day 3 – On tech for good, rethinking health systems and soaring musical journeys