Is the EU-Western Balkans ‘dance’ partnership still on?

Is the long-running ‘dance’ between the EU and the Western Balkans still gliding across the floor in harmony, or have the partners fallen dangerously out of sync?

That was the fundamental question put forward by moderator Shada Islam, Director of Europe and Geopolitics at Friends of Europe, to high-level panellists and guests at Friends of Europe’s latest debate on the region, held in Brussels on 3 December amid considerable anxiety over the Western Balkans’ immediate and long-term future.

Many at the annual policy summit event – this year entitled It Takes Two to Tango: the Western Balkans between hope and reality – gave candid accounts of their fears and frustrations following the EU’s recent surprise decision to delay accession talks with Albania and North Macedonia.

President of Kosovo*, Hashim Thaçi, said the region found itself at an “historical crossroads” and called the situation “dangerous”, with Western Balkans countries feeling discouraged by the EU’s position on the enlargement process. He cautioned that the resulting geopolitical vacuum threatens to be filled by other ideologies, with some countries already tumbling backwards into nationalism and populism.

Representing the EU’s newest member Croatia – which is preparing to assume the EU Council Presidency in 2020 – Marko Pavić, Minister of Regional Development and EU Funds for Croatia and 2019 European Young Leader, said the decision on North Macedonia and Albania was a “mistake” and pledged to act as an “honest broker” in urging the process forwards.

Offering reassurance, the European Commission Director-General for European Neighbourhood Policy and Enlargement, Christian Danielsson, said “the door for the Western Balkans is open. It is part of European history, it’s Europe.”

On regional cooperation, it was “high time” a bottom-up process gave more credence to the voices of citizens, said Secretary-General of the Regional Cooperation Council (RCC) Majlinda Bregu, but she said the region’s countries needed to have a merit-based and “credible process” for European integration ahead of them in order to be successful.

“They need to know what kind of accession process it’s going to be. Once you deliver, is the process going to give you the famous carrot?,” she added.

The policy summit gave space for discussions on myriad issues, including the need for: reforms to continue and not “backslide”; progress on the normalisation of Serbia–Kosovo* relations; more free movement opportunities, not least fulfilling promises on visa liberalisation for Kosovo*; more involvement from civil society and citizens, especially young people; more focus on corruption; and increased EU investment in the region.

Parallel sessions were also held to further discuss two specific themes. The first addressed the low representation of women and younger people in the region’s labour market, large-scale emigration, and the mismatch between the education system and the requirements of many employers. The second focused on the digital transformation and integration of the Western Balkans, including the physical infrastructure, building human skills, and tackling ‘brain drain’.

The event concluded with a session focusing on reconciliation in the region between cultures and ethnicities and whether non-political entities, including the arts, could play a bigger role where politics is failing, or is unwilling, to breakthrough.

Moderator Shada Islam asked whether a new narrative could see a different pose being struck by this time in 2020, adding: “Shall we get past this slow tango for next year and say we are going to rock and roll?” 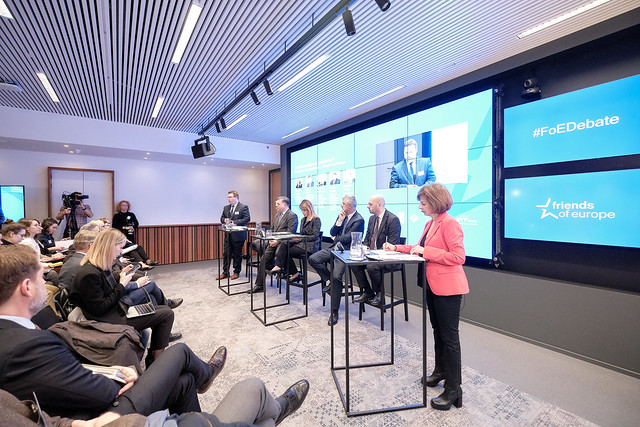 * For the United Nations Development Programme, references to Kosovo in this document accordingly shall be understood to be in the context of Security Council resolution 1244 (1999);
For the European Union, this designation used is without prejudice to positions on status, and is in line with UN Security Council resolution 1244/99 and the International Court of Justice Opinion on the Kosovo declaration of independence.

Read more about "European identity at home and abroad"

Read more about "Climate change: time for the military to step up?"

view all insights
Read more about "State of Europe 2020: the festival of politics and ideas to transform Europe"