Listen up policymakers: Africa is not coming to Europe

Why do people from Africa move and where do they go? The answers – which are as varied, complex and multi-layered as the continent itself – can seem ‘obvious’ to those who live the experience or work in the field. Yet the perception of migration from – and within – Africa remains stubbornly disconnected from reality.

What should be done to change this distorted, often toxic, narrative once and for all? How can policymakers ensure that Europe’s migration policies are based on facts, rather than false, politically-convenient assumptions? After taking a minute’s silence to honour the countless people who have lost their lives crossing the Mediterranean in recent years, participants at Friends of Europe’s 5 December Policy Insight ‘African perspectives: holding a mirror up to Europe’s migration policies’ grasped the challenge through an interactive discussion that also included live video links from across Europe.

“As a starting point we need to get away from this idea that Africa is coming to Europe,” said Heaven Crawley, Chair in International Migration at Coventry University, who carried out a major piece of research on the experiences of people crossing the Mediterranean to Europe in 2015.

“The vast majority of migration that happens in Africa stays within Africa,” she said.

The disconnect between political rhetoric and people’s real experiences is such that EU policies and the debate around them has “more to do with the symbolism of what migration represents” than the clear evidence before us, she said, adding: “Instead of evidence-based policymaking we now have policy-based evidence-making.”

“[Europe has] got it all wrong, this feeling that all Africa is coming to Europe,” said Issiaka Konaté, Director-General of Ivorians Abroad in Côte d’Ivoire’s Ministry of African Integration and Ivorians Abroad. “It’s very important that we keep repeating this until it is taken into consideration,” he said.

Mbakeh Camara, Head of University Relations and Innovation at the University of the Gambia and Founder of Be Inspired Internationally, and Natasha Kimani, Head of Programmes at Well Told Story, both emphasised that those Africans who do seek opportunities outside their country of origin were as entitled to do so as anyone else.

To change the narrative, Kimani suggested a bottom-up approach which focuses on behavioural change. “It begins when people are young,” she said. “The best time to begin with behavioural change is between 13 and 24-years-old. We should change the conversations towards agency – that people are migrating for agency. For opportunity.”

“I really think we need to change our perceptions. Think of Africa as an opportunity – a potential – and not a beneficiary of our largesse,” agreed Friends of Europe’s Director of Europe & Geopolitics Shada Islam.

In a follow-up discussion on policy, Kenneth Johannesson, a member of the Access to services for Migrants with Disabilities (AmiD) project’s Community Advisory Board and Councillor in Sweden’s Värmland region, highlighted that much can be achieved at local and regional levels.

Although at the national level, populist leaders and increasingly negative public opinion can make compromise difficult, Johannesson noted that “in the meantime, we have the human rights, we have the legislation, we have the decisions we can work with at a regional level – which means we can improve the way we are doing things.”

Among the recommendations to come from the debate were to: use data and evidence to build policies around the real picture of movement; design interventions aimed at improving lives at journey points other than Europe’s borders; provide more legal routes for migrants; cease collaborating with oppressive regimes to ‘stop migration’; engage with younger people in Europe and Africa to re-set the narrative and tackle xenophobia; and better amplify the growing positive actions being seen at grassroots level. 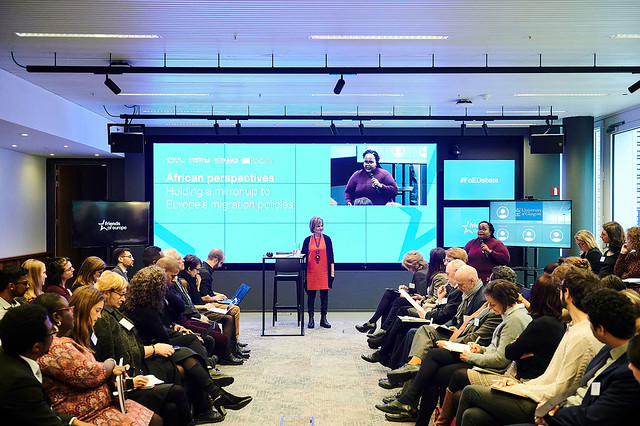 Should you have any problems viewing this album please click here.