Women entrepreneurs play an increasingly valuable role in the economy. But many still battle against gender bias and other hurdles in order to start and grow their businesses.

At the Friends of Europe debate “Women entrepreneurs: Spearheading implementation of Agenda 2030” in Brussels on 6 June 2018, five women panellists – entrepreneurs or donors – explored the chief challenges of surviving and thriving in a male-dominated business world.

Held during European Development Days 2018, the event underlined the encouraging progress of recent years. Some 10 million SMEs worldwide are now owned by women, and gender equality has become an integral part of all EU programmes. Yet access to finance for women remains tricky, especially in developing countries where getting credit often depends on land tenure.

“The world must wake up and invest in women entrepreneurs, because we failed on that for the Millennium Development Goals,” said Dorcas Apoore. This ambitious young woman created a Ghanaian basket-weaving business that went from 30 to 220 women in one year, thanks to a small loan. She said women must dare to put their business dreams into action.

There was praise for the ‘golden triangle’, or public-private-partnerships, and how the private sector can support women entrepreneurs. Angie Rozas, from The Coca-Cola Company, called women “the backbone of our business” because of their participation in numerous firms involved in local supply, distribution and retail. The company’s 5by20 programme is well on track to achieve its goal of economically empowering five million women entrepreneurs by 2020.

Capital now flows more easily to business-minded women. “We supply credit lines as well as technical assistance to support women-focused programmes for governments and entrepreneurs,” said Catherine Collin from the European Investment Bank. She acknowledged the importance of supporting women’s businesses during the riskier part of their development with equity and seed capital.

Women entrepreneurs also need the time to do business, added Odile Conchou from Agence Française du Développement, a major donor working worldwide. That can mean governments providing the sort of childcare and social security so common in France and other European countries, but still absent in most developing countries.

“We must highlight the potential benefits of empowering women entrepreneurs,” concluded Henriette Geiger from the European Commission. She said a 2015 McKinsey study noted that $12 trillion could be added to global GDP by 2025 by advancing women’s equality. The EU is playing its part there by following the EU Gender Action Plan, as well as harnessing the EU External Action Plan to boost relevant investments by combining private loans with Commission grants.

“Networks are more important than ever for women entrepreneurs,” concluded the seminar’s moderator, Shada Islam, Director for Europe and Geopolitics at Friends of Europe. “As the #metoo social media campaign showed, networks can bring issues like gender equality to the attention of a much wider public.” 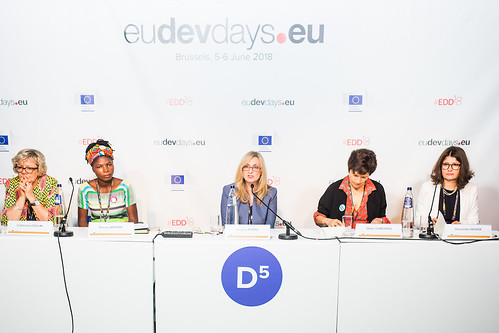 This event takes place as part of the European Development Days and will begin at 9:30 in Room D4 at Tours and Taxis (Avenue du Port 86C, 1000 Brussels). Register to the event directly via the eudevdays.eu website. Deadline for registrations is 18 May.

This lab debate will explore the important contribution that women entrepreneurs are making as regards implementation of many of the sustainable goals set out in Agenda 2030 and the challenges and opportunities they face in developing and emerging countries. The focus will be on ways in which governments and the private sector can help to address these challenges and ways in which women business leaders can be further empowered by state and non-state initiatives.

This event is part of our Development Policy Forum (DPF), which brings together a number of important development actors, including the Deutsche Gesellschaft für Internationale Zusammenarbeit (GIZ), the Agence Française de Développement (AFD), the Japan International Cooperation Agency (JICA), the European Investment Bank (EIB), the United Nations and the World Bank. Reflecting the growing role of the private sector in development, the DPF has now welcomed Coca-Cola and Eni to the forum. The DPF contributes to the global and European conversation on inclusive development. Through its activities and publications, the DPF reflects the rapidly-changing global debate on growth and development and seeks to encourage a multi-stakeholdered, fresh, up-to-date thinking on the multiple challenges facing the development community.

Women business leaders, small and medium-sized enterprises (SMEs) and local female entrepreneurs are key to growth, development and building a thriving economy. Women entrepreneurs are playing the crucial role of innovators of cutting-edge products and services, enabling a leap forward in such fields such as retail, food services, information technology, and by developing new products and processes as regards in agriculture, healthcare and other vital fields. While women entrepreneurs create new businesses, disrupt established industries and develop innovative platforms at a record pace, they still face institutional barriers to starting and growing a business that makes financial parity with male entrepreneurs a long-term challenge.

Dorcas Apoore is a team leader, mentor and trainer in her community focusing on economic empowerment, poverty reduction and social inclusion of disabled rural women. She also works on education of rural girls and women and fights against school dropouts. Apoore is currently studying development planning at the University for Development Studies in Ghana. In 2014, she founded “ASIGE Ghana” (Advocacy for social inclusion and Girls Education), a woman-based organisation that empowers women through basket weaving, currently employing 219 women.

With over 25 years of experience in the banking industry, including a special focus on development finance, particularly in sub-Saharan Africa and in the Balkans, Catherine Collin has in-depth knowledge and understanding of the EU’s financing mechanisms and institutional set-up. Through her work in Africa, Collin promotes entrepreneurship as a tool to create jobs, to support micro-, small and medium-sized enterprises through lines of credit with local banks or private equity fund and to improve lives and ensure sustainable long-term economic growth.

An ecologist and agronomist by training, Odile Conchou has over 30 years of experience in the field of sustainable development. She first worked for research institutes in France and Germany, then as an environmental engineer in an agro-industrial union and later headed an organisation for environmental professionals in sustainable development. She joined AFD in 2006, working for the Environmental and Social Support Department and PROPARCO (AFD’s private sector branch) to create and develop the Environmental, Social, Governance and Impact department. She is now developing the AFD’s new social cohesion and Gender Unit.

With more than 20 years of experience at the European Commission, Henriette Geiger was appointed Director for Geographical Coordination for East, South-East Asia and the Pacific in 2018. Prior to joining the Directorate-General for International Cooperation and Development, Geiger held the position of Deputy Director at GIZ Field Office in Guatemala. She has also worked as a Programme Officer at UNICEF in Central Africa. Throughout her career, Geiger has held various responsibilities in international cooperation, security and humanitarian affairs.

Angie Rozas is Senior Director for the Women’s Economic Empowerment Programme at Coca-Cola; a programme which has enabled over 1.75 million women act as entrepreneurs across the globe since 2010. The Coca-Cola Company’s “5by20” commitment notably focuses on economic empowerment, with the purpose of helping five million women entrepreneurs across the global market value chain by 2020. With a focus on identifying and scaling models across producers, suppliers, retailers, recyclers and artisans, Rozas works directly with business units, bottlers and NGO partners to scale up the project. With more than 24 years of experience with Coca-Cola, her expertise includes cross-functional team leadership, product development and marketing strategy.