Women face a wide range of obstacles – from weak government to traditions – that perpetuate inequality worldwide, participants told a Friends of Europe Dinner Debate on 3 June.

“Power is a human right, but women’s lives are marked by powerlessness,” Minna Salami, founder of the blog MsAfropolitan, said at the debate, “Women and Development”. “The difference between being and feeling powerless is the way that we think. We need to focus on political empowerment.”

Women’s position in many parts of the world has improved in recent decades, and the achievement of gender equality is an important priority for the post-2015 development agenda.
But women’s development is still hampered by discrimination, family traditions and actions by religious authorities – particularly in states afflicted by conflict. Though women make up half the world’s population, they represent a 70% of the world’s poor. Even in Europe, where the EU Charter of Fundamental Rights recognises the right to gender equality in all areas, women still face a large pay gap with men, said Yannick Glemarec, Deputy Executive Director of UN Women.
Remedies include setting up the kind of infrastructure that enable women to participate more effectively in society, such as childcare and other social services.

“This is not just a developing country thing,” said Glemarec. “Most women spend a lot of time in unpaid work and care. To change this you need political will.”

When measuring women’s progress in society, it is important to avoid simply counting how many are in positions of influence, said Linda McAvan, Chair of the European Parliament Committee on Development. The key factor is the difference they make once they get there.

“It is not just a numbers game,” she said. “When you get power, what is it for?”

Silvana Koch-Mehrin, Founder of the Women in Parliaments Global Forum, added that too many of the government posts currently occupied by women are soft ones that don’t come with large budgets to spend. 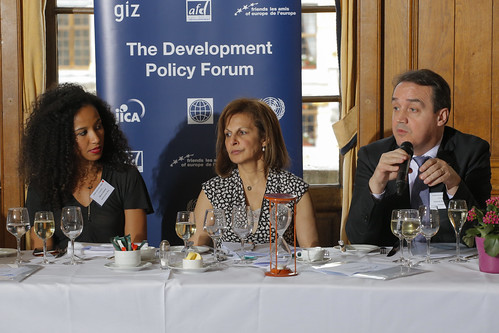 “It is important to insist on not just a change in numbers, but on impact,” she said.