With super-powers jostling for influence, how do Europe and China forge a new and more fruitful relationship, especially through tourism and culture?

At the Friends of Europe conference ‘Understanding China’s “soft power” and influence’ in Brussels on 21 November 2017, experts debated the key challenges and opportunities of fostering a better relationship between Europe and China, saying there was a need for sustained effort to bring the continents closer together.

‘Tourism can help the EU and China build trust, openness and mutual understanding,’ noted Anna Athanasopoulou, head of the European Commission’s Unit for Tourism. She highlighted the benefits of more exchanges based on culture and heritage, which will feature largely in the EU-China Tourism Year in 2018. Chinese experts said that Chinese tourists make up 20% of the world’s tourism market, but still face European visa problems. So Europe must roll out a warmer welcome to Chinese tourists – especially the young and digitally savvy – and focus on quality experience rather than mass travel.

Soft power was analysed in the conference’s second EU-China debate. Panellists agreed that China is a fast-emerging global player, despite widespread European scepticism (dubbed ‘a great wall of ignorance’ by author Diego Gilardoni) about China’s soft power goals and plans such as the Belt and Road Initiative.

With the United States increasingly isolated, Europe and China have common cause in global trade, multilateral deals and fighting climate change. Hence their need for more dialogue and cooperation in the media, cultural and artistic spheres. ‘We must promote exchanges between each other, so as to introduce China to the world and Europe to China,’ added Gao Shijun, from China Radio International. 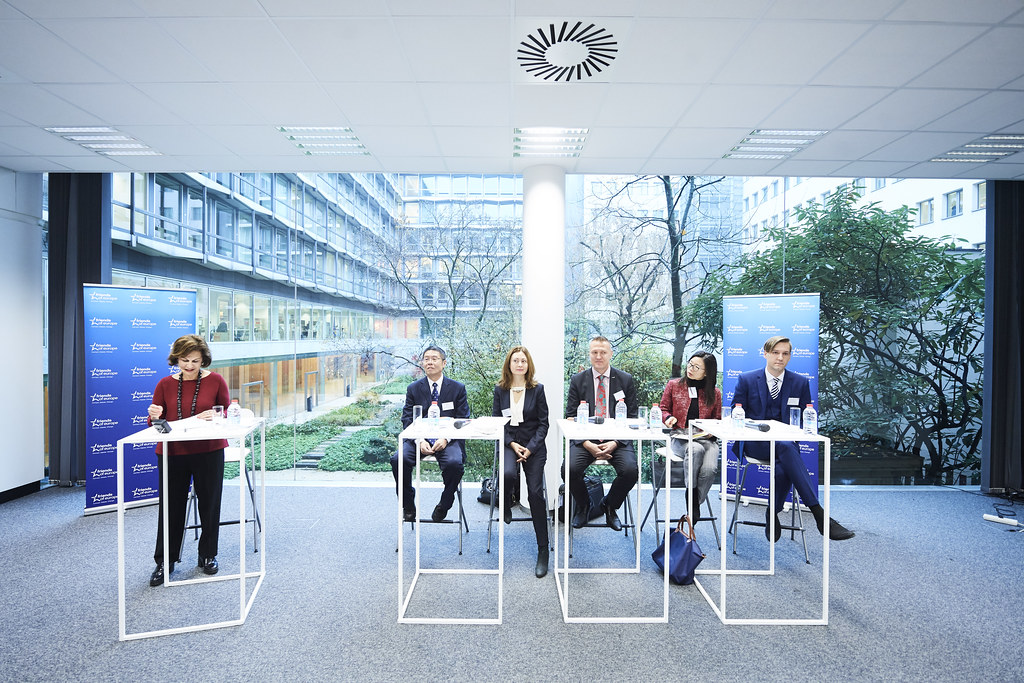 Should you not be able to see the photo gallery, please click here.

Ahead of the 2018 EU-China Year for Tourism, the conference will look at China’s growing soft power and global influence, expanding EU-China cultural ties and people-to-people relations. Its first panel will discuss the role of tourism in promoting cultural understanding, while the second will focus on China and Europe’s soft power, including the global rise of China’s creative and innovative industries and EU-China cultural cooperation.

This event, in keeping with Friends of Europe’s past conferences and publications on China and EU-China relations, will seek to provide fresh ideas and views on China and Europe’s cultural influence worldwide and on how to go beyond prevailing cultural stereotypes and misperceptions.

Tourism is a major global economic activity with wide-ranging impact on economic growth, employment, and social development. Currently ranked fourth in the world as a tourist destination, China recognises the importance of tourism in encouraging greater cultural understanding and enhancing its international image. The upcoming EU-China Tourism Year (ECTY) in 2018 provides a unique opportunity to increase visitors’ flows and investments on both sides, as well as for European and Chinese citizens to building mutual trust and confidence, contributing to the objectives of the ‘EU-China High-Level People-to-People Dialogue’.

Head of Unit for Tourism, Emerging and Creative Industries at the European Commission Directorate-General for Internal Market, Industry, Entrepreneurship and SMEs

China’s increasing prominence as a key global economic and political player has been accompanied by the breath-taking rise of Chinese soft power. Chinese policymakers are promoting the country’s rich cultural heritage and enhancing international exchanges, most prominently through the creation of more than 500 Confucius Institutes in 140 countries. China’s creative and cultural industry is thriving in response to the demands of a growing and increasingly affluent global middle class and Chinese fashion and films are capturing international attention. Europe’s soft power is also recognised as an important part of its increased public diplomacy efforts.

Director-General of the European Bureau of China Radio International (CRI)

As Head of Unit for Tourism, Emerging and Creative Industries in the European Commission Directorate-General for Internal Market, Industry, Entrepreneurship and SMEs, Anna is playing a key role in the implementation of the 2018 EU-China Year for Tourism. With more than 15 years of experience at the European Commission, she was previously in charge of culture policy in the cabinet of former EU commissioner Androulla Vassiliou, who launched in 2012 the EU-China High Level People-to-People Dialogue (HPPD), the cultural pillar of EU-China cooperation aiming to build mutual trust and intercultural understanding. Before joining the Commission, Anna worked as advisor to the Minister of Culture in Greece and was in charge of planning the cultural activities on the occasion of the 2004 Athens Olympic Games.

An expert on China’s soft power, David is currently a PhD researcher at Utrecht University, where he works on China’s public diplomacy, human rights and international politics. He has extensive experience in the field of China’s cultural promotion, having served in the Information Office of the China State Council, the governmental agency responsible for international public relations and cooperation with foreign news agencies. He is also Counsellor of the China Society for Human Rights Studies and Assistant Professor at the School of Politics and International Studies of the Central China Normal University.

Lieve is an internationally recognised Belgian artist with a special relation with China. Since her first visit in 1987, China has inspired and nourished her art. She lived for two years in Shenyang, where she created several paintings denouncing with humour the Western prejudices against China. Lieve created an exclusive installation in the Belgian pavilion at the Shanghai World Expo in 2010 and was one of the winners of the China Unlimited creative contest in 2015.

Diego Gilardoni is an internationally recognised expert and executive advisor on global business and communication. An expert on China, where he has worked as a consultant for European companies, he is the author of ‘Decoding China: cross-cultural strategies for successful business with the Chinese’, a book based on his expertise helping companies navigate the unchartered waters of globalisation by bridging the gaps between different management and business cultures. Gilardoni is a member of the international advisory board of Tsinghua University’s National Image Research Center, the leading think tank providing advice to Chinese institutions and corporations on public and corporate diplomacy strategies. He was recently Visiting Professor in Global Business and Corporate Diplomacy at the University of International Business and Economics in Beijing.

Frantisek is the China Specialist at the European Travel Commission, an international organisation responsible for the promotion of Europe as a touristic destination worldwide and mandated by the European Commission to lead the marketing campaigns surrounding the 2018 EU-China Year for Tourism. A leading expert in EU-China tourism with extensive experience in the field, Frantisek was previously responsible for establishing and directing the CzechTourism Shanghai office of the Czech Tourist Authority and was also Business Development Manager at Wings Travel, a travel agency specialising in welcoming Chinese groups in the Czech Republic.

Shijun leads the European Bureau of China Radio International (CRI) in Paris. Founded in 1941, CRI is China’s biggest media organisation specialising in international communication, with a multimedia platform including radio, internet, television and print. China Radio International has nearly 70 affiliated radio stations broadcasting in more than 60 languages. In addition to reporting on global affairs, CRI’s goal is to promote understanding and cooperation between the Chinese and peoples from other countries. Shijun is an expert in international media cooperation with more than 30 years’ experience at CRI.

Xinning is a leading expert on EU-China relations and Chinese foreign policy. He has occupied numerous research position and professorships at leading universities including the London School of Economics and the United Nations University and was a Fulbright Professor at the University of California and George Washington University. He is currently China Director at the Brussels Academy for China Europe Studies (BACES).

With more than 15 years of experience at Finnair, Mikko currently heads the international business side of the company. Finnair is a leading European airline specialising in air traffic between Asia and Europe. Over the past decade, it has been placing great strategic focus on the booming Euro-Asian market, and is fast becoming one of the biggest airlines operating between Europe and China. The company transports each year more than 125,000 passengers between Asia and Europe, and counts as many as 6 destination in China. Finnair has been awarded a number of awards, including “Best European Airline” by the TTG China Travel Awards.

Joan is a Chinese-American screenwriter aiming to bridge the gap between Western and Chinese culture. Driven by a belief in the importance of popular culture in shaping societal values, she works on creating Chinese movies that can represent modern China to global audiences. Specialising on China-Hollywood co-productions, her works include a Chinese show, “The Circle,” and a feature film, “Dark Heavens.” After studying at Harvard University and the University of Chicago, she was part of the Global Shaper programme of the World Economic Forum and was a speaker at the 2016 Annual Meeting at Davos.

Xuan leads the team of Atlas International Culture on public relations for enterprises, governments and cultural institutions. Atlas International Culture’s core mission is to connect China and Europe in the fields of arts, culture, education, trainings and business. Xuan has extensive experience working with artists, cultural professionals and creative entrepreneurs, and enjoys facilitating events and meetings, promoting cross-cultural communication and exchange between China and Europe. She is currently coordinating the programme China Arts Festival in the EU, an initiative aimed at developing and strengthening the relationship between China and the EU through cultural-oriented events.