Friends of Europe at the EU Development Days

Peacebuilding requires more time, money and planning, and should not be outsourced to armies or aid agencies, a Friends of Europe panel held at the European Development Days on 8 June has heard.

“In development, until now, a lot of it has been separating the political strategy and the financial planning,” said the European Commission’s Maria-Manuela Cabral.

EU institutions and member states signed a new “Consensus on Development” this week to help meet the UN’s 2030 sustainable development goals, one of which is to “promote peaceful and inclusive societies”.

According to Maria Victoria Llorente of the Colombian think-tank Fundación Ideas para la Paz, political leadership and vision are needed for lasting peace. “We are really divided about peace,” she said of her native Colombia, “so politics is critical. It is not only a technical issue.”

Hannes Lambrecht of the German development agency, GIZ, says proper analysis – of the “causes of conflict”, making sure to do “sensitivity monitoring” – is necessary before going into war zones.

Bringing minorities, young people and women on board is the answer for Farahnaz Ghodsinia, a European Development Days Young Leader. Behind every conflict, she says, are people who feel “left behind, unjustly treated” – like the autonomous Muslim region of Mindanao in the Philippines.

The private sector also has a role to play, but many multinationals’ strict ethics codes often require them to pull out of danger zones, starving struggling economies of jobs and investment. “We are not in conflict areas, as a company,” said Lawrence Dechambenoit of mining company Rio Tinto.

But concentrating on smaller, low-risk projects in conflict zones can deliver quick wins and “buy time” to do more strategic thinking, said Olivier Ray of the French development agency (AFD). “That’s our job: winning the peace,” he said.

To Achieve Agenda 2030, Give Peace A Chance
Start playback 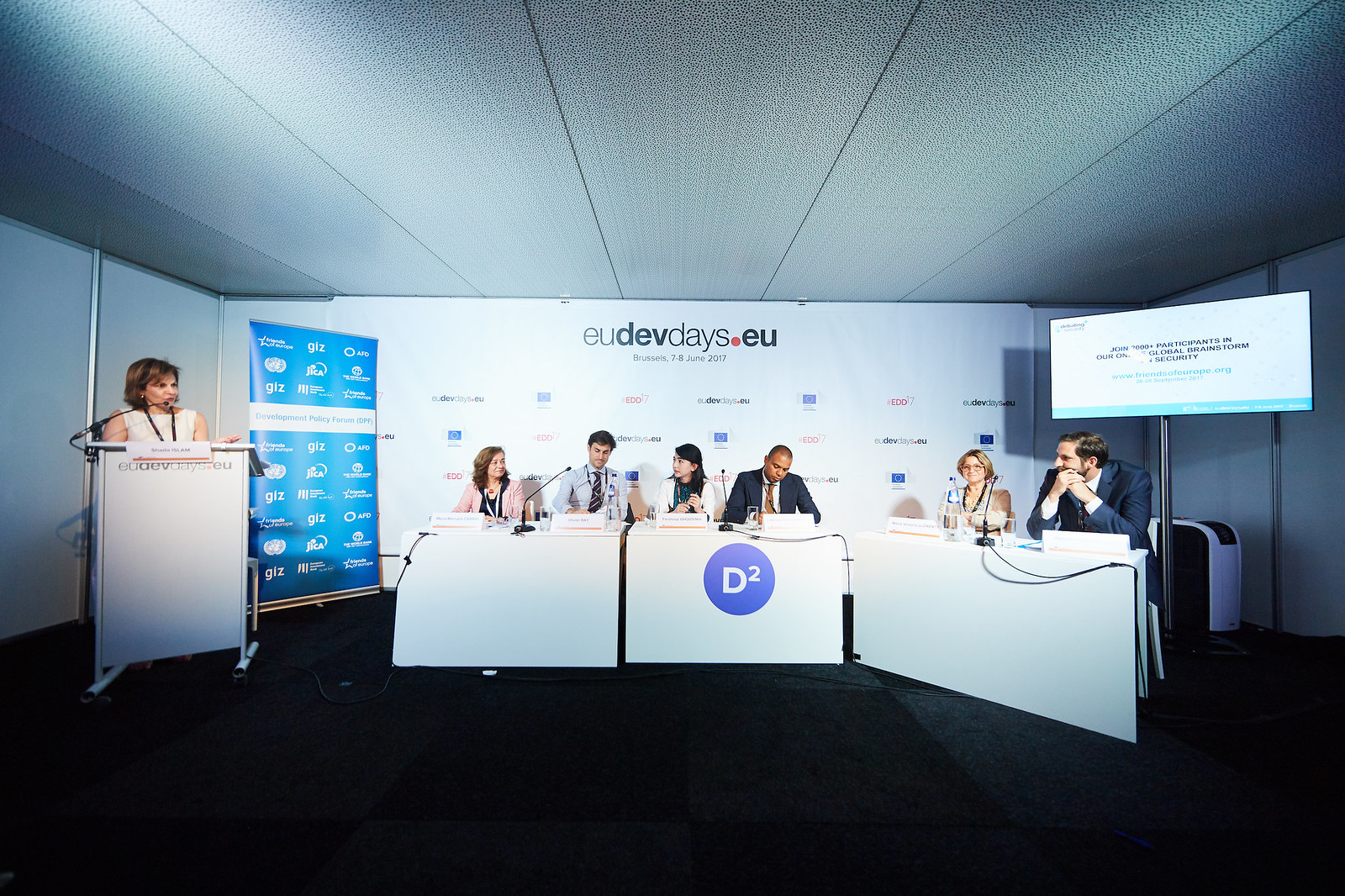 This event takes place as part of the European Development Days and will begin at 10.45 in Room D2 at Tours and Taxis (Avenue du Port 86C, 1000 Brussels).

Security and development are inextricably linked: there cannot be sustainable development without peace and security while development and poverty eradication are crucial to ensure long-term and viable peace. Instability, conflict, insecurity, violence, organised crime, corruption and other deficit deter investment, hinder trade, divert public social expenditure, and hamper access to education, health and other basic services; they also severely weaken democracy, human rights and the rule of law. Priority focus must of course be on preventive action. Peacebuilding also requires that development partners adopt a comprehensive approach to development which includes improved coordination and action and policies on many fronts including aide, trade and political dialogue. The engagement of the private sector and civil society actors is essential.

This event is part of our Development Policy Forum (DPF), which brings together a number of crucial development actors, including the Deutsche Gesellschaft für Internationale Zusammenarbeit (GIZ), the Agence Française de Développement (AFD), the Japan International Cooperation Agency (JICA), the European Investment Bank (EIB), the United Nations and the World Bank to contribute to the global and European conversation on development. Through its activities and publications, the DPF reflects the rapidly-changing global debate on growth and development and seeks to encourage fresh, up-to-date thinking on the multiple challenges facing the development community.

Head of Unit, Fragility and Resilience at the European Commission Directorate General for International Cooperation and Development

In her current position Maria Manuela Cabral is responsible for policy orientation for cooperation with countries in situations of fragility or crisis. She is also actively involved in the management of major crisis situations in such countries, providing support, guidance and tools for effective crisis management. With over 20 years of experience at the European Commission, Cabral has served as Head of Unit in the area of customs policy and has worked in the office of former EU Commissioner for Justice and Home Affairs António Vitorino.

Formerly serving as an official for the United Nations, Lawrence Dechambenoit oversaw the management of peacekeeping efforts as missions and was instrumental in mediating conflicts in the Democratic Republic of the Congo and Africa’s Great Lakes Region. Dechambenoit is also a board trustee of the African Leadership Network, a community aiming to contribute towards Africa’s prosperity by bringing influential leaders together.

Farahnaz Ghodsinia is an active advocate for conflict prevention and peacebuilding through education and inter-faith dialogue. She is the founder of “Children of Mindanao”, a programme providing educational assistance to both Muslim and Christian groups in the southern Philippines. Ghodsinia was elected as President of the 10th National Youth Parliament of the Philippines, the largest parliamentary gathering of young leaders in her country, and in 2017 was included among Lifestyle Asia’s “30 Young Gamechangers”.

Hannes Lambrecht advises the German Federal Ministry for Economic Cooperation and Development on policy developments and strategic orientation on long-term peacebuilding in relation to its Near East development cooperation portfolio. With GIZ since 2008, he has gained profound knowledge on conflict analysis, peacebuilding activities and security sector reform approaches. Lambrecht was previously in charge of a community policing project in the Palestinian Territories and held short term assignments in Lebanon and Iran.

María Victoria Llorente has led the Fundación Ideas para la Paz (FIP), a leading Colombian think tank on peacebuilding and security issues, for the past ten years. Before joining the FIP, she worked as director of a citizen security and justice programme at Los Andes University and as an associate researcher coordinating the university’s Public Peace Studies Group. Llorente has also served at the office of the High Commissioner of Peace and the office of the Minister of Defense.

Since 2014, Olivier Ray has been responsible for AFD’s strategy for situations of crisis and violence and for creating tools to operationalise it, including financial instruments and country assessments. Previously, he was diplomatic advisor to France’s Minister of Health and Social Affairs, Marisol Touraine, and also worked at the French Ministry of Foreign Affairs’ Policy Planning Department, where he was responsible for international development. Ray has also written prolifically on issues of global development.