Road vehicles of the future will increasingly move away from fossil fuels – but the speed of the transformation will depend on research into batteries and fuel cells, and the speed at which automakers commercialise vehicles that use them.

A Friends of Europe Café Crossfire on 27 March debated this topic, which has enormous stakes for the future of European industry. Vehicle manufacturing is one of the biggest employers in the EU, and changing the industry’s core technology has the potential to trigger upheaval. Although the market for electric vehicles, that run off either batteries or hydrogen fuel cells, is still small, it has started to grow fast, and the list of countries planning to ban internal combustion engines is expanding rapidly.

Requirements for success include advances in battery and fuel cell technology and the ability to generate cheap renewable energy. Otherwise, the batteries or fuel cells will often be charged using power generated by fossil fuels, lessening their contribution to a reduction in greenhouse gases. “The trajectory to the future is clear,” said Greg Archer, Director of Clean Vehicles and Energy at Transport and Environment (T&E). “We believe electro-mobility will predominantly be battery-powered but will also feature hydrogen. The shift is coming because we are producing very cheap renewable energy that will power our vehicles.”

Though battery-powered cars have been fastest to market, renewable hydrogen fuel cells have the potential to overcome some of batteries’ weaknesses – in particular their limited range. Fuel cells could also help overcome a major weakness of renewable energy: its dependence on the weather. This makes it necessary to store energy to use when the sun doesn’t shine on photo-voltaic cells and the wind doesn’t blow on wind turbines. “Fuel cells store energy on a large scale, which manages the intermittency of renewables,” said Michèle Azalbert, CEO of ENGIE’s Business Unit dedicated to renewable hydrogen. “With a fuel cell, you can fill the tank in five minutes for a range of 500 km, so you get the autonomy required.”

However, there are signs that China and Japan could pull ahead in the technology thanks to the investments they are making in vehicles, batteries, renewable hydrogen fuel cells and recharging infrastructure. “We need to invest there to avoid a situation where we are lagging behind in electric batteries,” said Jean-François Aguinaga, Head of Unit for Surface Transport at the European Commission Directorate-General for Research and Innovation. 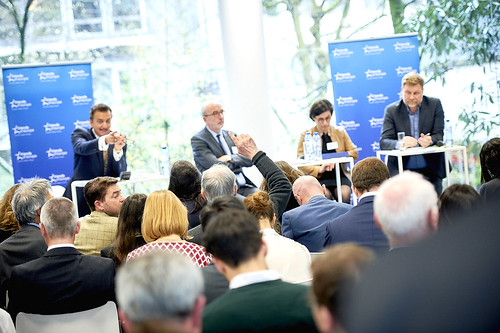 The Future of Mobility: Hydrogen and Electric
Start playback
About

Ahead of the release of the final part of the ‘Europe on the Move’ package focusing on the future of transportation and following meetings on the European Battery Alliance, mobility in Europe is on the edge of a critical transformation. This debate will explore the future of mobility, highlighting the evolving, prominent, conflictual but also complementary role electrification and hydrogen will play.

An increasing number of energy suppliers and car manufacturers are putting electrification at the core of their business, and the competition in energy storage is fierce. At the same time, research and innovation regarding hydrogen has never gained such momentum. Although the market for this type of energy source is still tiny, it is growing exponentially and represents a genuine future path for the energy and mobility transition. In addition to this, the list of countries planning to ban combustion engines is rapidly expanding, thus leaving room for the introduction of additional electrification and hydrogen mobility solutions. Anticipating the future of mobility includes thinking of mainstreaming these new solutions. Fast-paced consumer adoption may also bring new operational challenges, mainly related to infrastructure and storage. Further support to the development of electric and hydrogen vehicles together with the right policy schemes can ensure the momentum keeps going, fast-tracking the way to a low-carbon economy.

With more than 20 years of experience at the European Commission, Jean-François Aguinaga was appointed last year as head of unit for Surface Transport, where he mainly works on making transportation smarter, greener and more integrated. Prior to joining the Research and Innovation directorate, Aguinaga was considered as the ‘sherpa’ who drafted the present generation of financial instruments for Europe’s SMEs. He also contributed to the implementation of the Enterprise Europe Network, the biggest network of business and innovation services ever set-up with the support of the European Commission.

As the Director of Clean Vehicles and Energy at the European Federation for Transport and Environment Greg Archer has a deep understanding and expertise on low carbon vehicles. Archer successfully defended targets for car CO2 regulations and established the Platform for Electromobility, which aims to develop solutions to electrify European transport. At Transport and Environment he managed to expose manipulation of car testing and secure ambitious new regulations and proposals for improving vehicle testing.

As a CEO of ENGIE renewable hydrogen Business Unit, Michèle Azalbert is working towards clean, low-carbon economy, access to sustainable energy, climate-change mitigation and adaptation. Her career in ENGIE spans more than 6 years, during which she has worked as the Executive Vice President of ENGIE Global Market and COO of ENGIES’s Global LNG Business Unit. Throughout her career Azalbert held various responsibilities in the treasury, financing and market risk management fields at Elf Aquitaine, Sanofi and Suez.