Is the EU executing the decisive gear-shift that is needed to not only meet its own ambitious climate targets and agree on its vision for climate neutrality by 2050, but to successfully lead the way globally?

Experts gathered at the Friends of Europe debate ‘Shifting gears: achieving climate neutrality by 2050’ – held in Brussels on 19 February – to assess where Europe is at, what it needs to do, where it’s going and whether it will arrive on time.

Moderator and Director of Insights at Friends of Europe, Dharmendra Kanani said that with a new Commission in place and its ambitions stated via the European Green Deal, the imminent unveiling of the new European Climate Law, the assessment of member states’ National Energy and Climate Plans, and the COP26 coming up in Glasgow in November, it’s an interesting time for the climate agenda that has a “last chance saloon” feeling about it.

“Everyone is really thinking of Glasgow as the tipping point that we should look forward to – but should it be, can it be, given all the different drivers that are at play, not least politics?” he said, adding that the constant re-negotiation of targets was delaying action.

There was agreement that more needed to be done to create the conditions for consumers to more easily transition to renewable energy sources, and that Europe – which accounts for 9% of global CO2 emissions – must use its ambition to take an assertive leading role in getting other countries on board with tackling the climate emergency. 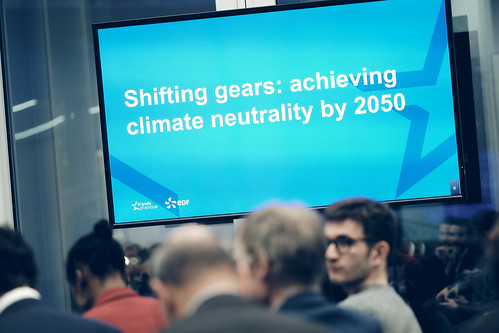 To achieve a net-zero emissions economy, the EU, with all its institutions and member states will have to declare an emergency and put itself in a ‘climate war room’ mode. It will have to make use of its most cost-efficient energy carriers, as well as develop a multi-sectoral industrial strategy in line with climate neutrality. For Europe and all its member states, it means first adopting the European Commission’s long-term vision for a climate-neutral economy by 2050, revising its 2030 targets, mainstreaming climate actions across all policies and industry sectors. It also implies ensuring coal and fossil fuel subsidies are phased-out while energy sources with the highest returns on investments and productivity are supported. If these policy measures and technology solutions are seriously considered, the EU will be able to ratchet up its ambition and reach its moonshot mission for climate-neutrality, and on time. 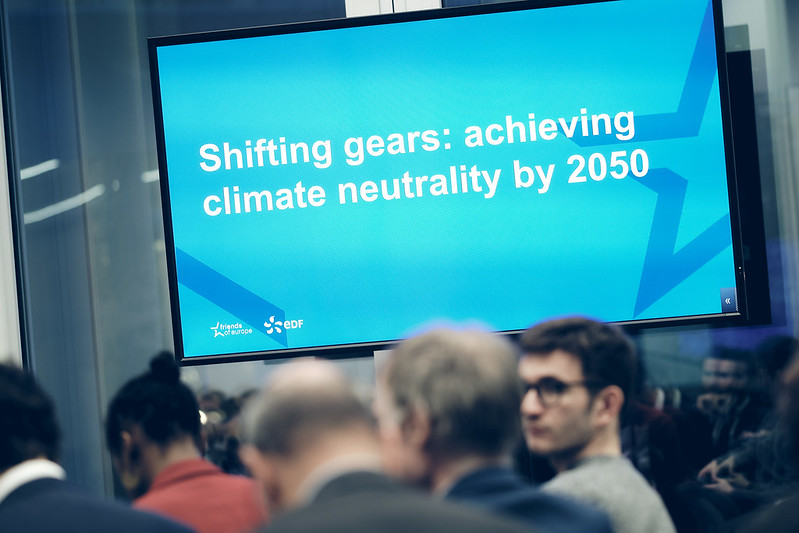 To achieve a net zero emissions economy, the EU will have to declare an emergency and put itself in a ‘climate war room’ mode. It will have to make use of its most cost-efficient energy carriers, as well as develop a multi-sectoral industrial strategy in line with climate neutrality. For Europe and its member states, it means first adopting the Commission’s long-term vision for a climate-neutral economy by 2050, revising its 2030 targets, mainstreaming climate actions across all policies and industry sectors. It also implies ensuring coal and fossil fuel subsidies are phased-out while energy sources with the highest returns on investments and productivity are supported. If these policy measures and technology solutions are seriously considered, the EU will be able to review its ambition upwards and reach its moonshot mission on climate-neutrality, and on time.

Senior Vice-President for European and International Affairs at EDF Group, and Diplomatic Advisor to the CEO

As Chief Energy Modeller, Laura oversees the Agency’s work on outlooks and forecasts and is in charge of overall consistency of modelling work and resulting messages. Laura is also Head of the Demand Outlook Division with responsibility of producing the annual World Energy Outlook, the IEA flagship publication. The Division produces medium to long term energy demand, efficiency, power generation, renewables and environmental analysis for the World Energy Outlook and other publications.

In his current role, Erkki Maillard is in charge of supervising the definition and implementation of EDF’s strategy supporting CO2-free regulations and projects in the EU and abroad. Maillard draws from more than fifteen years of professional experience in European and diplomatic affairs both for government entities and the private sector. He previously served as head of the India section at the French Ministry of Foreign Affairs, before joining the EU constitutional treaty task force. As a diplomat, he was posted to a number of countries, including to China and Italy, where he served as deputy head of mission. Maillard was then appointed as advisor to the French Minister of Foreign and European Affairs, before being promoted to chief of staff of the Minister of European Affairs. He then also served as chief of staff of the Minister of Higher Education.

Paula Pinho is responsible for energy policy coordination and notably for strategy, planning and legal questions at the European Commission. Previously, she served as a member of cabinet for Günther Oettinger, both in his capacity as EU Commissioner for Digital Economy and Society and during his mandate as EU Commissioner for Energy. Recently, Pinho coordinated the preparation and adoption of the ‘Clean Energy for all Europeans’ package and represented the Commission in the negotiations of the Proposal for a Regulation on the Governance of the Energy Union. In her current role, Paula is overseeing the coordination of the assessment of the National Energy and Climate Plans (NECPs).

Wendel Trio has been in charge of CAN Europe since September 2011. Before taking on the lead of the biggest climate change NGO network, he spent over 20 years working at some of its biggest member organisations. This has included serving as political director for Oxfam in Belgium, as campaign director for Greenpeace Belgium and as the international director of the Policy and Business Unit of Greenpeace International. His active engagement on climate policy first began in 1992, as representative of the Belgian national Advisory Council on Climate Change and Sustainable Development to the World Conference on Environment and Development in Rio de Janeiro.

Read more about "Three scenarios for a Covid-19 world: we can still make the right choices"

Read more about "Africa, Europe and Friends of Europe"

Read more about "Feminism is not a numbers game, it’s about inclusion"

Read more about "Europe’s approach to AI governance: time for a vision"

view all insights
Read more about "Bailouts, Bonds and Trust"