Momentum to increase the collection and recycling of plastics is growing, said experts at Friends of Europe’s 14 May event: ‘Sharpening EU leadership in plastics recycling’ in Brussels. “The pace seen in the last four years is quite impressive,” said European Commission Vice-President for Jobs, Growth, Investment and Competitiveness, Jyrki Katainen.

Recent EU legislation includes the 2015 ‘Plastic Bags Directive’ and the 2018 ‘EU Plastics Strategy’. Most notably, the March 2019 ‘Single-Use Plastics Directive’ will signal the end of all single-use items including plastic straws and cotton buds, as well as setting ambitious goals such as collecting 90% of plastic bottles by 2029 and radically increasing the amount of recycled plastic content.

In December 2018, the Commission also proudly launched the ‘Circular Plastics Alliance’ which seeks to ensure that 10mn tonnes of recycled plastics are reused as new products by 2025. Similarly, on 21 February 2019, France and the Netherlands adopted the ‘Plastics Pacts’ with ambitious recycling and recycled content targets.

Companies like Danone are also keen to contribute to the fight against plastics waste. Its October 2018 commitments include pledges to make all of their packaging 100% recyclable, reusable or compostable and to create PET drinks bottles that contain 50% recycled material by 2025.

However, conference participants heard that more must be done to expand the existing waste management infrastructure, increase consumer education and boost the plastics economy. One main issue is that recycled plastics still do not find their way into products. The failure to reuse plastic material after its first use leads to an annual economic loss of approximately €70 to €105bn.

Secondly, although Europe has the world’s highest rate of plastics recycling, roughly 31% in 2017, most of its waste still ends up in landfills across Europe or overseas, exacerbated by the plastics exports crisis.

Thirdly, while industry initiatives and collaborations continue to try and cut down marine litter, the UN’s first-ever Ocean Conference, held in June 2017, highlighted the sad fact that there will be more plastic than fish in the oceans by 2050.

“More than 80% of what we find in the sea comes from packaging”, said André Abreu, Head of International Ocean Policy at Tara Expéditions Foundation, urging participants to recognise that the ocean’s biodiversity is under threat.

Ultimately, there is no ‘silver bullet’ solution to problems like the lack of demand for recycled plastics, Katainen admitted. The private sector is ready to supply more than 11mn tonnes of recycled consumer packaging by 2025, but there is only demand for 6.4mn tonnes, he noted.

One gamechanger will be “creating a European standard for packaging plastics” and degradable plastics that do not become microplastics upon fragmentation, asserted Katainen. This recycling standard would “create a new market for packaging waste” and would one day be emulated worldwide, he said: “So things we are doing here may change the world”. 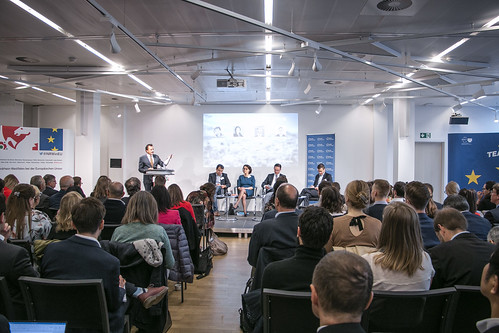 Europe is still far from having the right recycling framework to achieve its 55% target by 2030. Currently, only 31% of plastic waste in Europe is recycled. Plastics are being produced at an alarming rate and have a severe impact on the environment as reuse is extremely limited. The consequences of intensive plastics production need to be monitored and taken into account. Europe must share best practices, form the right alliances and develop a robust recycling framework that encourages its industries to produce more responsibly.

In March 2019, the European Parliament voted in favour of a motion that would phase out a number of single-use plastic items across the EU by 2021. The new law sets a 90% collection target for plastic bottles by 2029, committing Member States to this goal. Furthermore, plastic bottles will have to contain at least 30% recycled content by 2030. The European Parliament, alongside several forward-looking Member States, is taking the first steps towards the establishment of a circular plastics economy. While the focus should remain on reducing the use of plastics, plastic waste should also be accounted for. Replacing single-use plastics with innovative alternatives presents the EU with a significant opportunity, given that 95% of the value resulting from plastics production is lost to the economy, amounting to a loss of somewhere between €70bn and €105bn per year. However, the demand for recycled plastics in Europe today stands at only 6%. Therefore, the EU must develop a more robust recycling framework that encourages its industries to produce more responsibly.

In his current role as European Commission Vice-President for Jobs, Growth, Investment and Competitiveness, Jyrki Katainen is at the helm of the Circular Plastics Alliance. The Circular Plastics Alliance gathers key stakeholders to promote voluntary action by industry for more recycled plastics. Katainen also plays a leading role in the EU Bioeconomy Strategy, published by the European Commission in October 2018. Before joining the European Commission, Katainen served as Prime Minister of Finland from 2011 until 2014 and as Minister of Finance from 2007 until 2011.