When a country’s security is threatened, UN peacekeepers must intervene only after politicians have exhausted all possibilities for conflict prevention. This key conclusion emerged in the first debate in a new series of ‘Lessons from history’, held in Brussels by Friends of Europe on 19 March 2019. Featuring three peace and security experts, focused on UN operations in Africa, the event aimed to better prepare for future crises.

“We can learn lessons from UN peacekeeping operations in Africa, home to around half the UN’s work in that field,” said the moderator Jamie Shea, Senior Fellow, Friends of Europe and former Deputy Assistant Secretary General at NATO. He wanted to look at Rwanda and Liberia, respectively considered as a failure and success in UN peacekeeping.  What more can the EU and NATO do to support peacekeeping on this continent and beyond?

All three panellists agreed that countries and peacekeepers must prioritise the prevention of conflicts, with intervention only a last resort. That is more important than ever, noted Alice Musabende – a survivor of the 1994 Rwanda genocide and now an academic at Cambridge University – because conflicts are increasingly complex and involve new peacekeepers such as China.

“Rwanda was the greatest failure in UN history, but it was not a UN failure, it was ours,” said Linda Melvern, Investigative Journalist and former consultant to the ‘Military One’ trial at the International Criminal Tribunal for Rwanda (ICTR). She said some UN peacekeepers had tried their best to defend the Tutsi population during the genocide. However there was a shocking lack of accountability from UN member states and decision-makers for the UN’s withdrawal in April 1994 from most of its peacekeeping operation (UNAMIR) in the country. Even today, many of the peacekeepers involved have not been properly debriefed.

Rwanda did lead to the African Union (AU) taking more responsibility for intervening in the continent’s conflicts, added Ms Musabende. However, the AU is still under-resourced and mainly relies on funding from the EU, hence the importance of partnerships like this in peacekeeping. Rory Keane, Head of the UN Liaison Office for Peace and Security in Brussels (UNLOPS), noted that Rwanda and other conflicts had also led to reforms in the UN. These include better pre-deployment training for peacekeepers, plus a merger of the peace operations and political teams.

The 15-year UN peacekeeping mission in Liberia ended in March 2018 and is roundly considered a success story. For Mr Keane, it underlined the value of a long-term investment in peace, having an exit strategy (the UN lacked this in Libya, leading to chaos and instability) and linking UN operations with local structures. He also said women played a vital role in the peace process, backed later by a female UN peacekeeping force from India.

As for the EU, panellists praised its partnership with UN peacekeepers and its security capacity building, among other assets. According to Ms Musabende, Europeans and others must also stop “meddling in Africa and learn to listen more to what Africans themselves want in times of conflict.” 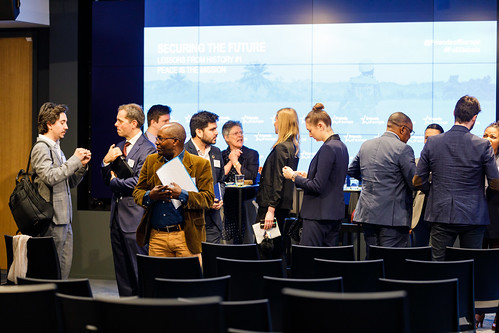 Securing the future: lessons from history #1
Start playback
About

This event ‘Peace is the mission’, will explore two different UN peace missions focusing on their different challenges, successes and failures in order to draw conclusions and lessons for today’s transnational and multi-faceted conflicts.

In our series of ‘Lessons from History’ we take a step back and understand history’s profound effects on our world, allowing us to better prepare for the future. Our first event in the series ‘Peace is the mission’ will explore lessons from two UN peace missions: The United Nations Assistance Mission for Rwanda (UNAMIR) and the United Nations Mission in Liberia (UNMIL). One mission regarded as an international failure to respond to people in need, whereas in the other all mission objectives were met. We will examine the different outcomes of these two peace missions to find applicable lessons for today’s transnational and multi-faceted conflicts.

What can the UN do to bring conflicts to an end and ensure a stable post-conflict process? What are the exit strategies? What is it lacking?
How have UNSC resolutions, such as 1325 on Women, Peace and Security helped evolve peacebuilding?
What role should the UN Security Council and UN Peacebuilding Commission play in setting new norms for effective and successful peace processes?

Speakers include
Rory Keane, Head of the United Nations Liaison Office for Peace and Security in Brussels (UNLOPS)
Linda Melvern, Investigative Journalist and former consultant to the “Military One” trial at the International Criminal Tribunal for Rwanda (ICTR)
Alice Musabende, Gates Scholar in Politics & International Studies at Cambridge University, former Canadian journalist and survivor of the 1994 Rwanda genocide

Rory Keane heads the United Nations Liaison Office for Peace and Security in Brussels (UNLOPS), which represents the UN Departments of Peacekeeping Operations, Political Affairs and Field Support in building partnerships with the EU, NATO and other organisations. He has worked for the previous United Nations Special Envoy for the Sahel Region, Romano Prodi, and served as the security sector advisor to the Special Representative of the UN Secretary General in Liberia. Prior to that, Keane was Team Leader of the OECD International Network on Conflict and Fragility, the European Commission desk officer for the DRC and Great Lakes and as the OSCE Spokesperson in the former Yugoslavia.

Linda Melvern is a widely published British investigative journalist, former member of the London Sunday Times Insight Team and a former consultant to the “Military One” trial at the International Criminal Tribunal for Rwanda (ICTR). Melvern has researched and written about the 1994 genocide since it began. She published the earliest account of the international failure to intervene, exposed Security Council secret debates and is the first journalist to describe the abandonment of Lt. General Roméo Dallaire. She is currently writing, Intent to Deceive, a companion volume to A People Betrayed, The Role of the West in Rwanda’s Genocide, and Conspiracy to Murder, The Rwandan Genocide.

Alice Musabende is a Gates Scholar at Cambridge University, focusing her research on the normative dynamics of peacebuilding in post-conflict countries in the Great Lakes of Africa. Born and raised in Rwanda and a survivor of the 1994 genocide, Musabende has spoken and written extensively about that historic tragedy. As a journalist, she has covered and commented on international justice, war crimes, Canada’s foreign policies in Africa, women in post-conflict settings and peacebuilding. Her work has been published in The Globe and Mail, Vice News, CBC Radio, and elsewhere.

Retiring from NATO in September 2018 after 38 years at the organisation, Jamie Shea has occupied a number of senior positions at NATO across a wide range of areas, including external relations, press and media and policy planning. As NATO’s spokesperson, he was the face of the Alliance during the Bosnia and Kosovo conflicts. He later worked as the Director of Policy Planning in the private office of former Secretary General Rasmussen during the preparation of NATO’s 2010 Strategic Concept. Shea is also a regular lecturer and conference speaker on NATO and European security affairs.
Partners