Integration is central to European immigration policies, yet often fails to deliver the expected benefits for both newcomers and local communities. At Friends of Europe’s 18 June Policy Insight debate “Refugee integration through inclusion: a whole-of-society approach to fighting cultural divisions” panellists and participants explored challenges and best practices when it comes to refocusing integration efforts on creating fully inclusive societies.

Held during the European Development Days, the occasion served also as the launch of Friends of Europe’s latest discussion paper “Europe’s migration challenge: from integration to inclusion”.

The debate underlined how migrants, refugees and other minority groups continue to face discrimination despite integration efforts. “Even with legal status, they may struggle to get a job or engage as citizens,” said Shaza Al Rihawi, Founder of the Network for Refugee Voices and a member of the European Migrant Advisory Board.

But this discrimination is not limited to newcomers alone. “Minorities are not related to the refugee category,” said Yasmine Ouirhrane, 2019 Young European of the Year and European Development Days Young Leader. “They are immigrants’ descendants. Across Europe their situations are different, but they face the same pattern of discrimination and exclusion that refugees do.”

Taking a whole-of-society approach to inclusion is widely seen as the best way forward, as it creates dialogue between locals and newcomers and cultivates a sense of belonging. This approach is valuable in a development initiative like the Deutsche Gesellschaft für Internationale Zusammenarbeit (GIZ)’s Qudra Programme. The programme helps local authorities in the Kurdistan Region of Iraq to improve basic public services for refugees, internally displaced persons (IDPs) and the local population. In Team Leader Jenny Hornisch’s words, “No one gets left behind.”

To work across the board, such programmes will need to redesign systems to be more participatory and human-centric. In several Belgian cities, carefully designed spaces now enable diverse groups of people to meet and mix, according to Rozina Spinnoy, Founder of Business Improvement Districts (BIDs). Such spaces, supported by local authorities and businesses, are proven to boost inclusion of everyone and to forge resilient communities.

Policymakers and practitioners need to keep such inclusion-focused initiatives in mind when they are thinking about how to overcome inequalities in Europe. “We want a Europe that is strong, united and celebrates its diversity,” concluded Shada Islam, Friends of Europe’s Director of Europe & Geopolitics. “Unity in diversity is a good motto, but we have to walk the talk.” 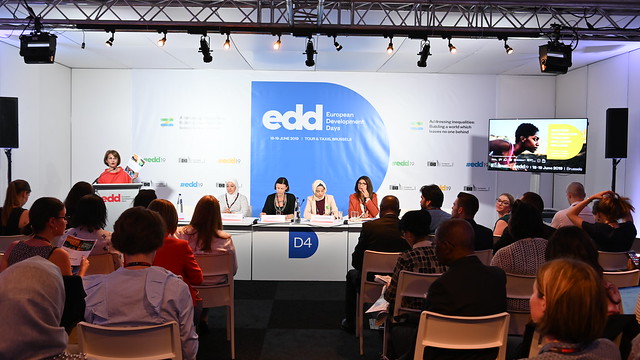 This event takes place as part of the European Development Days and will begin in room D4 at 15.15 at Tours and Taxis (Avenue du Port 86C, 1000 Brussels).

Register to the event directly via the eudevdays.eu website. Deadline for registrations is 9 June.

Photo by Matteo Paganelli on Unsplash

Refugees must have easy access to skills training, education, affordable housing and jobs as they settle into their new homes away from home. Experience has shown that those designing such services must take an inclusive and whole-of-society approach so that all community members are treated equally. Programmes targeting refugees alone can instil a feeling of exclusion among established local community members with similar needs who may feel they are being neglected. This can deepen divides and make people more vulnerable to the toxic “us and them” rhetoric espoused by populist politicians and those who fear the arrival of foreigners in their towns and cities. Such “privileges” can also be an unwelcome reminder to new arrivals of how they differ from their neighbours and inspire a feeling of “victimhood” which hinders integration.

Shaza Al Rihawi is a human rights activist and Syrian refugee based in Germany. With first-hand experience in dealing with refugees and cases of sexual and gender-based violence, she previously worked for the UN Refugee Agency (UNHCR) in Syria, as well as with the United Nations Relief and Works Agency (UNRWA) and the Centre for Strategic Studies in Syria. Al Rihawi is a leading member of a number of refugee- and migrant-led organisations, including the Network for Refugee Voices, the Global Refugee-led Network (GRN) and the European Migrant Advisory Board, an initiative of the EU Urban Agenda’s Partnership on Inclusion of Migrants and Refugees. She also works at the Leibniz Institute for Educational Trajectories for a project on refugees in the German educational system.

Jenny Hornisch’s current work focuses on strengthening the resilience of refugees, internally displaced persons (IDPs) and host communities. She has spent the past eight years working with GIZ in crisis- and conflict-affected contexts across the Middle East. Hornisch’s recent work in Palestine focused on protecting and promoting women’s rights through increasing female representation in socioeconomic decision-making and local government, as well as raising awareness of gendered issues at the municipal level. Her areas of expertise include good governance, fragility and conflict, migration and displacement.

Yasmine Ouirhrane is the co-founder of We Belong, a platform and podcast that amplifies the voice of the New Daughters of Europe. She also served as an appointed expert for the European Union and the African Union and she delivered dozens of recommendations to international institutions, including the World Bank, Foreign Affairs Canada and Wilton Park UK Foreign Office. She provided workshops on access to education, equal opportunities and social entrepreneurship for Tony Blair Institute, Change.org, EM Business School and WISE Qatar, among others. She was recognised Young European of the Year 2019 by the Schwarzkopf Foundation, EDD Young Leader by the European Commission, Women Deliver Young Leader and she is a member of the Gender Innovation Agora at UN Women.

With the aim of combining her academic background in interior design with her passion for remedying societal issues, Rozina Spinnoy founded BIDs Belgium, an organisation bringing public-private partnerships to specific areas within municipal districts. The organisation focuses on championing the value of inclusive education and ‘designing’ inclusive communities. Spinnoy’s work also includes the social and digital inclusion project Analogue to Digital, which has a focus on vulnerable and neuro-diverse youth. Her design management experience overlaps a wide variety of sectors, including education, equality, inclusion, women’s issues, mental health, urban place-making and civic participation.