The world’s food system is riddled with problems and contradictions. Millions of people in poor countries are still hungry; yet millions in rich countries are suffering from obesity. Meanwhile, the use of land and water for agriculture is eroding the environment, and food consumption is responsible for 31% of EU greenhouse gas emissions.

“Our western diets cannot be made universal,” said Olivier de Schutter, a law professor who was UN Special Rapporteur on the Right to Food until this year. “I think we need a food policy. We need realistic strategies that bring all this together.”

The LiveWell project for Low Impact Food in Europe (LIFE) project is grappling with these difficulties. It aims to show that a diet that reduces greenhouse gases can also be healthy, nutritious and affordable. It does this by, for example, suggesting diets adapted for three pilot countries – France, Spain and Sweden. Livewell also brings together business, policy makers and civil society, aiming to generate maximum support for sustainable diets.

“You don’t have to be vegetarian,” said Duncan Williamson, Food Policy Manager at WWF UK at the LiveWell final conference, organised by Friends of Europe and WWF. “You just need to moderate meat consumption. Livewell for LIFE was about raising awareness. Now it is about actions.”

Some 800 mln people in the world are suffering from hunger, many of whom need more protein in their diet, said Jean-Pierre Halkin, Head of Unit for Rural Development, Food Security and Nutrition at the European commission Directorate General for Development and Cooperation. “This is one of the most extreme forms of inequity.”

However, the world’s current meat production system has been sharply criticised for its waste and environmental impact. For example, grasslands in the southern hemisphere have been converted for crop-growing to feed animals for meat production in richer countries. As a whole, humans’ ecological footprint – the burden they are placing on the earth’s ecosystem – is 1.5 planets. Tony Long, Director at the WWF European Policy Office, said that Europeans are more wasteful than the average, living on the equivalent of 2.6 planets. “That means we are living at someone else’s expense.”

Overconsumption is now weighing on healthcare systems. Europeans consume in 95 kg of meat a year on average, and 7% of EU healthcare costs are related to obesity or overweight, said de Schutter. He said we should reduce meat consumption to 20 kg a year.

But that is hard while the food processing industry provides cheap, convenient food for an increasingly busy population. “People have less time to cook or prepare healthier alternatives,” he said. “So they buy convenience foods instead.”

Public health education can help encourage healthier, more sustainable diets. The French government has for some years been delivering messages on the desirable intake of things like vegetables and dairy products.

However, these guidelines are only followed by a minority of the population, said Agnès Martin, Science and Nutrition Director for Dairy R&D at Danone Nutricia Research. “Policy messages are not enough,” she said. “Changing food choice behaviour is difficult.”

This conference was organised as part of the LiveWell for Low Impact Food in Europe (LIFE) project, which is funded with the contribution of the EU’s LIFE+ Programme for the Environment. 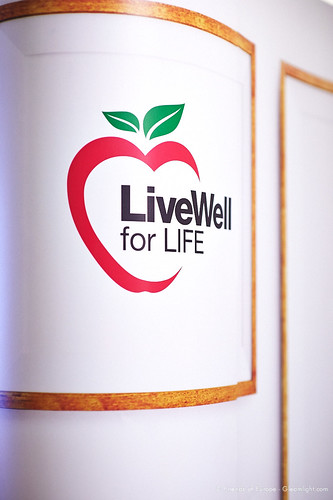 The world’s food system is riddled with problems and contradictions. Millions of people in poor countries are still hungry; yet millions in rich countries are suffering from obesity. Meanwhile, the use of land and water for agriculture is eroding the environment, and food consumption is responsible for 31% of EU greenhouse gas emissions.

LiveWell for LIFE plays a key role in the European sustainable diets debate. The project looks at health, nutrition, carbon and affordability and demonstrates how low-carbon, healthy diets can help us achieve a reduction in greenhouse gas emissions from the EU food supply chain. The project contributes to this long term vision by demonstrating what sustainable diets look like for EU Member States, facilitating a conducive policy environment, developing tangible pathways for implementation of sustainable diets and disseminating this widely across Europe. This ground-breaking project works with the Network of European Food Stakeholders – key stakeholders from the food supply chain and EU and national policy makers to ensure sustainable diets forms part of a future policy agenda.
The project is funded through the EU’s LIFE Programme for the Environment and has been implemented over three years (2011-2014) by WWF (WWF-UK, WWF European Policy Office) and Friends of Europe.
For more information on the project, please check: www.livewellforlife.eu.

How attainable is meeting the global goal of sustainable food and nutrition security in light of the unprecedented increase in population growth, a global shift towards western diets and the effects of climate change? The world’s richest countries have to contend with food overconsumption, unhealthy dietary patterns and increases in some chronic diseases, while the developing world is being faced with the double burden of malnutrition, through both under and overconsumption. Farmers are under pressure to produce more food, while a changing climate further slows down production growth. At the same time one third of food is wasted. A more sustainable global food system requires these problems to be addressed through an integrated strategy. What is the role of food consumption in this equation? What changes in agricultural investment, business practices and international trade conditions are needed? How should national governments, multilateral organisations and businesses respond to these alarming trends in food production and consumption – in particular in Europe?

Head of Unit for Rural Development, Food Security and Nutrition at the European Commission Directorate General for Development and Cooperation

Co-chair of IPES-Food, and since May 2020 is the UN Special Rapporteur on extreme poverty and human rights.

Author of Farmageddon and CEO of Compassion in World Farming

A broad consensus seems to exist between the public and private sector on the direction of travel for healthy and sustainable diets, and many companies have committed themselves to improve their own practices to support this aim. An increasing number of stakeholders is calling for better cooperation between food chain partners to achieve real solutions at scale. This opens up possibilities for progress, but also raises questions: How can new business models, public policies and regulations work together to make sustainable choices easier for people? What can be learned from public-private partnerships on healthy diets? Can business do more by itself to help people adopt simple behavioural shifts that trigger demand for more sustainable food products? How to encourage governments to agree and adopt guidelines for healthy, sustainable diets? What successful initiatives already exist which promote more sustainable patterns of food consumption? What next steps ought to be implemented by actors of the food chain to ensure the widespread adoption of sustainable and healthy diets?

Chief Scientist and WHO Representative to the EU

Founder of the Youth Food Movement, co-owner of Brandt & Levie, and Partner at Food Cabinet

The LiveWell project showed that government policy already influences people’s food choices in a variety of ways. Most policy competence on nutrition in Europe lies with Member States, but several EU policy instruments on food safety, environment, agriculture and competitiveness play a pivotal role in Europe’s food production and consumption. The EU’s Communication on Sustainable Food, which includes sustainable food choices as a specific priority, suggests the Commission is preparing the ground for better integration. However, joint strategies towards a sustainable diet that integrates environmental, health and economic goals remains a distant goal. What concrete and coordinated policy actions could foster real change? Which policy measures and regulations would encourage a shift towards greater food sustainability in Europe? Could economic and fiscal measures, along with greener public procurement be the tools to promote more sustainable food consumption in Europe and what should EU member states be doing to create more sustainable national food policies? What do policymakers make of the opportunities and threats of an EU-level agenda for sustainable diets, and how do they see the outlook for EU support on sustainable diets? How to encourage the integration of healthy and sustainable diets into national food education measures?
Speakers

Vice Chair of the European Parliament Committee on the Environment, Public Health and Food Safety

Olivier de Schutter served as UN Special Rapporteur on the right to food from and was elected to the UN Committee on Economic, Social and Cultural Rights. Olivier was awarded Belgium’s top scientific award, the Prix Francqui, for his contribution to the advancement of EU law, the theory of governance, and human rights law. Previously, he chaired the EU Network of Independent Experts on Fundamental Rights, a high-level group of experts which advised the European Union institutions on fundamental rights issues, acted on a number of occasions as expert for the Council of Europe and for the European Union and served as General Secretary of the International Federation of Human Rights (FIDH). Olivier is also a Professor at UCLouvain and at Sciences Po Paris. He has also taught at the College of Europe in Natolin, as a Member of the Global Law School Faculty at New York University and as Visiting Professor at Columbia University.

Sirpa Pietikäinen is a Finnish member of the European People’s Party (EPP) in the European Parliament. She is a former Finnish Minister of Environment and her career at the Finnish parliament is extensive, ranging from the year 1983 to 2003. At the European Parliament, Pietikäinen is a member of the Economic and Monetary Affairs Committee and a substitute member of the Environment, Public Health and Food Safety Committee, as well as of the Women’s Right and Gender Equality Committee. In parallel, she occupies several high-level position, including Chairmanship of the Globe EU and a membership on the board of Alzheimer Europe.