“We need to consider new humanitarian financing models to deal with our global problems,” European Commission Vice President Kristalina Georgieva underlined in a conversation with Friends of Europe on January 26. “We have to diversify if we want to fill the gap in humanitarian financing and then it is simply a question of creating the right momentum.”

Friends of Europe’s discussion with the Vice President considered the findings of the United Nations High-Level Panel (HLP) on Humanitarian Financing in the lead up to the first ever World Humanitarian Summit (WHS) to be held in Istanbul on 23-24 May 2016.

While the debate on humanitarian financing in Istanbul will be complicated by the global economic slowdown and widespread donor fatigue in humanitarian circles, “in a sense, this summit is being held at the best of times because humanitarian crises are on the global agenda as never before,” noted moderator Shada Islam, Director of Policy at Friends of Europe.

The findings of the HLP are highlighted in its report, entitled ‘Too important to fail – addressing the humanitarian financing gap’, released in Dubai in January 2016. The well-timed report comes as the refugee crisis in the Middle East and Europe continues unabated and as 60 million displaced people struggle through conflict and natural disasters worldwide.

Faced with what United Nations Secretary-General Ban Ki Moon calls ‘the age of the mega-crises’, the international community needs to strive to improve the way in which it responds to the needs of the most devastated people in the world, Georgieva said.

The number of people living in fear and flight, homelessness and hunger, has quadrupled since the beginning of the century. “If we imagine that these people were the population of a single country, this country of 125 million would be the 11th largest – and fastest growing – in the world,” she added.

The main message of the HLP’s report is that this imaginary country, located as it is in a world with a collective GDP of $78 trillion, should not exist. “In this wealthy world of ours, no one should die or have their dignity destroyed because of a lack of money,” she stressed.

While working to extend humanitarian financing to cover the needs of those in crisis is the morally correct thing to do, in such an interconnected world, it is also in the best interests of all global citizens.

The data is striking. Last year alone, the international community collected $25bn in humanitarian aid, more than twelve times the $2bn collected in 2000. While never before has the world been so generous, increasing fragility owing to unresolved conflicts and natural disasters means that never before has this generosity been so insufficient, the Vice President concluded. 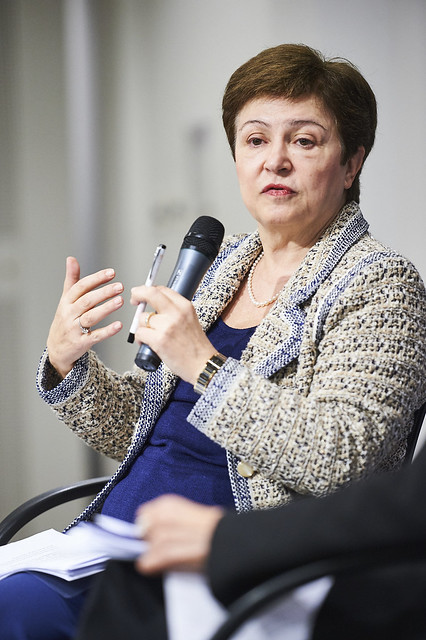 Join Friends of Europe for a conversation with European Commission Vice President Kristalina Georgieva on her tasks and priorities as co-chair of the United Nations High-Level Panel on Humanitarian Financing. We’ll be welcoming Ms Georgieva on January 26 and asking her about: