Speakers during the policy insight, organised by Friends of Europe and entitled “Frozen conflicts: thawing tensions in the EU’s eastern neighbourhood,” examined the current political and geopolitical context in various regions of the EU’s southern neighbourhood, following Russia’s recent invasion of Ukraine.

The situation in Transnistria, Abkhazia, South Ossetia and Nagorno-Karabakh are “still far from stable”, said Jamie Shea, Senior Fellow at Friends of Europe and the moderator of the event.

Shea added that the conflict in Ukraine has both diverted attention away from what is happening elsewhere, but also refocused attention “because everyone is waiting to see what the impact will be on Russia’s designs in the Euro-Atlantic region”.

Zeljana Zovko, Member of the European Parliament, explained that since the 2020 ceasefire following the 44-day war in Nagorno-Karabakh, regular skirmishes have continued to take place, and last week Russian peacekeepers accused Azerbaijan of breaking the ceasefire agreement.

“Both parties need to start negotiations on sustainable settlements with clear border demarcation and delimitation,” she said, adding that the Ukraine war will “directly impact the situation”.

“The EU should avoid Russia dominating the peace talks as happened in 2020, and the EU must be actively involved in the Southern Caucasus,” she said.

“We have to be vigilant and make sure the war in Ukraine doesn’t increase tensions within these frozen conflicts,” she emphasised. “We cannot predict whether President Putin will want to reopen frozen conflicts, either to divert attention away from Ukraine or to regain ground.”

She concluded by welcoming the role of civil society and international bodies such as UNESCO “to help find a path and respect the shared heritage in Nagorno-Karabakh”.

“This is a destabilising time for people in eastern partnership countries who have not known peace for many decades,” said Hamida Giyasbayli, journalist and human rights defender.

“In the past month, Armenia, Azerbaijan, Georgia and Moldova have tried to balance the necessity for good relations with Russia and support Ukraine’s territorial integrity,” she said.

“Yet the population has shown discontent about these policies for neutrality, which are being driven by terror experienced in [the] previous century.”

“If war in Ukraine doesn’t stop soon, destabilisation in eastern partnership countries will be unavoidable,” she stated.

Giyasbayli highlighted that the EU, NATO and the OSCE have “lost their trust” among the population, largely because of the failure of the EU’s monitoring missions in the regions.

“Frozen conflicts are not necessarily a major threat to EU stability,” she argued.

“It is the technocratic world order that is a threat to the whole world. Diplomatic efforts must be increased across the world, and finances spent on militarisation must be redirected into a global movement opposed to the concept of war itself.”

Esmira Jafarova, Board Member of the Center of Analysis of International Relations in Azerbaijan, focused her intervention on the need to implement the agreement reached in 2020 between Russia, Azerbaijan and Armenia when it comes to Karabakh.

“This agreement is very important, but unfortunately skirmishes and border clashes are the result of non-implementation of the November agreement on the part of Armenia,” she said.

She stressed that Baku wants to sign a peace treaty with Yerevan, but the latter has yet to respond.

The EU used to be inconsistent when it came to Azerbaijan and the Southern Caucasus, she explained, but after the 44-day war it started to play a constructive role, and there were meetings between the Azerbaijan leadership and European Council President Charles Michel.

“The EU has the potential to support the post-conflict rehabilitation process and the peace agenda in the region. It can play a constructive role,” she said.

“We have to condemn Russia’s activities and claim our independence from Russia, starting from the economic sphere,” concluded Giyasbayli. 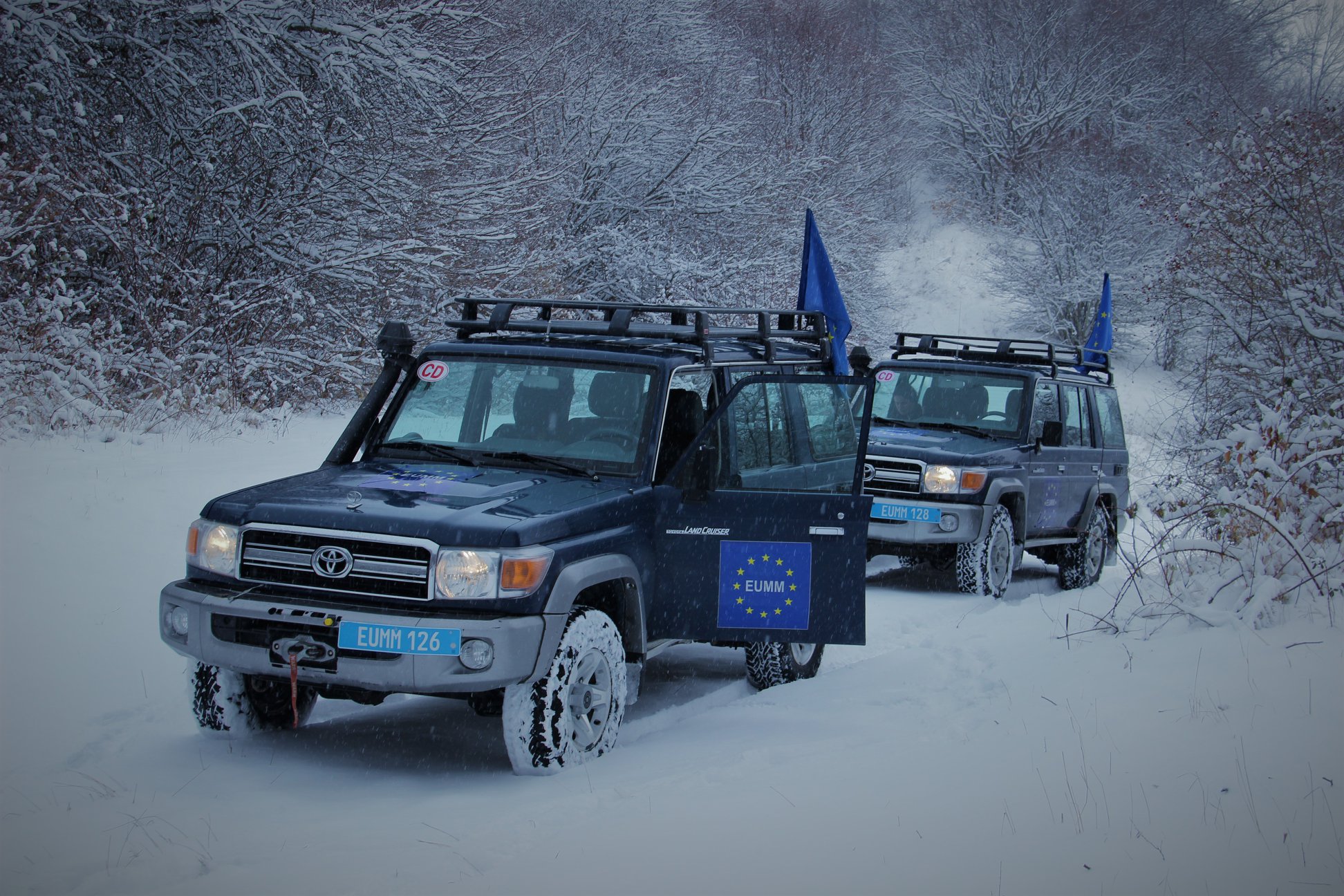 Putin’s invasion of Ukraine has demonstrated once again that peace and stability in the EU’s eastern neighbourhood are not only essential for preventing the suffering of millions of citizens but also for maintaining Europe’s geopolitical balance. The developments taking place during the last week have rightly so turned most of the EU and NATO’s attention towards Ukraine; however, we should not forget that Moscow is also involved to varying degrees and by various means in all four frozen conflicts in Europe’s eastern neighbourhood.

Often out of the spotlight, the frozen conflicts in Europe’s eastern neighbourhood – namely in Transnistria, Abkhazia, South Ossetia, Nagorno – remain a threat to the EU’s stability and security. The precarious state of internal governance and human rights in these regions hampers regional development, trade and economic growth – making their stability a further matter of international concern.

The central governments of Moldova, Georgia and Azerbaijan exercise varying levels of control over their respective conflictual regions. At the same time, all four regions have self-declared independence, albeit with differing levels of success. Crimea, on the other hand, is under the de facto control and jurisdiction of Russia. Moscow is, in fact, involved to varying degrees and by various means in all five frozen conflicts in Europe’s eastern neighbourhood. The uncertain status of these territories complicates possibilities for international support, including that of the EU, towards resolution and further dooms these areas to perpetual conflict. In this context, multi-track diplomacy, especially when based on a whole-of-society approach, offers better chances at reaching a sustainable settlement through the incorporation of different levels of society – as well as multiple stakeholders – in facilitation, mediation and peacebuilding processes.

Hamida Giyasbayli is an independent consultant, specialising in conflicts, humanitarian aid and human rights defence, who has worked in the local and international non-profit sector as a researcher and facilitator for over 10 years. Their career has focused on peacebuilding and designing safe spaces for multi-format dialogues, as well as activism in the spheres of gender, environment and LQBTQI+ issues. Currently, Giyasbayli is a Project Director at Barış Akademiyası, the first online educational platform on peace and conflict transformation in the Azerbaijani language and writes for OC Media as a freelance journalist. They have previously engaged in conflict contexts across the South Caucasus and delivered humanitarian aid during the Syrian refugee crisis.

Dr Esmira Jafarova has extensive experience in the fields of foreign affairs and international relations. She currently sits on the Board of the AIR Center, a think tank based in Baku, Azerbaijan. Jafarova is the former advisor to the Minister of Energy of the Republic of Azerbaijan on international issues, prior to which she served as the head of the the International Cooperation Department of the Ministry of Energy. She has previously held various positions within the Ministry of Foreign Affairs of the Republic of Azerbaijan, including head of the NATO/Partnership for Peace Division.

Toivo Klaar is a senior diplomat with extensive experience both at the European External Action Service (EEAS) and within the Estonian diplomatic service. Prior to his current role as the EU Special Representative for the South Caucasus and the crisis in Georgia, he served as the head of division for human resources policy and coordination, as well as for resources and planning, at the EEAS. Klaar was also the head of unit for reform and staff resources at the former European Commission Directorate-General for the External Relations (DG RELEX), which was responsible for the management of the creation of the EEAS.

Željana Zovko is a Croatian diplomat and politician, who currently serves as a Member of the European Parliament. Zovko is the Vice-President of the European People’s Party (EPP) and the party’s Vice-Coordinator for Foreign Affairs. She is Vice-Chair of the Committee on Foreign Affairs and of the Delegation for relations with Bosnia and Herzegovina and Kosovo. A Member of the Delegation for relations with the United States, she is also a Substitute Member of the Committee on Culture and Education and the Subcommittee on Security and Defence. Before her election to the European Parliament, Zovko had an extensive diplomatic career as an ambassador.