The digital single market is full of potential for Europe, but putting it in place requires painstaking work on EU regulation and laws, according to European Commission Vice-President Andrus Ansip.

“The single market was beneficial for everybody, but exists only in the physical world,” said Ansip, who is responsible for the digital single market.

“The DSM does not exist. But it could contribute €415bn a year to the economy, and will increase over the years,” he told an audience at a ‘Conversation With’ event organised by Friends of Europe.

Ansip was talking at a ‘Conversation With’ event hosted by Friends of Europe. The one-on-one discussion launched a series of events, articles and working group meetings on the 4th Industrial Revolution – the spread of automation and data exchange from consumer applications to areas such as manufacturing. One focus will be Europe’s relative lack of digitalisation compared with that of the United States, where business tends to make greater use of digital technology. America has also produced the tech giants of the past few decades, such as Microsoft, Facebook and Google.

“It’s about how to push digital Europe while remaining aware of the impact of globalisation,” said moderator Dharmendra Kanani, Director of Strategy at Friends of Europe. “If we don’t capture it, government will be left behind the curve. What are barriers in the marketplace? What can we learn from US? And what can we learn from business?”

Among the causes of the lag is Europe’s lack of a digital single market. Digital services in the US operate in a market with a population of 300 million. The EU, which has a population of half a billion and a single market in many goods and services, is largely split into national markets for media, telecoms and other digital products.

Though the Commission has long being trying to rectify this, progress has been slow. “When I was prime minister of Estonia, colleagues proposed in 2010 to create a digital single market,” Ansip said. “Everybody supported it and decided it would be digital single market in the EU by 2015.”

Tech companies face various barriers in Europe, including high taxes and a lack of programming skills. Because of these, online music streaming giant Spotify, Sweden’s best-known ‘unicorn’, has been threatening to expand operations outside its hometown of Stockholm, which is known as one of Europe’s liveliest start-up centres. 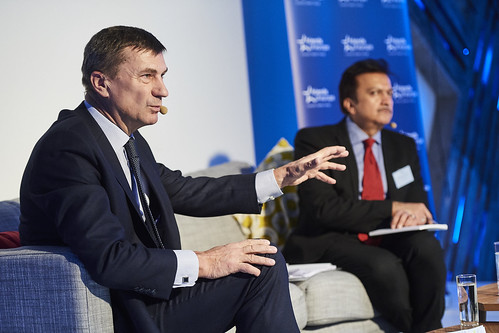 What will be the impact of the 4th Industrial Revolution?

Through a series of events, articles and working group meetings, Friends of Europe is bringing together stakeholders from both sides of the Atlantic. Their aim is to debate and propose a set of policy measures, incentives and approaches that would help Europe to be better prepared and ready to maximise the potential of the 4th Industrial Revolution – as well as provide the stimulus for greater transatlantic cooperation. Can Europe embrace the changes wrought by the 4th Industrial Revolution? How can  transatlantic cooperation help Europe compete and contribute effectively in a rapidly changing global digital landscape?

To launch this initiative, join Friends of Europe for a conversation with the European Commission Vice-President for the Digital Single Market, Andrus Ansip.

We’ll discuss the opportunities and the obstacles Europe is encountering as the 4th Industrial Revolution takes hold, with a focus on current issues such as data-sharing and privacy, in light of the Commission’s forthcoming proposal on  free-flow of data.

Often accused of slow, outdated and even obstructive regulation, the European Commission has received little in the way of praise for its embrace of the digital era. While some innovative US start-ups like Uber and Airbnb have already been free to become big global players, digital as a driver for growth largely remains a story of untapped potential, in particular in Europe. Recent research by the McKinsey Global Institute suggests that Europe operates at only 12% of its digital potential. It is clear to many that while the EU takes its time, the revolution is not only speeding along, but is accelerating.

Participants in this working group will think through the consequences and implications of the 4th Industrial Revolution to provide insights on how Europe can, in the context of its Digital Single Market objectives, seize the opportunity to become a global leader in harnessing digital innovation for growth.