In the coming decades, the African continent will face great challenges in security and development. With explosive population growth on the horizon, African leaders and their international partners have placed continental connectivity and infrastructure development high on their political and economic agendas.

“Infrastructure development cuts across various other development issues, such as health, schooling, security, manufacturing, the reduction of spatial inequality, and so on,” noted Mthuli Ncube, Chief Economist and Vice President of the African Development Bank (2010-2015), at a Friends of Europe’s Policy Insight.

The financing needs of such development are enormous, however, with the latest African Development Bank estimates suggesting that upwards of €200bn will be needed to update Africa’s infrastructure and keep up the continent’s rather resilient economic performance, noted Shada Islam, Director for Europe & Geopolitics at Friends of Europe.

“There is a financing gap of €100bn to meet Africa’s infrastructure needs,” she added. “This money needs to be found in the next ten or twenty years.”

Through a combination of official development assistance, foreign direct investment, and private-public partnerships, the money needed to close the financing gap can be made available. However, the greater issue is coordination between the different government and financing agencies.

“In every African country, there are various projects underway but there is not enough coordination between financing agencies,” noted Francesca Di Mauro, Head of Unit for Central Africa at the European Commission Directorate General for International Cooperation and Development. “This coordination needs to come from the different ministries involved.”

Hiroyuki Hino, Visiting Professor at the University of Cape Town Poverty and Inequality Initiative, drawing on the Japanese Ministry of International Trade and Industry’s post-war experience in reconstruction, stressed the value of partnerships in the public sector.

“Without a long-term perspective, it is difficult for the private sector to invest and grow. Asking the private sector to assume all the risk in developing any major project or industry is difficult and expensive. There is a proper role for public sector stakeholders to reduce this risk and make it easier to adopt long-term perspectives,” he said.

The willingness of national governments in Africa and their international partners to achieve infrastructure projects for local populations is the most important element of success, noted Alaa Alessa, Managing Director of Endeavor Energy. “We’ve seen that projects that are initiated by the government and supported by the private sector as facilitators are the most successful,” she said. “Getting everyone around the same table means stakeholder management and making sure all parties work together to achieve a project.”

The Policy Insight was followed by a dinner debate in which the discussion shifted to peace and security, which underpin the debate on development in Africa. Participants agreed that common values that Japan and the EU share – human dignity, rights, and security – allow for opportunities to focus more on governance issues. 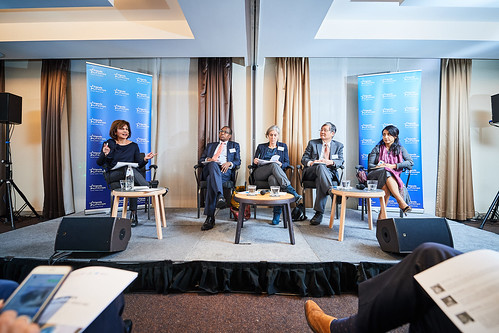 Europe, Japan and Africa: Cooperation for development, peace and stability
Start playback
About

The EU-Japan Summit held in July 2017 promised that the two partners would work together for peace, prosperity and a rule-based international order. Development cooperation to help achieve Agenda 2030 and boost development in Africa are two key areas where joint actions would be immensely valuable. In this context, the Policy Insight debate and Policymakers’ dinner will look at how the EU and Japan can cooperate to boost development, peace and stability in Africa.

This event is part of our Development Policy Forum (DPF), which brings together a number of crucial development actors, including the Deutsche Gesellschaft für Internationale Zusammenarbeit (GIZ), the Agence Française de Développement (AFD), the Japan International Cooperation Agency (JICA), the European Investment Bank (EIB), the United Nations and the World Bank to contribute to the global and European conversation on development. Through its activities and publications, the DPF reflects the rapidly-changing global debate on growth and development and seeks to encourage fresh, up-to-date thinking on the multiple challenges facing the development community.

Africa’s future largely hangs on whether it can deal with its massive infrastructure deficit. The good news: digital infrastructure has made great progress, with telecommunications coverage expanding at a fast pace across both low- and middle-income countries. The bad: only 35% of the population has access to electricity, with a huge urban-rural divide. Transport infrastructure is likewise lagging with the region being the only one in the world where road density has declined over the past 20 years. But infrastructure is not just about railways, roads, electricity and internet: developing institutional infrastructure and improving the quality and efficient use of existing physical infrastructure through the right policies and programmes is as important as creating new ones. Meanwhile, social infrastructure including water supply, sanitation, sewage disposal, education and health, which are in the nature of primary services, has a direct impact on the quality of life of Africans. Both the EU and Japan recognise that massive and immediate investment in infrastructure in Africa is the only way to create the backbone needed to foster agricultural and industrial development, create jobs and promote sustainable growth; and linking up their multi-faceted development actions could bring huge benefits.

Africa is home to seven of the 10 fastest-growing economies, but also to over two thirds of the Least Developed Countries (LDCs), and half of the Fragile and Conflict-affected States (FCS) of the world. Extreme poverty, political marginalisation, poor governance and lack of access to opportunities are not only challenges that millions of Africans face, but a fertile breeding ground for threats such as civil conflicts, extreme terrorism and uncontrolled migration. Japan and the EU recognise the need to move towards a more people-centred security, with the scope of their development cooperation now going beyond promoting economic growth and including strengthening governance and resilience in fragile states in both pre-and post-conflict situations. Over the past few years, Japan and the EU have worked together closely on crisis management to improve the security in such countries as Niger, Mali and the Democratic Republic of Congo, and are continuing cooperation in anti-piracy activities off the coast of Somalia and in the Gulf of Aden. Even greater cooperation and coordination has the potential to bring about huge “peace dividends” to Africa’s fragile regions.

Senior Fellow at the Tokyo Foundation for Policy Research

Having advised on over $2bn worth of asset valuation, structuring, divestment, acquisition, development and financing portfolios worldwide, Alaa Alessa has more than 15 years of experience in finance, structuring and investment management. In her current position at Endeavor Energy, she sits on the management team of a leading power project developer and generation company in Africa. Prior to this, Alessa held positions at Exodus Energy, Kedge Capital Services and Nomura.

José Costa Pereira has a unique insight on European, Japanese and African relations, having formerly worked at the Portuguese Embassy in Tokyo as well as having led the Pan African Division at the EEAS. Alongside his over 20 years of service at the Portuguese Foreign Ministry and subsequent posts to other ministries and the European Institutions, Costa Pereira has also published several articles on EU-Africa relations including Peace and security: The head and shoulders of EU-Africa.

Based at KU Leuven’s Centre for Research on Peace and Development, Tarila Marclint Ebiede’s research interests and expertise include political violence, security, non-state armed groups, reintegration of ex-combatants and sustainable peacebuilding, with his PhD research focusing specifically on the reintegration of ex-militants in Nigeria’s Niger Delta region. Ebiede previously conducted research at the European Centre for Development Policy Management (ECDPM) on EU-Africa relations in the domain of peace and security, analysing conflicts and security issues in Cote d’Ivoire, Burkina Faso and Nigeria.

Akiko Fukushima is a leading expert in Japanese foreign policy and aid. Her previous academic roles include working as Director of Policy Studies at the National Institute for Research Advancement (NIRA), Professor at Aoyama Gakuin University, and Senior Fellow at the Japan Foundation. Fukushima has also served on Japanese government committees including Prime Minister Shinzō Abe’s Advisory Council on National Security and Defense Capabilities. She has published numerous books and chapters, including on human security, peacebuilding and Japan’s role in institution-building.

Hiroyuki Hino is well-acquainted with economic and development issues in Africa, having served as both Senior Advisor in the IMF’s Africa Department and as Chief Advisor to the Kenyan Prime Minister. Following a distinguished career at the IMF, where he reached the post of Director of the Regional Office for Asia and the Pacific, he also went on to become a Senior Advisor to the Japanese International Cooperation Agency (JICA). Now working in academia, Hino’s current research revolves around social cohesion.

Formerly working as a lawyer in Italy, Carla Montesi has acquired diverse experience in the field of EU external policy for development and cooperation both at Headquarters in Brussels and in EU Delegations in Africa, including as Director of the Directorate-General for Maritime Affairs and Fisheries, where she was responsible for fisheries conservation, control and structural actions for the Mediterranean and Black Sea. In her current role, Montesi oversees all of the European Commission’s work in West and Central Africa.

As Chief Economist of the African Development Bank, Mthuli Ncube oversaw the Economics Complex, focusing on the process of knowledge management within the Bank and with its partners. Working today as Managing Director at Quantum Global Research Lab, he oversees investment research and has developed the Africa Investment Index, a guide to investment on the continent. He holds a number of additional positions, including Chairman of the Board of the African Economic Research Consortium and member of the Global Agenda Council of the World Economic Forum on “Poverty and Economic Development”. Ncube has published a number of award-winning papers in the area of finance and economics, as well as several books including the recently published Infrastructure in Africa.