On the 3rd anniversary of the Great East Japan Earthquake, EU and Japanese representatives met to consider their growing relationship, as both sides seek stronger and more comprehensive ties. Negotiations on an EU-Japan Strategic Partnership Agreement (SPA) and a Free Trade/Economic Partnership Agreement (FTA/EPA) are expected to boost political and economic relations, liberalise trade, and ensure greater regional security. Japanese Ambassador to the EU Kojiro Shiojiri said that Japan and the EU “must lead by example” in promoting democracy and robust ‘soft-power’ policies. The area of disaster management and relief was highlighted as one area where the two can work even more closely together. European Commissioner for International Cooperation, Humanitarian Aid and Crisis Response Kristalina Georgieva said the EU can learn from Japan on “how to engage with society to create mindset for preparedness” – and praised the resilience of the Japanese people when they were faced with the devastating earthquake and subsequent nuclear meltdown at Fukushima. 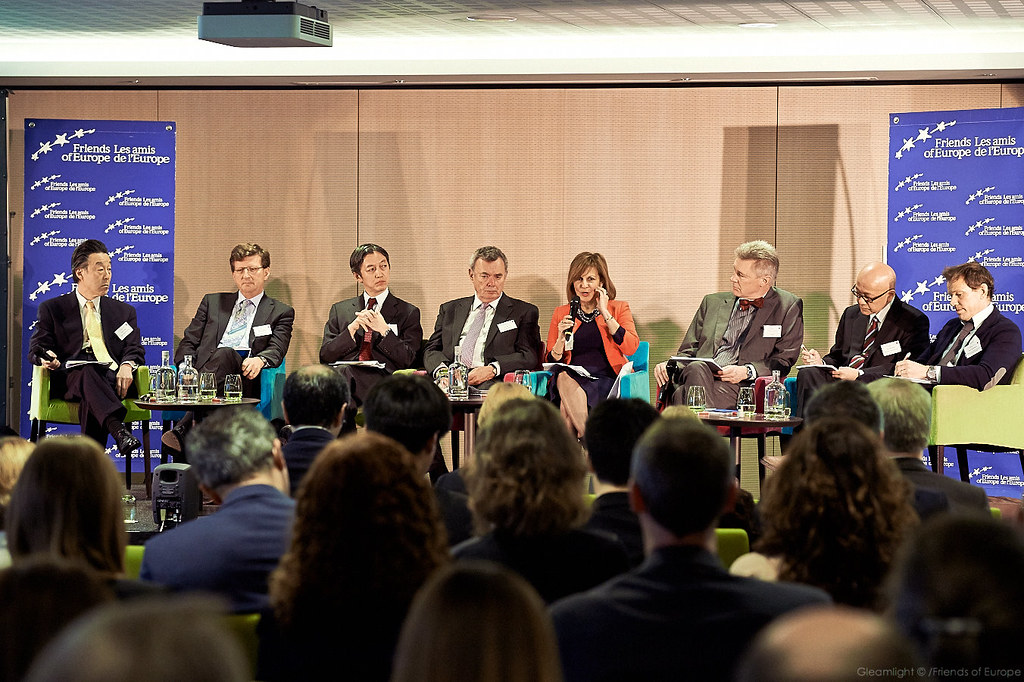 Ambassador of Japan to the EU

Relations between the European Union (EU) and Japan have grown steadily over the years as both sides seek stronger and more comprehensive ties. Negotiations on an EU-Japan Strategic Partnership Agreement (SPA) and a Free Trade/Economic Partnership Agreement (FTA/EPA) mark an important step forward in relations, with the two deals expected to boost political relations, enhance discussions on global and regional security challenges and bolster trade and investment ties. Do Japan and the EU have a “grand vision” for a future strategic partnership? How will the FTA/EPA help promote bilateral trade and investment flows and what does this mean for businesses in both sides? What are the main roadblocks? How can Japan and the EU strengthen cooperation in areas such as research and innovation and people to people exchanges to boost growth? Can the EU and Japan deepen their relations beyond economic areas and consider joint endeavours to tackle non-traditional security challenges capitalising on their “soft power” expertise? To what extent can Japan and the EU step up efforts to cooperate in international fora such as the UN, the WTO or the G20?

Deputy Chief of the Mission of Japan to the EU

President and Chief Executive Officer of the Sojitsu Research Institute

Director-General of the Multilateral Trade System Department at the Japanese Ministry of Economy, Trade and Industry (METI)

Japan and the EU can become important partners in implementing a “comprehensive approach” to tackle complex 21st Century political, development and security challenges and improve the delivery of global public goods. Despite their different approaches to encouraging democracy, can the EU and Japan work together to promote good governance, democracy and the rule of law? Could this be based on a “hybrid approach” in democracy assistance? Given that both emphasise the importance of building resilience in the face of internal and external shocks, how can the EU and Japan share their expertise and step up cooperation in areas such as disaster management and relief? What are the prospects for further coordination in the delivery of humanitarian aid? How can Japan and the EU intensify their bilateral development dialogue to better coordinate their contributions to the discussions on the post-2015 development agenda? What is the potential for further EU-Japan cooperation in areas such as crisis management, counter-piracy, peacekeeping to enhance human security?

Ambassador of the Republic of the Philippines to the EU

Senior Fellow at the Tokyo Foundation for Policy Research

Berkofsky is an expert on EU-Japan relations, Japanese domestic and foreign policies and, more generally, Asian politics and security. He worked as Research Associate at the German Institute for Japanese Studies and as freelance journalist for the Asahi Evening News and Daily Yomiuri Shimbun in Tokyo.

Okuyama pursued a diplomatic career at the Japanese Ministry of Foreign Affairs (MOFA), where he worked in the Southeast Asia Division as Principal Deputy Director and in the Multilateral Cooperation Division as Director. He held several positions overseas, including the United Kingdom, Iran, the US and the Philippines.

Mauro Petriccione worked extensively on EU trade policy before joining the Directorate-General for Climate Action, covering a wide range of activities and negotiations, from trade and standards, to defence, investment, competition and dispute settlement, as well as relations with member states and European institutions. He was the deputy director-general for trade, responsible for trade relations with Asia, Latin America and countries of Africa, the Caribbean and the Pacific. Petriccione also served as chief negotiator for the EU-Canada Comprehensive Economic and Trade Agreement, the EU-Vietnam Free Trade Agreement and the EU-Japan Economic Partnership Agreement.

Sabathil is Guest Professor at the Economic University of Prague and at the College of Europe in Bruges. He was previously Director of Foreign Policy Strategy and Coordination for the former Directorate General for External Relations.

Tada is Director of the Japan Institute of International Affairs (JIIR) and a well-known opinion maker in Washigton, where he has worked for 12 years as General Manager of Sojitz Corporation of America. He was Chairman of the Japan Business Federation and of the Committee on Americas-Japan Relations at the Japan Association of Corporate Executives.

Tanaka has been involved in the EU-Japan negotiations on a Free Trade Agreement (FTA), particularly within the Economic Partnership Division of METI. He held several positions at the Japanese Ministry of International Trade and Industry (MITI), including director of Trade Policy and WTO Affairs. He was also seconded to the Japan Machinery Center for Trade and Investment in Brussels.

Bataclan has a long-standing career in the Philippino diplomatic service. She has been Ambassador to several European countries and to Hong Kong. The Philippines have gained extensive experience in disaster management, in particular after super Typhoon Hayian hit the country November 2013.

Akiko Fukushima is a leading expert in Japanese foreign policy and aid. Her previous academic roles include working as Director of Policy Studies at the National Institute for Research Advancement (NIRA), Professor at Aoyama Gakuin University, and Senior Fellow at the Japan Foundation. Fukushima has also served on Japanese government committees including Prime Minister Shinzō Abe’s Advisory Council on National Security and Defense Capabilities. She has published numerous books and chapters, including on human security, peacebuilding and Japan’s role in institution-building.

Hashimoto started his career as a journalist, covering the movements for independence of the Baltic countries and Georgia, the Gulf War and the collapse of the Soviet Union. He is an expert in Balkans issues, having worked at the Japanese Embassy in Austria as a special assistant for Balkans, and at the Office of the High Representative in Sarajevo as a political adviser.

Patrick Simonnet is Deputy Head of Unit for International Development Dialogue, which tackles development issues within several international frameworks. He has engaged with Japan in a development policy dialogue in order to forge synergies based on shared values.

Söderberg is an expert on Japanese foreign policy and development aid. She is also Senior Editor at Routledge (London), which publishes international book series on East Asian Economics and Business. She worked as foreign correspondent in Tokyo for the Swedish newspaper Svenska Dagbladet.