Faced with the twin challenges of an increasingly isolationist US and a more globalist China, participants at the 26 February Friends of Europe dinner debate “EU-ASEAN relations: separating fact from fiction” agreed on the need to step up EU-ASEAN trade and investment, and, more importantly, to join forces to defend the rules-based global order and institutions, including the World Trade Organization and the United Nations.

Participants discussed ways to boost security cooperation, fight climate change, and collaborate more on science and technology as well as cyberspace.  There was concern about the human rights situation in several ASEAN countries as well as the rise of populism in some countries in both ASEAN and the EU.

During the debate, participants also acknowledged the need to overcome fundamental differences in perception between the two regional organisations, with the EU overestimating the level of integration in ASEAN, and ASEAN viewing the EU as little more than an economic alliance. However, if both sides can escape from what some participants called the donor-recipient relationship, there is also potential to develop policy dialogue in specific areas, including fisheries, social protection and public transport. 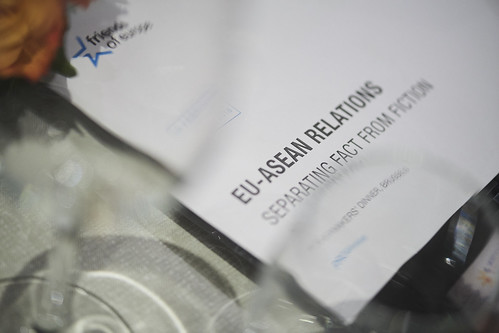 ASEAN and the European Union have come a long way since they established diplomatic relations forty years ago. Having celebrated its 50th anniversary in 2017, ASEAN is embarking on a new chapter in its journey towards deeper regional cooperation and integration. The 60th anniversary of the signing of the Treaty of Rome last year, on the other hand, was a bittersweet occasion as governments pledged to forge ahead as an “EU 27” following Britain’s decision to leave the Union.

The changing global landscape has resulted in both blocs being very attractive to other countries hoping to increase cooperation, including in trade, security and sustainability. This provides a unique opportunity for ASEAN and Europe to step up cooperation on areas of shared concern, including ASEAN’s 2018 priorities – such as efforts to strengthen resilience and the ability to innovate – set out by Singapore as the group’s new chair.

On the eve of the EU-ASEAN Strategic Thinkers Forum, this dinner debate will bring together around 30 senior stakeholders from both sides for a forward-looking, no-holds-barred conversation on what’s right and what’s wrong in relations between the two regions.

ASEAN and the European Union have come a long way since they established diplomatic relations forty years ago. Today, both are connected by a swathe of common concerns but are also similarly challenged by geopolitical transformations and uncertainties. Over the years, ASEAN and the EU have crafted an ambitious agenda for increased cooperation on bilateral issues and global questions. But this increased inter-action has also been marked by challenges such as differences on human rights, the EU’s phytosanitary trade standards and the evolving regional security architecture.