Huge strides have been made in developing ways to tackle rare diseases – which the European Union (EU) defines as those affecting fewer than 1 in 2,000 people – since January 2000, when the Orphan Medicines Regulation came into force. However, 95% of some 5,000 to 8,000 of these conditions still have no sufficient available treatments, panellists told a 26 June Friends of Europe ‘Café Crossfire’ lunch debate in Brussels.

“The Orphan Regulation is a great success and has done the job in terms of attracting investment,” said Yann Le Cam, Chief Executive Officer of the European Organisation for Rare Diseases (EURORDIS). “We see more diseases being covered and more medicines approved. But the overall access system is not adapted to the new science.”

“Rare diseases are still an unmet need,” agreed Rute Fernandes, Group Vice President and Head of Rare Diseases for Europe and Canada at global pharmaceutical company Takeda. She welcomed the progress of the last two decades: “We started with only eight orphan medicinal products and now more than 150 cover over 90 rare diseases.” In addition, there has been an 88% increase in research per year between 2006 and 2016 – with Europe “leading the globe” in new clinical trials.

With only 5% of rare diseases with adequate treatment options and major discrepancies in access to adequate therapy countrywide, an innovative new approach is needed to accelerate access and make use of real-world evidence, Fernandes said: “We need to improve the value of these treatments and establish early dialogue between regulators and industry to facilitate that discussion early on.”

One way to get “real research knowledge” and “access to expertise” is to use European Reference Networks (ERNs), argued Till Voigtländer, Austrian Representative of the Board of Member States of ERNs. Launched in 2017, these virtual networks of European healthcare providers encompass more than 300 hospitals and 900 specialised teams. They have shared knowledge across Europe, speeding up access to diagnosis and appropriate care.

If these ERNs are fully integrated into member states’ health systems, they will reduce diagnosis time, Martin Seychell, European Commission Deputy Director General for Health and Food Safety, told the meeting. However, achieving this goal is harder in some countries than it is in others – notably in federal states like Austria. ERNs are still at deployment stage and each has its own history and size. But they are not the only avenue to explore for rare diseases.

Getting the right data on rare diseases and using it correctly is essential. More importantly, it must not be the basis for discrimination, the meeting heard. In addition to valuable registries of patients with rare diseases, a “European clearing house” must be created to ensure that data contributes towards each patient getting access to appropriate care. A third issue is funding, panellists agreed.

Summing up, Seychell said “the next five years will be absolutely crucial” in deciding how best to utilise expertise on rare diseases. 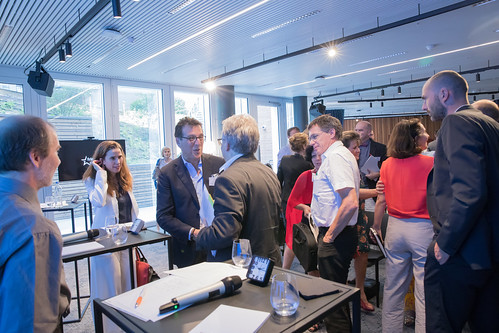 The EU has already made great progress on the treatment of rare diseases. However, persistent gaps remain. Of the 5000 to 8000 rare diseases that exist in the EU, 95% do not have an effective therapy. On top of that, about a quarter of orphan drugs fail to reach marketing authorisation. Our 2017 debate on the subject revealed that budget pressures, bureaucratic obstacles and problems of scale are preventing rare disease patients from getting the treatment they need. During this lunch debate, we want to explore how the EU can move from evidence and incentives to equal access to new medicines for patients across the different health systems in the EU.

Rare diseases are both a European success story and an area of persistent gaps. The good news: the 2000 EU Orphan Medicines Regulation has significantly improved the drug development pipeline, resulting in over 150 new medicines authorised on the market. With an estimate of 5000 to 8000 distinct rare diseases existing in the EU, 95% still do not have the available therapy, and a large percentage of orphan drugs fails to reach marketing authorisation. Gaps still persist in knowledge and treatments, frequently with an overlap because rare diseases often occur in children.
The European Commission will soon adopt a joint evaluation of existing legislation on medicine for children and rare diseases, taking a two-pronged approach. First and foremost, the Commission intends to assess the efficiency of EU legislation by analysing the impact that pharmaceutical incentives have on innovation. Secondly, it plans to gauge the availability and accessibility of medicines in the EU. Building on the foundations set out by the last four EU mandates on health, the priority now is to determine an effective strategy for translating EU incentives, knowledge and networks into better access to treatment for rare disease patients.

Rute Fernandes is a member of the Europe and Canada Executive Team of Takeda, the patient-focused, values-based and Research and Development-driven global biopharmaceutical company. In her current role, Fernandes leads the Rare Disease Franchise covering 3 disease areas in Rare Metabolic Disorders, Rare Hematology and Rare Immunology, across 38 countries. Previously, Fernandes held senior executive roles at Shire as General Manager Switzerland, Head of Global Commercial Operations, Head of Patient Services and Commercial Excellence for International. Over the years, she has also worked for Novartis, Procter and Gamble and Vodafone, building on her extensive experience in strategy, finance, commercial development and industry.

A Founder of EURORDIS-Rare Diseases Europe, Yann Le Cam has served as the organisation’s CEO for over two decades. He also initiated the global alliance of persons living with a rare disease, Rare Diseases International (RDI), where he sits on the RDI Council and chairs the RDI Advocacy Committee. Notably, Le Cam is a Founding Member and Vice-Chair of the NGO Committee for Rare Diseases. He also serves as the Co-Chair of the Global Commission to End the Diagnostic Odyssey for Children with a Rare Disease and as a Member of the World Economic Forum’s Health Stewards Board and Global Precision Medicine Council.

Till Voigtländer is the Austrian Representative to the Board of Member States of the European Reference Networks – virtual networks of European healthcare providers that aim to facilitate discussion on rare diseases. In his home country of Austria, he heads the National Coordination Centre for Rare Diseases and was in charge of drawing up the National Action Plan for Rare Diseases. Voigtländer has also been the Austrian Coordinator for Orphanet, a reference database for rare diseases, since 2004. In addition to that, he is Associate Professor at the Medical University of Vienna.