The EU has doubled down on its calls for China to further open its markets to foreign companies. At Friends of Europe’s 20 March EU-China Policy & Practice Roundtable “Can cooperation trump competition?” a senior EU official appealed to China to wrap up long-running talks on a Comprehensive Agreement on Investment by 2020 “at the latest” and spoke of growing “impatience” in Brussels over a stalled aviation safety deal.

“It is this kind of lack of progress, stalling, which creates a certain degree of impatience and frustration on the European side,” said Gunnar Wiegand, Managing Director for Asia and the Pacific at the European External Action Service (EEAS). “Take these signals seriously: they are real,” he added. “As much as we very firmly believe in good relations and close partnership, we believe in fair partnership and mutual opening because our internal market is wide open for Chinese operators.”

However, China’s ambassador to the EU said “full reciprocity” between the Chinese and EU economies was still “far-fetched” given that China still trails Europe in terms of per capita GDP, industrialisation and poverty levels. “It’s not helpful to play up differences, point fingers at each other and turn up pressure by issuing ultimatums,” said Zhang Ming, Ambassador of the Mission of the People’s Republic of China to the EU. “It does not make sense to force blanket reciprocity,” he added.

Zhang also disagreed with the EU’s labelling of China as a “systemic rival” (in a recent Commission communication) and said competition between the two economies is “not a bad thing”. And he appealed for the EU to ignore recent “groundless accusations” of espionage against Chinese technology giant Huawei.

The debate – which was followed by a roundtable discussion among participants – took place one day ahead of an EU leaders’ summit in Brussels, where EU-China relations were on the agenda, and just over two weeks before the 21st EU-China Summit, the last within the current European Commission mandate. 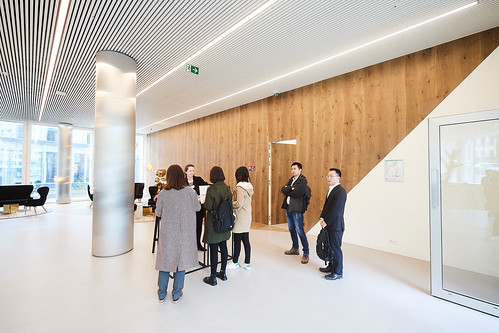 Ahead of the 21st official EU-China Summit planned for April 2019, this by-invitation-only policy and practice roundtable debate will bring together around 40 senior European and Chinese stakeholders from the EU institutions, governments and the private sector for a forward-looking conversation on what to expect from the Summit, as well as the state of relations between the EU and China. The discussion will be interactive and focused on ways to take EU-China relations to a higher level.

The 21st EU-China Summit to be held in April takes place amid continuing global disruption and uncertainty as countries adjust to shifting power dynamics and face new challenges. This session will set the scene for the upcoming summit and will be followed by Q&A.

At their summit in June last year, Brussels and Beijing agreed to jointly address climate change, tackle common security threats, promote a rules-based multilateral order and maintain open and fair trade. Accords were signed on a range of issues, including ocean governance, emissions trading and the circular economy. Both sides made progress in negotiations on a bilateral investment agreement by exchanging market access offers. Turning words into action remains difficult, however. China has responded to some EU demands for a further opening up of its market but European business wants reciprocity and says more must be done. There is unease in Beijing about Europe’s new investment screening mechanism which some fear could be used to keep out Chinese firms. And as China prepares for a second Belt and Road Forum, there is still scant sign of real synergies between China’s ambitious blueprint and the EU’s strategy for enhancing Euro-Asian connectivity. As such, what is to be expected at the upcoming EU-China Summit?

• Are the EU and China walking the talk on join action to reform the World Trade Organization?
• What is the state of play on negotiations of a bilateral investment agreement and will such an accord ease both sides’ concerns over market access?
• Has China taken any steps to multilateralise the BRI and taken on board some of the EU’s comments on sustainability, transparency and accountability?

Zhang Ming has had a long and distinguished career in the diplomatic service, specialising in West Asian and North African affairs. Starting his career by working in Chinese embassies in Yemen, Oman and Israel, he later became Ambassador Extraordinary and Plenipotentiary to Kenya, Permanent Representative to the United Nations Environment Programme (UNEP) and Permanent Representative to UN-Habitat. Prior to his appointment to Ambassador of the Chinese Mission to the EU, Zhang served as Vice Minister at the Ministry of Foreign Affairs.

With more than twenty years’ experience in the EU’s external relations and trade policy, Gunnar Wiegand has previously served as Spokesman for External Relations to Commissioner Chris Patten; Head of Unit for Relations with the United States and Canada at the European Commission’s External Relations Directorate-General; and Deputy Managing Director for Europe and Central Asia at the EEAS, during which time he was the EU’s Chief Negotiator for the Association Agreements with Moldova, Georgia and Armenia, as well as the Enhanced Partnership and Cooperation Agreement with Kazakhstan. In his current role, Wiegand is the EU’s Chief Negotiator for the new EU-Japan Strategic Partnership Agreement.

Shada Islam is responsible for policy oversight of Friends of Europe’s initiatives, activities and publications. She has special responsibility for issues related to the Future of Europe, Migration, the Asia Programme and the Development Policy Forum. Shada is Visiting Professor at the College of Europe (Natolin) where she teaches Asia-Europe relations and has been selected as a fellow by the Vrije Universiteit Brussel (VUB). She has been named as one of twenty most influential women in Brussels by Politico. Shada is the former Europe correspondent for the Far Eastern Economic Review and has previously worked on Asian and Migration issues at the European Policy Centre. She is one of the authors of Friends of Europe’s much-read “Frankly Speaking” commentary and is sought after as a speaker, commentator, columnist and moderator at high-level European and global events. Shada also continues to write on EU foreign and security policy, EU-Asia relations and trade and development issues for leading Asian, European and international publications and academic journals.