The COVID-19 crisis will inevitably reshape politics and economics as we know it. This pandemic has shown us that “our social market economy has to become a bit more social and a bit less capitalistic” according to Pascal Lamy, former WTO director-general and EU Commissioner for trade. Joined by Mario Monti, former Italian prime minister and EU commissioner for competition, the two experts debated why they support the call for coronabonds, what a Europe post-COVID-19 will need and the urgency to restructure the outdated Multiannual Financial Framework (MFF).

They also discussed the need for real leadership to swap over from the national level to Brussels in these times of crisis. Monti elaborated on this, making it clear that “to let the European Union proceed and approach our dreams, we need leaders that are ready to sacrifice domestic popularity and re-election”. He also argued that the European Council is “really a place of destruction and distraction”.

Monti and Lamy then debated the role of advocacy. The former argued for persuasion, highlighting the need to bring reluctant member states on board by convincing their domestic public opinion. Lamy, on the other hand, called for certain Eurogroup policies to move forward without the involvement of opponents such as Germany.

In the end, both favoured the idea of coronabonds to tackle the large economic repercussions of the pandemic. Not least because “only a strong, joint EU operation can reach the ‘financial bazooka’ of €1.5 trillion needed for the recovery” according to Lamy. COVID-19 has also exposed how important it will be to continue to focus on a more green and digital future for Europe. Both the Green Deal and the Digital Strategy “need to acquire more plausibility and clout” for which a stronger MFF is needed 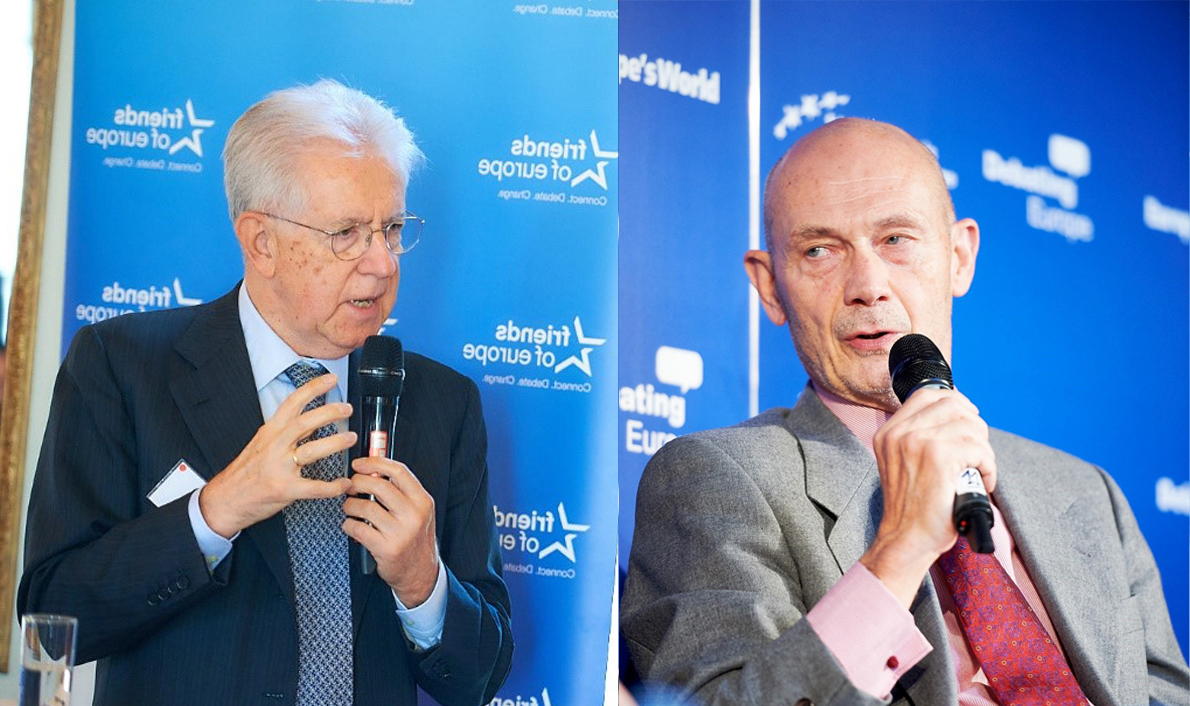 This Online Policy insight provides an opportunity to engage with leading personalities from the world of politics on European issues that matter to citizens. It will feature interactive interview-style discussions with our multi-stakeholder audience and our community of diverse members drawn from the private, public and civil society sectors.

What lessons can the current college of Commissioners learn from two leaders with long-standing experience matured through many EU crises? Both Mario Monti and Pascal Lamy have thorough understanding of EU policymaking, having repeatedly developed concrete ideas for action, as well as being directly involved in managing crises. They will try to answer some of the most pressing questions in a heated time where several members states have lamented the lack of empathy and sharing of resources. With the ongoing struggle to agree on essential financial mechanisms and bailout funding, European Executive Vice-President Vestager told us last week that the recovery from the current crises must be green and digital.

Mario and Pascal will answer the below and your questions:

Italian Senator for life, Chair of the World Health Organization’s (WHO) Pan-European Commission on Health and Sustainable Development, former prime minister, former European commissioner and Trustee of Friends of Europe

Pascal is a French politician and author. As a Member of the French Socialist party, he was Chief of Staff for the President of the European Commission, Jacques Delors. Afterwards, he returned to Brussels to become the European Trade Commissioner and then served for two consecutive terms as General Director of the World Trade Organisation (WTO). In a 2014 poll cast by the British magazine Prospect, he was named as one of the world’s top 50 leading thinkers.

In his new role as chair of the newly-formed WHO Europe Commission, Mario Monti spearheads attempts to rethink health policy priorities in light of the COVID-19 pandemic. A distinguished economist, Mario has cemented his reputation as a committed supporter of the single currency and a talented negotiator leading a government of technocrats in the wake of the Italian debt crisis in late 2011. He chaired the High-Level Group on Own Resources, a consultative committee of the European Union, aimed at proposing new forms of revenue for the European Union’s budget, which resulted in the final report “Future Financing of the EU” arguing for new tax sources.

Read more about "Climate change and the spectre of ‘hydraulic civilisation’"

Read more about "What does the UK’s Integrated Review of Security, Defence, Development and Foreign Policy mean for Euro-Atlantic cooperation?"

Read more about "Has Europe lost the fight for truth?"