The European Young Leaders’ Barcelona seminar has come to a close. For three days, the EYL40 discussed and debated Europe’s most pressing issues, from the climate emergency to tackling inequalities. Here’s a taste of the incredible and, as always, insightful seminar. 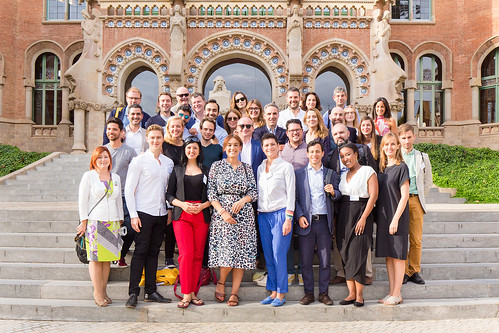 BRAND EUROPE: THE GOOD, THE BAD AND THE UGLY

The seminar kicked off with a discussion around lessons from history and the 5-year forecast for Europe.

Ryan Heath, Senior Political Editor at POLITICO: “People aren’t killing each other anymore, so people should be f***king grateful.”

So, what’s the issue and how has communication around the EU failed?

Stephan Petermann, architect and Co-Founder of Eurolab, spoke to EYLs about the importance of better branding for the European project – and why design thinking is the way to go. Another tip? Stop being on the defensive: “You cannot submit to pessimism, you always have to be progressive. You cannot get away with sitting back and letting things go,” he added.

Sure, tax talk bores most of us, but here’s the truth according to Friends of Europe’s Dharmendra Kanani, who moderated the seminar: “Social mobility is increasingly difficult and one of the tools that’s being most poorly used is taxation.”

WHAT’S IN A NAME?

Lera Boroditsky, cognitive scientist at the University of California San Diego spoke on how different languages can affect their speakers’ way of thinking and how politicians can use language to manipulate and mobilise opinion.

Populist politicians, for example can use metaphors on immigration to trigger images and ideas in voters’ minds. “A lot of ideas can sneak in through metaphors, because they already exist in people’s minds and the metaphors just bring them out,” she said. “That’s a very dangerous thing.”

WORDS MATTER, BUT SO DO TRUST AND CONNECTION

“The gap between citizens and the elite is filled with right-wing extremists, and their success is our weakness,” said panellist Edward Strasser, Co-Founder and CEO at the Austrian Innovation in Politics Institute. “The democratic spectrum has to be improved to ensure that our kids don’t live in an authoritarian environment.”

Participants focused on the need for improved relations between politicians and voters, as well as for European institutions to provide better responses to citizens’ concerns. “If we manage to make the next five years of the European legislation the years of sustainability – climate and environmental sustainability, and human and social sustainability – we will reconnect the continent,” said Cristina Gallach, High Commissioner for the UN’s 2030 Agenda of Spain. “This is the critical vision that will end well.”

Gallach was not the only one to highlight climate as one of the biggest issues that needs to be addressed at European level. According to European Young Leader Xavier Damman, there is simply nothing more important than tackling the climate emergency. Ryan Heath, when asked what he viewed as the biggest challenge facing Europe, also agreed.

All in all, what was clear throughout the discussion, and the seminar as a whole, was the crucial need for a new type of leadership in Europe – one that is innovative and focused on inclusivity, communication, and equality.

“The EU isn’t going to save you. The EU is you” – Ryan Heath, Senior Political Editor at Politico

“This is a new movement of people that are looking at social innovation…If you think about the future of Europe, social innovation can have a very important role” – Markus Freiburg, European Young Leader, and CEO and Co-Founder of the Financing Agency for Social Entrepreneurship (FASE)

“We have to find a balance between speaking with our heart, connecting with people and having rational reasons for our decisions” – Inés Arrimadas García, European Young Leader and Leader of the Opposition in the Catalan Parliament

“Silos lead to ‘identitarianism’ and exclusion. You end up not being able to communicate with and understand others” – Ana Palacio, former Minister of Foreign Affairs for Spain and former Senior Vice-President and General Counsel of the World Bank

“Are the EU institutions equipped to create messages for all Europeans when there is such lack of diversity within them?” – Jamila Aanzi, European Young Leader, Business Economist and UN Women’s Representative (2017)

“The Nordic countries are often mentioned as an example for other countries. Economics are good but there is racism, sexism and other problems to be tackled.” – Ozan Yanar, European Young Leader and former Member of the National Parliament of Finland