As part of its Balkan Journey, Friends of Europe’s Working Group on women’s economic empowerment in the Western Balkans held its inaugural meeting on 8 April 2022 in Tirana, the capital of Albania, to set its agenda and main focal points for the next two years. The first round of discussions was hosted by the municipality of Tirana, with opening remarks by Mayor Erion Veliaj.

In the kick-off meeting, high-level personalities and experts provided their insights on the main obstacles hindering women from thriving economically in the region. “Currently, there are more women in power in the history of the Balkan region, but the gap between men and women is getting larger. Why is that the case?” asked Dharmendra Kanani, Director of Asia, Peace, Security & Defense and Digital & Chief Spokesperson at Friends of Europe, to initiate the debate.

The main reasons highlighted by members of the Working Group for the increasing gender gap in the Western Balkans included: an education system based on gender roles from a very young age, which often leads to gender-based discrimination and violence; the unsustainability of projects aimed at improving the active participation of women in public life and the labour market, due to changes in funding priorities; and the lack of data to provide a more precise picture of the situation.

The Working Group emphasised that “women are not a homogenous group”. However, mainly due to the lack of data and socially imposed gender roles, policies are made based on general assumptions, and this may contribute to the widening gender gap. Several members elaborated on a low level of men taking paternity leave, explaining that further legal obligations for equal parental leave to be taken by both parents would facilitate women’s return to the labour market after giving birth. In addition, a lack of information on human rights exists among women in the Western Balkans, especially in poorer parts of the societies. The Working Group explained cases of women giving up their property rights to men due to customary laws that exempt female family members from having any claims on property.

The members of the Working Group agreed that women from rural areas are mainly engaged in unpaid labour and suffer various human rights violations, especially women who are employed in agriculture. Women who do not have access to infrastructure, and thus access to assets and services, also find themselves facing difficulties in thriving economically. Some members defined assets as having access to land, financial services, education and mentorship, technology and information; whereas services mainly include access to the care economy, including facilities that assist in the daily care of children and the elderly during working hours, so women may engage in paid labour outside of the household.

By the end of the three discussion rounds, the Working Group came up with several main areas of focus for the two-year agenda, including: access to labour infrastructure and services to regulate a work-life balance; women in rural areas and agriculture; and gender-responsive budgeting, among others. The Working Group agreed that emphasis in these particular fields would facilitate the process of elaborating on the obstacles that women face in the Western Balkans, hence easing the way to come up with tangible recommendations for future policies.

The first meeting of this Working Group, envisaged as a kick-off discussion round, involved over 30 experts, including national and local government representatives from the Western Balkans, European and international institutions, civil society, academia and the private sector. 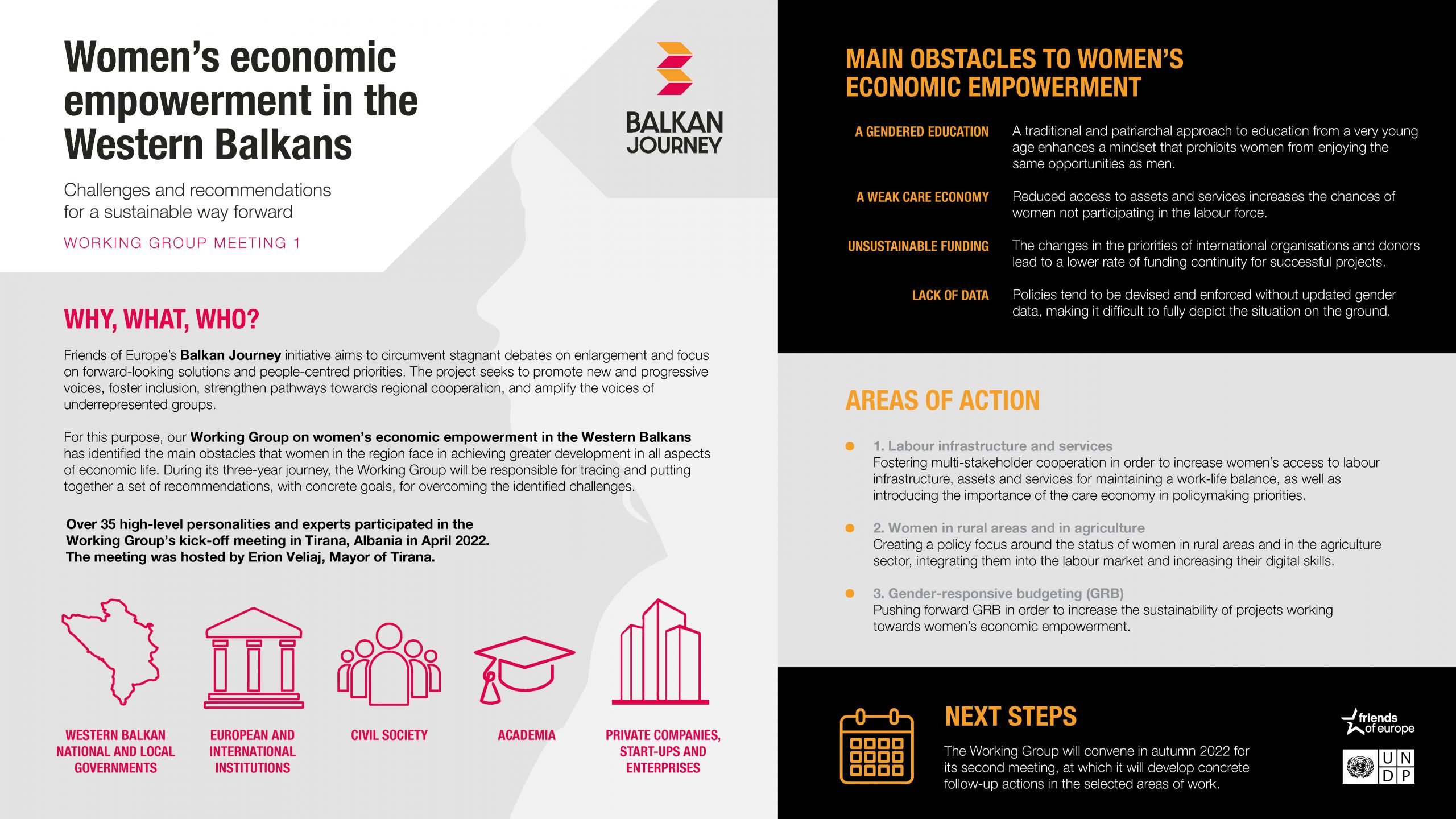 Creating new opportunities for women in the regional labour market is crucial for sustainable economic development in the Western Balkans. This is more important than ever given the economic impact of the COVID-19 pandemic and the long road ahead to social and economic recovery.

As part of its Balkan Journey, Friends of Europe’s new Working Group aims to identify the challenges to women achieving greater economic empowerment in the Western Balkans, as well as recommendations for overcoming them. The Working Group is carried out in partnership with the United Nations Development Programme (UNDP).

The first meeting of this Working Group, envisaged as a kick-off discussion round, will involve around 30-40 experts, including national and local government representatives from the Western Balkans, European and international institutions, civil society, academia, and the private sector. It will be held in Tirana, Albania.

* For the United Nations Development Programme, references to Kosovo in this document accordingly shall be understood to be in the context of Security Council resolution 1244 (1999). For the European Union, this designation used is without prejudice to positions on status, and is in line with UN Security Council resolution 1244/99 and the International Court of Justice Opinion on the Kosovo declaration of independence.

Executive Director of the Gender Alliance for Development Center

Mayor of the City of Skopje

Former Albanian Deputy Minister of Justice, Professor of EU Law at the University of Tirana and 2020-2021 European Young Leader (EYL40)

Adjunct Lecturer at the Rochester Institute of Technology Kosovo*

Head of the City Council of the Municipality of Tetovo

Programme Coordinator of the Genesis Project

Director of Legal and External Affairs at Vodafone Albania

President of the Foundation BFPE for a Responsible Society (BFPE)

Head of Office Western Balkans at the Kvinna till Kvinna Foundation

Executive Director of the Centre for Economic and Rural Development (CERD)

Executive Director at Foundation BFPE for a Responsible Society (BFPE)

Danela Arsovska is the Mayor of Skopje. Additionally, she serves as the President of the Macedonian Chambers of Commerce, the union of national chambers of commerce, and Chair of the Macedonian Union of Employers’ Organizations. Arsovska is also a Representative in the parliament’s National Council for European Integration. She is an Appointed Member at the Organization for Security and Co-operation in Europe (OSCE) Court of Conciliation and Arbitration in Geneva and has previously served on the Panel of the International Centre for Settlement of Investment Disputes (ICSID) at the World Bank Group in Washington.

Fjoralba is the former Albanian minister for justice covering European integration and anti-corruption policies. Having started her career as an academic teaching EU Law, she has maintained an ongoing cooperation with civil society organisations. She also served as a lawyer on issues related to strategic litigation and offered legal aid for people in need and for marginalised communities. In addition, she has led projects focusing on youth and national anti-corruption campaigns, including “Fighting Corruption in the Higher Education System” and “Bookworm Project – outdoors mini-library”.