It has been nearly twenty years since the adoption of the United Nations Security Council resolution SCR1325 on ‘Women, Peace and Security’ that encoded women’s roles in peace and security. In spite of this and against growing evidence that including women in peace-making processes in conflict areas enhances peace and stability, women still struggle to get a place at the negotiating table.

“There is a huge gap between what the UN resolutions and international commitments outline and what is put into place by governments throughout the world,” noted moderator Shada Islam, Director of Europe & Geopolitics at Friends of Europe, at the debate entitled ‘Women, Peace and Security’ on 7 March. “It is really a sad story to tell.”

According to a Friends of Europe’s publication on the subject, in global peace processes between 1992 and 2011, women made up only 2% of chief mediators, 4% of witnesses and signatories, and 9% of negotiators. In addition, from 2008 to 2012, women were signatories to only 2 of 61 peace agreements.

Though the international community has declared otherwise, the reality is that the vast majority of peace agreements over the past thirty years fail to include women in the peace process or even address them and their concerns, including gender-based violence.

“There is not enough research in this area but where there is, there is a proven difference as a result of involving women in peace negotiations,” stressed Clare Moody, European Parliament Vice-Chair of the Subcommittee on Security and Defence.

“When women are actively involved in the peace-making process, there is a 20% increase in peace lasting two years and a 35% increase over five years,” she said.

Increasing the participation of women in such processes requires concerted efforts to empower them but this alone is not sufficient, noted Sandra Oelke, Advisor on Security, Peace and Disaster Risk Management at the Deutsche Gesellschaft für Internationale Zusammenarbeit (GIZ).

“We need to empower women but also to raise awareness among men and the male-dominated organisational culture in peace and security,” she said. “Without respect and acceptance on their side, women are simply unable to get into the field.” 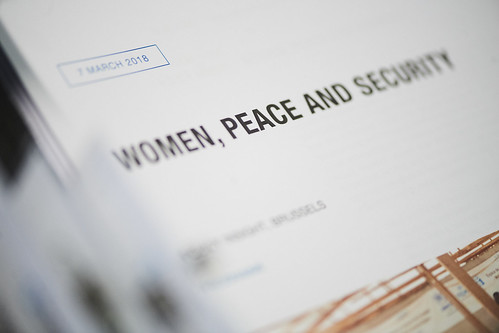 This event is part of our Development Policy Forum (DPF), which brings together a number of important development actors, including the Deutsche Gesellschaft für Internationale Zusammenarbeit (GIZ), the Agence Française de Développement (AFD), the Japan International Cooperation Agency (JICA), the European Investment Bank (EIB), the United Nations and the World Bank. Reflecting the growing role of the private sector in development, the DPF has now welcomed Coca-Cola to the forum. The DPF contributes to the global and European conversation on inclusive development. Through its activities and publications, the DPF reflects the rapidly-changing global debate on growth and development and seeks to encourage a multi-stakeholder, fresh, up-to-date thinking on the multiple challenges facing the development community.

National and international peace talks routinely exclude women despite their key role in peace-building and ensuring sustained stability. Despite stereotypical images of women as passive victims of war, women are largely active in the informal spheres, at community and civil society levels, beneath the radar of the international community and the traditional peace and security framework. Although traditional efforts by governments and nongovernmental organisations to combat radicalisation typically focus on reaching out to political or religious leaders—who are predominantly male—recent research shows that antiterrorism messages are effectively disseminated throughout families and communities by women, who are well placed to challenge extremist narratives in homes, schools, and social environments, and have particular influence among young populations.

Head of Monitoring and Evaluation at AVSI Foundation, South Sudan

Senior Advisor on Gender and Development at JICA Tokyo

European Parliament Vice-Chair of the Subcommittee on Security and Defence; and rapporteur on “EU fund for gender equality”

In conflict-torn South Sudan, Bruno Nazim Baroni spearheads the monitoring of AVSI Foundation’s projects on women and security, supporting local peace committees and gender-based violence prevention. He also leads the crafting and realization of socio-economic research, encouraging vulnerable women to engage in agriculture in partnership with community leaders’ families as a means to increase female economic weight and voice. Throughout his career as an evaluator, Baroni has supported government agencies and multilateral organisations to gear initiatives of local economic development toward the needs, and in line with the constraints and opportunities, of vulnerable women and adolescents.

Makiko Kubota provides advisory and technical support to JICA operations on gender equality and women’s empowerment. She has been engaged in various field projects in Asia, Africa and Central America to address sexual and gender based violence, social protection, women’s economic empowerment, and political participation and leadership. Prior to this position, she served as a policy advisor for the Ministry of Women’s Affairs in Afghanistan focusing on building the ministry’s capacity to promote gender responsive reconstruction and peacebuilding processes. Kubota is also a member of the evaluation committee for Japan’s National Action Plan on the UN Security Council Resolution 1325 on Women, Peace and Security.

Parallel to her leading position within the European Parliament, Clare Moody sits on the Committee on Foreign Affairs and the Committee on Women’s Rights and Gender Equality. Her work within all of these committees has focussed on the wide variety of issues facing women and security, including addressing the gender pay gap; women’s health and education; and supporting gender mainstreaming in the EU budget through her 2017 report on “EU funds for Gender Equality”. Moody has extensive political experience, including working as an advisor to Former Prime Minister Gordon Brown at No 10.

As an advisor on security, Sandra Oelke was recently at the forefront of the implementation of the German strategy “Development for Peace and Security”. Previously, Oelke was a Planning Officer at the Security Sector Reform where she was responsible for a plethora of areas such as project planning and advising in the fields of Security Policy; Stabilization; Preventive Violent Extremism and Small Arms Control. In addition, Oelke was programme manager at East African Standby Coordination Mechanism (EASFCOM), where she was involved in the steering and standardization of training activities in the field of Conflict Prevention and Gender.