The unwelcome truth that ‘Social Europe’ has been slipping down the EU’s policy agenda last year impelled Friends of Europe to convene a high-level yet heterogeneous group of experts under the chairmanship of former Belgian Deputy Prime Minister and Social Affairs Minister Frank Vandenbroucke to analyse the facts and propose solutions.

The final report of this working group entitled Unequal Europe: Recommendations for a more caring EU sets out to assess the strengths and the weaknesses of the social policies that have been fundamental to the creation of the European Union itself. On the basis of these findings, it recommends to the new European Commission and the EU institutions as a whole actions both to reaffirm Europe’s social principles and to address its competitiveness goals.

The wide-ranging nature of the members of the working group can be judged, though, from the inclusion of trades union leaders like Reiner Hoffmann, Head of Germany’s DGB, Philippe de Buck, who for many years ran the BusinessEurope employers’ confederation, Anna Diamantopoulou, former Greek Minister of Development and Competitiveness, Pascal Lamy, former Head of the WTO, and the then EU Social Affairs Commissioner László Andor.

The Working Group’s proposals should be read carefully, for they contain the precise wording and nuances needed to achieve members’ agreement. But the thrust of the recommendations is simple and clear – policymakers at EU and national levels must act urgently to recover lost ground in areas stretching from education to employment and job creation right across to the treatment of immigrant job-seekers, within the EU and from further afield.

The group calls on Jean-Claude Juncker’s new EU Commission to take a far broader approach to social investment. That is essential, the report argues, to avoiding long-term burdens on economic growth. It sees a need for greater investment in caring arrangements for the deprived and under-privileged, and in education and training to ensure equal opportunities for all.

In short, a return to the solidarity that was such a feature of European integration from the days of the Rome treaty to the EU’s ‘big bang’ enlargement of 2004 and thereafter. Inter-generational solidarity and a renewed sense of social cohesion and cohesion between richer and poorer member states are twin concerns.

The message of the report, against the background of unacceptably high unemployment in so many EU countries, particularly of young people, is that human investment must be given equal priority with investment in infrastructure, innovation and all the other areas seen as crucial to Europe’s global competitiveness. 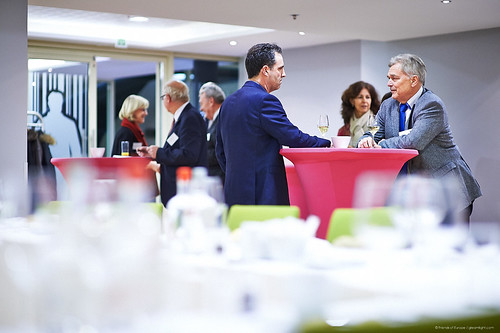 A former Financial Times Brussels Correspondent, Giles Merritt is a journalist, author and broadcaster who has for over four decades specialised in European public policy questions. In 2010 he was named by the Financial Times as one of its 30 most influential “Eurostars”, together with the European Commission’s President and NATO’s Secretary General.

Giles Merritt joined the Financial Times in 1968, and from 1972 until 1983 he was successively FT correspondent in Paris, Dublin/Belfast, and Brussels. From 1984 to 2010 he was a columnist for the International Herald Tribune (IHT), where his Op-Ed page articles ranged widely across EU political and economic issues.

In 1982 he published “World Out of Work”, an award-winning study of unemployment in industrialised countries. In 1991, his second book “The Challenge of Freedom” about the difficulties facing post-communist Eastern Europe was published in four languages. His book “Slippery Slope: Europe’s Troubled Future” (Oxford University Press 2016), was shortlisted for the European Book Prize.