In today’s interdependent world, developments in the Middle East and North Africa (MENA) and in Sub-Saharan Africa have a direct impact on Europe, whose policies in turn also impact the people and governments in these regions.

“The strong connection between Europe, Africa, and the Middle East, is visible today in the so-called refugee crisis,” noted Shada Islam, Director of Europe & Geopolitics at Friends of Europe. “Extending peace to our southern neighbourhood must be a European priority.”

The migration crisis facing Europe is a result of increasing instability and ineffective policies on both continents, said Koen Vervaeke, Managing Director for Africa at the European External Action Service (EEAS). “We are faced with a clear opportunity for Europe and Africa to adopt an approach of shared responsibility. The migration crisis is a reflection of our shared interest in peace, stability, and growth.”

“To find solutions for peace and development in Africa and the Middle East, we must understand the root causes of the problems,” said Ahmed Galal, Managing Director of the Economic Research Forum (ERF) and Egyptian Finance Minister (2013-2014). “Historically speaking, these regions have been plagued with bad politics, bad economics, and more than their share of violent conflicts.”

Tackling these issues means supporting democratic movements and reforms, with a focus on combatting political corruption and crony capitalism; encouraging entrepreneurship, innovation, and youth employment; and addressing the root causes of extremism, instead of responding to extremist violence with more of the same. 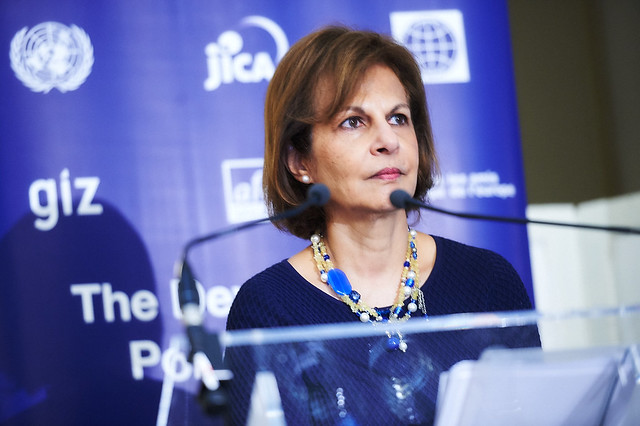 War and conflict in Africa and the Middle East are impacting on Europe in many ways. Violence in the two regions has provoked a refugee crisis of epic proportions, challenging European solidarity and casting a spotlight on the weaknesses of European development policy and foreign and security policy. In addition, war in Africa and the Middle East has meant increased terrorist activity on European soil as ISIS and Al Qaeda spread their tentacles into Europe. Bringing peace and stability to its southern neighbourhood must therefore be a top European priority, with the focus on promoting the economic and political development of Africa and the Middle East through trade, investments, job creation, education and skills-development.  There must also be more interaction with youth, civil society actors and business representatives.

With the exception of Tunisia, the uprisings associated with the Arab Spring have either been thwarted by dictators and monarchs or led to civil war and anarchy. Countries in the region can learn from Europe’s experience in reconciliation between adversaries, conflict management and resolution and post-conflict reconstruction. Europe must also promote the economic and political development of the Middle East and North Africa through trade, investments, job creation, education and skills-development.

Despite considerably higher levels of education, the youth of Africa is struggling to find work. Youth unemployment in sub-Saharan African is estimated to be over 20 per cent. Failure to create sufficient economic and employment opportunities to support decent living conditions for young people will turn this region’s “youth bulge” into a significant risk and threat to social cohesion and political stability. And jobless young people are also more likely to be recruited by extremist groups. Cross-border digital initiatives such as “Smart Africa” and the “One Network Area” and new big-data tools can play a vital role in encouraging investment and job creation.

Founder and Chairman of Investeq Capital and Managing Director of Homa Afrika, Kenya

Executive Director of the Centre for Democracy and Development (CDD), Nigeria

Chairman of the African Youth Panel

Hella’s experience with Young Arab Voices started in 2014 and inspired her to immerse herself in civil society, grassroots activism and women’s empowerment. With the École Normale Supérieure debate team, she won the Tunisian national debate competition and was the fourth best debater. Hella is also a Co-Founder of Aspire to Inspire, an initiative aiming to promote English Spoken Word poetry in Tunis and is currently very active with the socio-cultural grassroots initiative called “Blech 7ess” (Without Noise), focused on pairing the promotion of art with social dimensions. Being a writer herself, she recently published a few works and is also writing lyrics for local bands. She has worked for the German embassy in Tunis since 2017.

Alexander de Croo is a Flemish liberal politician, economist and businessman who leads the Belgian government’s efforts to improve digital growth and development. Most notably, he initiated the establishment of an advisory board called “Digital Minds for Belgium”, made up of the country’s top ICT experts, and launched an ambitious action plan “Digital Belgium”, aimed at positioning the country as one of Europe’s top three digital member states. This digital revolution includes developing 1,000 new start-ups, creating 50,000 new jobs, and achieving an electronic government by 2020.

Investeq Capital Limited provides financing and financial solutions to small and medium sized enterprises (SMEs) across the African continent. Awendo has over 20 years of post qualification experience in audit, accounting, management consultancy and corporate finance advisory. Awendo is a board member of various SMEs as well as member of the advisory board of the Kenya Institute of Management.

In her current role, Rüttgers deals with matters such as management of the ACP Investment Facility, the business plan among other policy and institutional matters. Prior to this, she spent 16 years in the Operational Department as a loan officer in the West Africa, North Africa and Indian Ocean regions.

In his current capacity, Vervaeke is responsible the EU foreign affairs as well as the programming of the EU financial cooperation in the region. He has also been appointed Senior EU Coordinator for the Great Lakes region, working closely with the EU Delegations, the European Commission and EU Member States to advance European objectives of peace and prosperity in the region. Before taking up this post, Vervaeke was the EU Special Representative to the African Union and the Head of Delegation of the European Commission Delegation to the AU in Addis Ababa, Ethiopia.