The EU needs to give citizens more of a say if it wants to fight populist forces in the next election, EU Commissioner, Pierre Moscovici, has insisted. “If I were a candidate in the European elections, I would say ‘take back control for citizens’,” he said during a conversation with Friends of Europe in Brussels on 21 November.

According to Friends of Europe’s recent #EuropeMatters poll, 64% of Europeans are not convinced that life would be worse without the EU, while 49% think the EU is irrelevant. “These European elections are going to be the most important ever – probably the most delicate and, frankly, they might be the most dangerous,” Moscovici warned.

With just six months remaining before the vote, Moscovici speculated that the EU had partly fuelled the current political crisis by failing to make decisions democratically: “We have given priority to efficiency over the democratic dimension, this is particularly true for the eurozone.”

Doubling down on the Commission’s handling of the ongoing budget stand-off with Italy, Moscovici urged the government to respect the EU’s debt reduction rules by saying that blackmail of any kind would not be tolerated, adding he was not “convinced” by the government’s growth projections.

With the March departure date for Brexit rapidly approaching, Moscovici said that it would be crucial to push for a strong eurozone with its own budget, finance minister and monetary fund, all of which should be overseen by MEPs. He also expressed a desire to replace unanimity with majority voting on tax matters, saying that he would table a number of proposals before he leaves office. “The files are ready.” 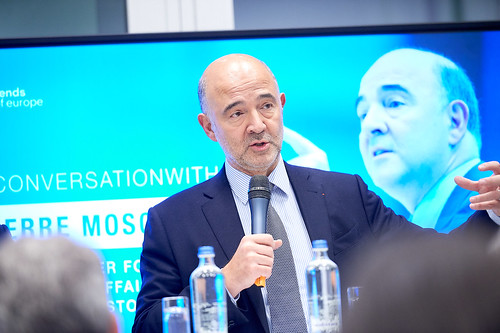 Last weeks’ Euro-summit ended in a pledge to accelerate work on deepening the Economic and Monetary Union – but is agreeing on a banking union and further developing the European Stability Mechanism enough to reform the fragile structure of the eurozone economy? Citizens have a generally positive perception of the euro as a common currency, but macro trends suggest that economic inequalities are increasing among them. And as member states don’t agree on structural reform, it is clear that the road ahead will be challenging.

We have invited Pierre Moscovici, European Commissioner for Economic and Financial Affairs, Taxation and Customs to share his insights on the future of the eurozone with us.

This event is a part of our ‘Conversation with’ series, which this year functions as a look-back at the past term of the Juncker Commission’s College of Commissioners. In a pre-election year the ‘Conversation with’ series will serve as an alternative and distinct approach to the evaluation of European Commissioners and to engage in a candid conversation about their mandate and importantly the work that is unfinished which should be a priority for the next term of the Commission, to work towards a Europe that still matters in 2030.

Proposals for fundamental reform of the eurozone has opened the question on what the future eurozone will look like. Current economic trends suggest that eurozone-citizens’ income inequalities will increase. Simultaneously the opposition from Eurosceptic governments against the regulations in place put additional pressure on the eurozone economies.

Before joining the Juncker-College of Commissioners, Pierre Moscovici was France’s Minister for Economy and Finance. Between 2007 and 2014, he was a member of the French National Assembly from the Doubs constituency, where he was re-elected in 2014. He served as Minister-delegate for European Affairs between 1997 and 2002. That same year, he also served as representative of the French authorities at the Convention on the Future of Europe. After which Moscovici returned to the European Parliament where he served as Vice-President and member, in 1994-1997 and 2004-2007. He holds a master’s degree in economics and political science and a postgraduate degree in economics and philosophy. He is also a graduate of the École Nationale d’Administration.