How do you strike a balance between individual control over personal information and bringing data sources together to power the ‘internet of things’? And do the different approaches of Europe and the United States to data protection make this challenge even greater?

These were the key questions that were discussed at the latest Friends of Europe roundtable dinner on the impact of the 4th Industrial Revolution.
Europeans – in contrast to Americans – have traditionally been wary of sharing their data. To that end the EU General Data Protection Regulation (GDPR) was adopted in 2016, giving citizens control over their personal data and unifying regulation within the EU.

But many critics say that Europe will lose ground in the internet of things if companies cannot easily gather large amounts of data to develop systems such as autonomous vehicles. And both Europe and the United States – without cooperation and a common approach – may find themselves outpaced by China and India in the consumption, delivery and advancement of digital services and technology.

But Europe still has success stories in the digital era. Estonia has promoted the use of electronic solutions for a range of public and other services. The country addresses privacy by carefully considering what data people may want to share and with whom.

“I want my doctor to know my blood type and not to have to test me again, and I want Sofitel to know that I have booked a room here,” said Taavi Rõivas, Estonia’s prime minister from 2014 to 2016. “People have better things to do than to go to public offices to get documents.”

Estonia is a small country, but size doesn’t matter, said Rõivas. “In tech, anything that works in a country of 1.3 million people can be scaled to 1.3 billion people”.
This second of three working group roundtables, held on 7 February, brought together a diverse group of stakeholders to provide input to a ‘future-focused’ report on the 4th Industrial Revolution. Discussions at the event also looked at how to bridge cultural differences between Europe and the United States and how to ensure consumer protection.

The series, which also covers digital skills in Europe, labour markets and regulatory frameworks, was launched in November at an event with Andrus Ansip, European Commission Vice-President for the Digital Single Market. 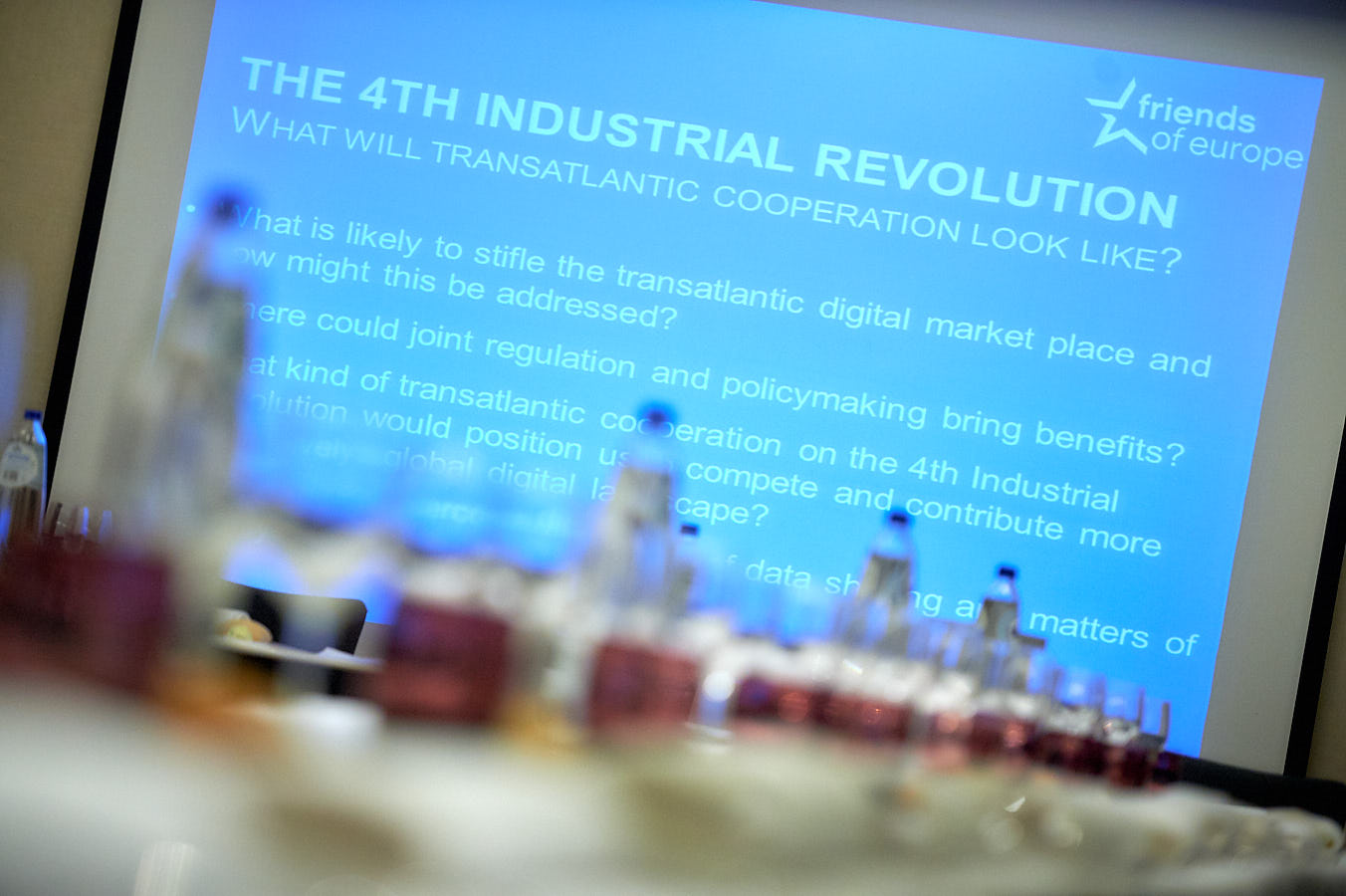 During Autumn 2016 and Spring 2017, Friends of Europe will bring together a diverse group of stakeholders for three working group roundtables to explore the impact of the 4th Industrial Revolution across policymaking, ultimately producing a ‘future-focused report’ on the steps that must be taken to enhance transatlantic cooperation on the 4th Industrial Revolution; see that Europe’s digital skills, labour market and regulatory framework fit the bill of the new era; and ensure that in a context where events such as Brexit and member states’ domestic political crises risk reducing political traction at EU level, momentum on digital matters is not lost.

This initiative was launched by a conversation with Andrus Ansip, European Commission Vice President for the Digital Single Market on 28 November 2016.

With most data holders based in the US, effective transatlantic co-operation could open up the way for Europe to tap a wellspring of opportunity while also ensuring mutually agreed standards of privacy and data protection. This is just one example of how collaboration between the US and the EU could both boost digital growth and improve standard setting towards the development of global digital regulation that not only supports shared interests but also reflects shared values. The outcome of the US election will have significant implications for digital relations between Europe and the US. Politics is however just one aspect. The digital revolution is being driven by market forces and unexpected innovation and takes place on a global stage. In a context where emerging players such as China and India look set to outpace Europe and the US in the consumption, delivery and advancement of digital services and technology, partnership becomes all the more important. Participants in this working group will consider how the 4th Industrial Revolution is impacting differently in Europe and the US, whether the current international institutional infrastructure is equipped to deal with the changes that are taking place and how we can enhance transatlantic cooperation and strengthen both continents’ positions in the global digital market place.

Ben is a British writer and technologist, specialising in the effects of the internet and the ubiquitous digital network on the worldʼs political, cultural and social spheres. He enjoys an international career as a speaker, explaining complex technological and sociological topics to lay audiences and as a high-level advisor on these matters to governments and business. He is currently a Robert Schuman fellow at the European University Institute in Florence, an Innovator in Residence at the Centre for Creative and Social Technologies at Goldsmiths, University of London, a non-resident fellow of the 21st Century Defense Initiative at the Brookings Institute in Washington D.C., a member of the European Commission High Level Group on Media Freedom and contributing editor of the UK edition of WIRED magazine. He is the accredited inventor of the word “Podcast”, published in The Guardian (2004).

Amanda Long is Director General at Consumers International (CI) and a champion of ethical business practice and pro-consumer issues. She joined Consumers International following a highly-successful career working with blue-chip multinational FMCG corporations, small/medium-sized enterprises and the public sector. At Consumers International, Long works – among other things – to promote consumer rights in the digital age and to improve conditions for cooperation with emerging economies in the field of consumer privacy and data protection. Long was shortlisted for the ‘Public Service’ category at the 2011 First Women Awards, hosted by the CBI and Real Business magazine recognising trailblazing women and in 2012 was awarded the ‘Responsible Business Game Changer’ Award by HRH Prince Wales charity, Business in the Community.

Taavi Rõivas has a long history of political service and notably served as Prime Minister of the Republic of Estonia from 2014 to 2016. Prior to this he held other roles, including as Minister of Social Affairs and as member of the 11th, 12th, 13th and 14th Riigikogu (Parliament of Estonia). As a Parliamentarian, he worked as Deputy Chairman of the Parliament, chaired the European Union Affairs Committee and Finance Committee, and from 2014 to 2017 was the leader of the Reform Party. Rõivas has also worked as a corporate customer account manager at an IT company, and as an advisor to several ministers, including: Märt Rask, Minister of Justice; Paul-Eerik Rummo, Minister of Population; and to Prime Minister Andrus Ansip, as well as the elder of the Haabersti city district of Tallinn.

A research engineer by training, Khalil Rouhana has over 25 years of experience within the European Commission. As Deputy Director-General, Rouhana’s responsibilities include policies for the digital economy, notably for research, innovation and industrial strategies, digital solution for societal challenges as well as cybersecurity. Prior to joining the Commission, Rouhana started his career as a research and development engineer for the aeronautics industry and deputy director for the electrical engineering division of the French University in Beirut. Rouhana also served as the director of Esigetel, (Ecole supérieure d’Ingénieurs en Génie Informatique et Télécommunications”), a renowned French school of engineering.