Cities are getting better at combatting and responding to terrorist attacks, but the evolution of threats requires further coordinated worldwide action, said panellists during a Friends of Europe Policy Insight debate ‘Terror and the city: boosting urban resilience to violent extremism’ on 22 February.

Paul Argyle, Strategic Advisor to the Mayor and Deputy Mayor of Manchester attributed part of the widely-praised reaction to the Manchester attack in May 2017 on the basis of a generic response.

“We use the same plan when we respond to an incident, so that we have the same command-and-control structures. We then support that with plans for specific scenarios,” he said.

The 2016 attack in Nice, when a truck was deliberately driven into crowds of people, showed the difficulty of dealing with attacks using vehicles. One way is to change urban design by restricting access to pedestrian areas with physical barriers.

Other solutions were proposed by the private sector, such as the use of drones for disaster recovery. Emmanuelle Pierrard, Head for Energy, Transport and Public Sector at Nokia Benelux explained that the company is investing in drones equipped with intelligence capable of spotting heat and motion, as well as in video and data analytics that could be used to spot an anomaly in a crowd, enabling security forces to act to prevent an attack.

Government structures are also critical. European Union initiatives such as the Schengen Information System have improved in their ability to track potential terrorists. But implementation is the responsibility of individual member states, some of whom are reluctant. Staying ahead of the latest violent methods deployed by terrorists needs constant learning, developing new techniques and adopting best practices. 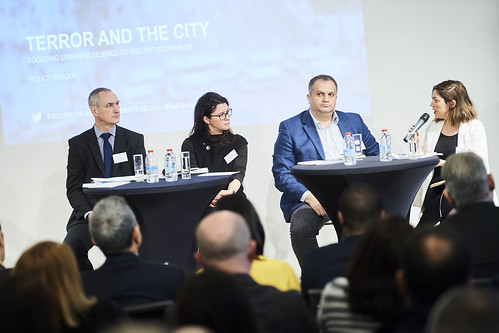 Terror and the City
Start playback
About

This event will explore how cities can boost their resilience to urban terrorism in order minimize the risks of lethal attacks and ensure a quicker bounce-back when attacks occur.

This event is the first of a series of debates on resilience, which aims to develop, foster and promote building resilience into systems, policies and approaches that enables states and societies to withstand, adapt, recover and respond to shocks and crises. It is part of Friends of Europe’s Peace, Security and Defence Programme, supported by the United States European Command (EUCOM). Our work is firmly anchored in our expertise in a range of fields, including energy and climate change, geopolitics, international development, migration and health. We seek a holistic approach to European, transatlantic and global security policies. Security considerations are, in turn, mainstreamed into these areas of expertise, enriching the debate by encouraging experts to think outside their comfort zones.

In recent years many of the world’s major cities have had first-hand experience dealing with the prevention or aftermath of deadly terrorist attacks. With improved capabilities and knowledge, most local authorities are becoming better at tackling terrorist threats and dealing with the consequences of such attacks. But with urban terrorism – especially high-profile but low-tech attacks – expected to continue, national and local governments must do more to minimise the risks of lethal attacks and ensure a quicker bounce-back when they (inevitably) occur. This requires local policies and actions to boost the resilience of individuals, neighbourhoods, communities, businesses and institutions so that they can survive, adapt, and grow in the face of terrorism. Also, as urban terrorism tears down rigid divisions between the developed and developing countries, the focus must be on ensuring a concerted and coordinated response to urban terror among cities worldwide. This can be done through the sharing of knowledge, experience, and the adoption of best practices. Working together on how urban systems plan for, respond and adapt to crises and shocks can help foster cross-sectoral resilience across the world.

Research Fellow at the Centre for European Reform

Head for Energy, Transport and Public Sector at Nokia Benelux

A Harvard-trained economist and former public policy professor, Shpend Ahmeti has moved from the classroom into one of the most challenging mayor’s offices in Europe. Alongside tackling organized crime, illegal building construction, high youth unemployment, and corruption, Ahmeti also faces the challenge of returning foreign fighters. According to data by the independent analytical centre Global Research, at the end of July 2016, 314 Kosovars joined ISIS, thus presenting a crucial challenge to the city of Pristina.

With 31 years of experience working for Greater Manchester Fire and Rescue Service, Paul Arygle has a depth of expertise relating to the emergency services and their partners. In his current capacity, Arygle advises political leaders with a focus on multi-agency collaboration towards creating stronger and more resilient communities in Greater Manchester and chairs the Greater Manchester Resilience Forum. He also provides strategic support to the Mayor’s Independent Review into the Manchester Arena Attack and the Recovery Coordinating Group that was set up after the attack.

Focussing particularly on internal security, criminal law, and police and judicial co-operation, Camino Mortera-Martinez is a specialist in counter-terrorism policies in the EU. Before joining the Centre for European Reform (CER), she was part of the justice and home affairs team of a Brussels-based consultancy, where she worked on various projects with the European Commission dealing with counter-terrorism and international private law. With her expertise she appears regularly in media outlets to discuss responses to terrorism.

Emmanuelle Pierrard has over 20 years of experience at Nokia, where she has combined her scientific and business background to hold various sales and consulting positions. She works on leading Nokia’s smart cities and smart government initiatives by managing public safety and emergency services. Nokia has been developing intelligent solutions and critical communications infrastructure to support cities’ urban planning and public safety. This includes building resilient networks for law enforcement, fire brigades and rescue teams to ensure communications continuity in the case of a terrorist attack or other emergency.