While the sustainability of healthcare provision is under ever-increasing pressure throughout Europe, the price of medicines is not a major risk for health systems, according to a vote by participants at a Friends of Europe debate in Brussels.

The initial perception of the audience changed after hearing the Oxford-style ‘for’ and ‘against’ debate between Thomas Allvin, Executive Director for Strategy and Healthcare Systems at the European Federation of Pharmaceutical Industries Association, and Jo De Cock, CEO of the Belgian National Institute for Health and Disability Insurance.

Audience members took part in online polls at the beginning and end of the Sustainability of Healthcare event, on 28 November, which debated the motion: ‘This House believes that the price of medicines is not a major risk for health systems’. The pre-debate vote showed 39% in favour, but after each speaker made their case and took questions, 62% supported it.

Allvin, who presented the case for the motion, said ageing populations, long-term and outpatient care were the factors driving increases in healthcare spending.

“When you take into account all the rebates and discounts in different systems, medicine’s spending growth is lower than healthcare spending growth overall… it’s not what is driving growth,” he said.

Speaking against the motion, De Cock said he “strongly disagreed” that the current system could continue as if it was “business as usual”.

He said there was a lack of transparency in price-setting mechanisms and said confidential agreements [between pharmaceutical companies and payers] “excluded common democratic control”. Analysis also showed also a “disproportion between prices and measurable health benefits,” he said. 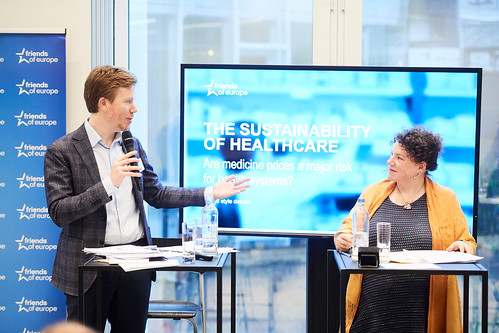 The debate will start with the presentation by Jaime Espin, Professor at the Andalusian School of Public Health and lead author of the report on “Projecting Pharmaceutical Expenditure in EU5 to 2021: Adjusting for the Impact of Discounts and Rebates”, published in 2018.

The motion “Medicines are not a risk for health systems” will be supported by pro and con arguments.

During the debate, participants will be given a chance to have their say and challenge points that have been made by the speakers in favour or against the motion. The discussion will begin with participants casting a pre-debate vote on the motion that is either for, against or undecided. Each speaker will present a brief opening statement in favour and against the motion. The moderator will then open the floor to the room, encouraging debate and inter-panel challenges. Results are determined by a second vote at the end of the debate for comparison against the first.

This event is part of Friends of Europe’s Health and Wellbeing programme, which focuses on how the obstacles of vested interests and short-term political thinking can be overcome in the difficult transition to new healthcare models and systems – and how these new systems can be financed.

This Oxford style roundtable debate will respond to the motion “Medicine prices are not a risk for healthcare systems”.

Following a presentation by Jaime Espin, Professor at the Andalusian School of Public Health and lead author of the report on “Projecting Pharmaceutical Expenditure in EU5 to 2021: Adjusting for the Impact of Discounts and Rebates”, published in 2018, the motion will be supported by pro and con arguments substantiated by expertise opinion on the current state of healthcare in Europe.

The sustainability of healthcare systems across the European Union is under increasing pressure and scrutiny by taxpayers, and sources such as OECD data suggest that healthcare expenditure is rising with an expected growth rate of around 3% by 2030. While pharmaceutical innovations have the potential to improve patients’ life expectancy and quality of life, they also pose challenges to public health systems, including financial stability, post-market surveillance as well as patient access and affordability. However, publicly available data and related forecasts on pharmaceuticals do not paint a comprehensive picture of the situation: new analysis shows that pharmaceutical net expenditure is expected to grow at a sustainable rate of 1.5%. This suggests that the proportion of healthcare expenditure spent on medicines is actually decreasing.

Participants in the room will be encouraged to actively engage and decide where they stand on the role of pharmaceutical expenditure in the sustainability of healthcare systems across the EU.

Professor at the Andalusian School of Public Health

Member of the European Parliament Committee on Industry, Research and Energy

Director of the Association of European Cancer Leagues (ECL)