We feel that growth is very important because without growth we are not able to mobilise resources. But not any kind of growth is OK. We need better growth, quality growth, environmentally sustainable growth

The debate took place at the beginning of a pivotal year for global development policy. The UN General Assembly is scheduled in September to agree Sustainable Development Goals (SDGs) to shape social, economic and environmental development over the next 15 years. These are expected to continue the fight against extreme poverty, while adding goals such as reducing inequality, making cities safer and addressing climate change. Moreover, new sources of financing are growing alongside government financial aid, such as philanthropy, remittances and private investment.

“ODA remains a very important part of the process, but it’s not the solution,” said Fernando Frutuoso de Melo, Director General for International Cooperation and Development at the European Commission. The Commission will put a greater emphasis on implementation, he said – for example, mobilising domestic resources by improving tax systems; and making better use of remittances from migrants, which could go towards investment as well as consumption.

Philippe Orliange, Executive Director for Strategy and Partnerships of the Agence Française de Développement (AFD), called for greater involvement with local governments, which are often the direct supplier of services to people. He also highlighted the role of local financial mechanisms, which can help magnify aid from overseas. “Domestic systems of financing need to work better,” he said. “When we think about financing we tend to focus on overall targets and sectors and price tags. But the quality of the resources that one is able to mobilise is key. “ 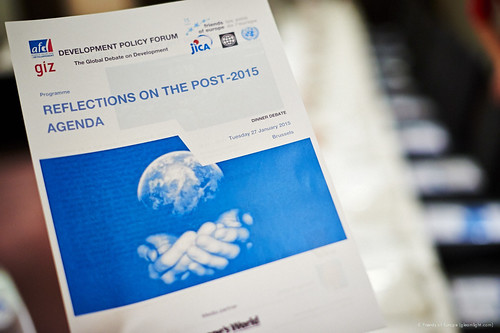