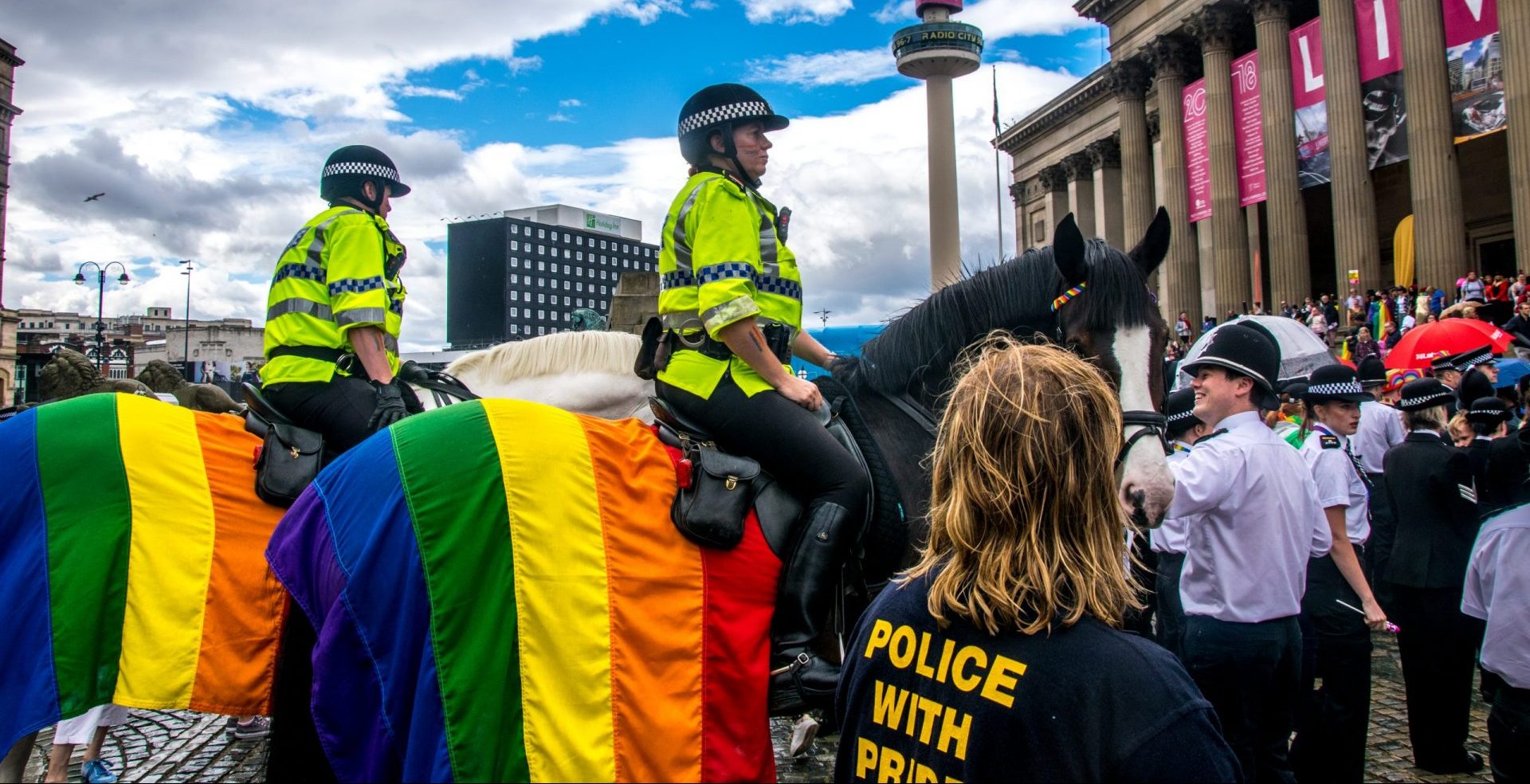 Post-patriarchal security: inclusion and equity for the other 55%

Leadership at all levels is needed to ensure that good intentions and policy commitments to gender inclusiveness in the security forces translate into concrete changes for women and members of the LGBTIQ+ community serving in, or interacting with, the military and police.

That was one key conclusion from Thursday’s Friends of Europe online debate which brought together policymakers, members of the security forces and other stakeholders to look at how to promote greater diversity and inclusion.

“We need political will from the highest level to change things, because we have so many action plans, we have so many declarations, we have so many strategies … but we really need to make this a priority at the top,” (7:57) said Hannah Neumann, Member of the European Parliament Subcommittee on Security and Defence.

According to the #SHEcurity Index, women make up only 11% of military staff and 25% of police forces in EU and G20 countries. That’s despite commitments under the UN Security Council’s 2000 resolution on Women, Peace and Security and the 2018 NATO-EU Joint Declaration pledging to ‘aim for swift and demonstrable progress in … promoting the women peace and security agenda.’

Turning such policies into action is the ‘million-dollar question’ said Alan Sneddon, Police Sergeant at Police Scotland and Director of Communications at the European LGBT Police Association (EGPA). Policies need to be realistic, achievable, measurable and with defined outcomes to be effective on the ground, he said.

There also needs to be a cultural change. “Although the police service is a much newer institution than, say, the military, historically that has been a very masculine and heterosexual, white organisation,” Sneddon told the meeting. “You have a  culture that has developed over many decades, or centuries, which needs to be rethought and needs to be challenged at times.” (17:25)

Among the practical ideas to bring about change, Neumann urged greater use of quotas and training to ‘upskill those who are used to privilege.’ Flexible working plans are needed to take account of ‘peoples’ lived-live experiences,’ suggested Sneddon. He also advocated ‘reverse mentoring’ to generate understanding of different gender perspectives.

There was broad agreement on the need to form an alliance between women, the LGBTIQ+ community and ethnic minorities to achieve progress together, rather than allowing competing agendas to develop.

Marie Meigård, Sergeant Major in the Swedish Armed Forces, said measures to prevent ‘unwelcome behavior’ in the security services are needed more than ever.

She too underscored the importance of leadership to overcome the negative cultural legacy and make the armed forces an attractive place for women and minorities to work.

“The successful integration of women into combat units depends on the beliefs of the commanders,” she said. “If the commanders believe women can be successful soldiers and that women are just as capable as men, then the units will also become more accepting of female soldiers. I believe this applies to other minorities.”(37:16)

Meigård was among several participants who cautioned against assigning service members specific tasks based on their gender. “You are trained as a solider and you have that training. It’s not important if you are a woman or a man, you have a mission to solve,” she explained. “It should be based on my abilities as a human being, not my gender. (52:24)

Looking at the numbers and role of women and minorities in the forces should not obscure the need for a wider reassessment of security priorities, argued Paul Kirby, Co-Director of the UKRI GCRF Gender, Justice and Security Hub at the London School of Economics and Political Science (LSE).

“There is a real danger … that the work on inclusion in existing institutions detracts from, or even replaces, a more comprehensive transformation of what security means and who it is for,” (46:03) he said. Kirby pointed to the EU’s FRONTEX border agency, nuclear disarmament and peace-making policy as examples where there is a need for a broader rethink.

Despite institutional commitment to abide by UN Security Council Resolution 1325 on Women, Peace and Security (WPS), women are still largely under-represented in crisis management, security and defence. NATO and the Council of the EU have striven for more inclusion, adopting a Joint Declaration to consider issues on WPS in 2017. The European Commission has also committed to better inclusion of women in peace and security in its strategic policies. However, the translation of these commitments into practice has fallen short. According to the #SHEcurity Index, women on average make up only 11% of military staff and 25% of police forces in the EU, its member states and the G20. Furthermore, the WPS Agenda lacks a holistic approach to gender and its narrow approach overlooks the experiences of LGBTIQ+ people in conflict and disaster settings, as well as within security institutions. Meanwhile, across the Atlantic, a transgender military ban exposed US service members to be discharged on the basis of gender identity, until the Biden administration repealed the ban in January 2021.

In addition to the obstacles in joining security forces, both women and members of the LGBTIQ+ community face stigma and prejudices once serving, which can often go unrecognised. Whether unbalanced representation is caused by a lack of diversity or reluctant hiring processes, a more pro-active approach is needed in order to achieve better inclusion in the peace and security workforce. Additionally, a broader understanding of the WPS framework would strengthen the concept of gender equality and weaken the effects of discrimination, promoting the transformation of military culture into a more inclusive and diverse environment.

Member of the European Parliament Subcommittee on Security and Defence

Co-Director of the UKRI GCRF Gender, Justice and Security Hub at the London School of Economics and Political Science (LSE)

Marie Meigård is an accomplished officer in the Swedish Armed Force, with over 25 years of experience. She has been heavily involved in the women´s network within the armed forces throughout her entire career. Meigård is also a member of the board of the Swedish Association of Military Officers (SAMO), which is part of the wider EUROMIL organisation. A champion for inclusivity and diversity in culture and the workplace, she is personally committed to the belief that people and strong leadership are essential for change.

Dr Hannah Neumann is a German MEP and Vice-Chair of the Subcommittee on Human Rights (DROI). She is a member of the European Parliament Intergroup on LGBT Rights, which monitors the work of the European Union as well as the situation of LGBTI people in EU member states and beyond. A vocal advocate for gender equality in peace, security and foreign policy, Neumann initiated the #SHEcurity online campaign in 2020 and the subsequent launch of the #SHEcurity Index. The campaign aims to highlight the roles and involvement of women in peace and security (WPS) and accelerate the process towards a better implementation of the WPS Agenda.

Alan Sneddon has been an advocate of LGBTI inclusion and equality for over 20 years. In addition to his current roles at Police Scotland and the EGPA, he has held several senior roles in the UK Gay Police Association (GPA), Scottish LGBTI Police Association and EGPA. He notably held the first ever full time LGBT police staff association post in Europe during his time at GPA. In 2003, Sneddon was also among the police officers to take part in a Pride parade in uniform.

Paul Kirby works with the UKRI GCRF Gender, Justice and Security Hub at LSE, where he is also Assistant Professorial Research Fellow at the Centre for Women, Peace and Security. His research focuses on equality and peace, justice and strong institutions, as well as the implementation of the Women, Peace and Security (WPS) agenda. His current projects explore the politics of the WPS agenda and the emerging governance of masculinity in global politics. Kirby has also worked on feminist and gender theories of wartime sexual violence and pop cultural politics. Prior to joining the Gender, Justice and Security Hub, he was senior lecturer in international security at the University of Sussex.