In a time when Europe is divided and geopolitical tensions are high, North Macedonia has delivered on its promises. By reaching the Prespa Agreement with Greece and normalising relations with Bulgaria, it has bolstered its efforts to join the EU and NATO.

That was the main conclusion that participants reached during Friends of Europe’s ‘Conversation With’ the President of North Macedonia Stevo Pendarovski.

President Pendarovski stressed the importance of his country’s new agreements with its neighbours and the citizens’ support for the Prespa Agreement in a recent referendum. He also reminded the audience that his country is making great strides to better reflect its multi-ethnic identity – elevating the Albanian language to co-official language status and receiving a large backing from multi-ethnic political parties.

However, President Pendarovski also warned that this is far from over. He wants to see EU accession negotiations start before the end of the year. Despite some EU member states expressing doubts about accession talks, he remains optimistic and reminded everyone that no EU member state has really positioned itself against North Macedonia’s accession. When asked if he had a plan B to the EU, he said “my plan B is EU accession”, thus reiterating his commitment to making North Macedonia the next EU member state.

He also hopes that North Macedonia will become the Alliance’s 30th member before the next NATO summit in London. When asked if NATO was perhaps suffering from enlargement fatigue, he recalled that “fatigue goes both ways”, as Skopje is also tired of waiting. Failing to deliver on promises could leave many of those who voted in favour of the Prespa Agreement disillusioned.

When asked if any agreements with neighbouring countries could be threatened by EU inaction, President Pendarovski told the audience that reconciliation initiatives are already in motion with Bulgaria and that he is confident the upcoming Greek parliamentary elections won’t change current relations or the Prespa Agreement. 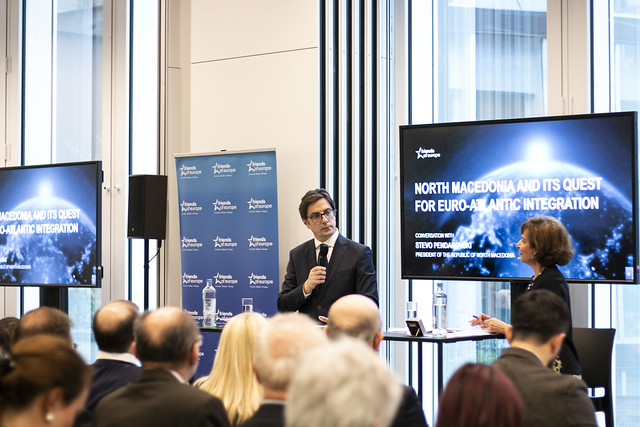 Join us for a ‘Conversation with’ Stevo Pendarovski the newly-elected President of the Republic of North Macedonia. Pendarovski was sworn in as President on May 12, 2019 following his election on May 5. We will discuss his country’s domestic reform efforts, relations with other Western Balkan states and North Macedonia’s quest for Euro-Atlantic integration.

This event is a part of our ‘Conversation with’ series, which offers the opportunity to welcome Presidents, Ministers, EU officials and other decision makers to engage in a candid conversation about recent political developments and future outlooks.

In the last two years, North Macedonia has delivered reforms, put an end to a nearly 30-year long dispute with Greece through the historic Prespa Agreement and also signed an agreement on good neighbourly relations and cooperation with Bulgaria. On May 29, the European Commission recommended the start of EU membership negotiations with North Macedonia, citing the country as a “bright example” in the Western Balkans. EU leaders are expected to discuss the issue on June 20-21. Meanwhile, Skopje is in the process of ratifying the Protocol for NATO membership in a bid to become the Alliance’s 30th member.

Stevo Pendarovski has led a distinguished career as a politician and academic. He served as National Security and Chief Foreign Policy Advisor for two presidents and headed North Macedonia’s State Election Commission. He also worked as an Assistant Professor in International Security, Foreign Policy and Globalisation at the University American College in Skopje. He was a key figure in coordinating North Macedonia’s accession to NATO and is a strong proponent of Balkan integration into the EU as a way of attracting more foreign investment, creating jobs, and maintaining stability and prosperity in the Balkans.

Read more about "The Middle East: time for the locals to step up?"

Read more about "What fuels our drive towards clean transport? A strategic vision for a greener Europe"

view all insights
Read more about "A look at the global balance sheet: how can growing wealth contribute to thriving societies?"