The Mediterranean region faces serious security challenges and threats, compounded by civil war in Libya and Syria. Can Italy, a European bridgehead to this region, play a larger role in EU and NATO security policies and action? In a debate organised by Friends of Europe in Brussels on 25 June 2019, marking the launch of the report ‘Molto Agitato – Italy and Mediterranean security’, four panellists concluded that Italy remains a strong and reliable partner for security and defence, despite recent wobbles.

“As my title suggests, the Mediterranean and Italian politics are stormy places at the moment,” said Paul Taylor, Senior Fellow at Friends of Europe and author of the think-tank’s fifth study on the roles of various EU countries in security and defence. Major problems in this region include growing power rivalries and the shortfalls of NATO and EU policies. The frailty of states like Libya has also dramatically increased the number of migrants and refugees to Europe.

Due to an anti-migrant stance and anger at its European partners for not playing their part, Italy controversially stopped its naval search-and-rescue operations – which had assisted  600,000 migrants over four years – under the EU maritime Operation Sophia. So how can Italy, run now by a populist government with a ‘go-it-alone’ approach marginalising the country from the EU, be better understood and more influential in Mediterranean defence and security? Debate moderator Jamie Shea, Senior Fellow at Friends of Europe, was also keen to know if the EU could better exploit Italy’s potential in those fields.

Frustration and inconsistency often characterise Italy’s behaviour in European security, admitted Antonio Missiroli, Assistant Secretary General for Emerging Security Challenges at NATO. But there can be no questioning the country’s engagement – especially in international peacekeeping missions since the 1980s. This was confirmed by Alessandro Marrone, Head of Defence Programme at the Italian Institute of International Affairs (IAI), the partner of Friends of Europe in producing this report. He pointed to Italy’s constructive engagement in NATO and EU defence, such as leading or taking part in two-thirds (21 of 34) of the EU’s PESCO (Permanent Structured Cooperation) projects. “We see continuity more than change in this field, although Italy does a poor job internationally communicating its work,” he added.

Further Italian weaknesses were highlighted, like a lack of focus on foreign policy. But if we ignore the populist rhetoric, argued Taylor, the country is still engaged in 40 international missions. Italy’s more humanitarian approach to defence and security could also be a good model for other countries.

The EU must talk to Libyans about migration and people smuggling, because this is souring relations between the two sides, warned Mary Fitzgerald, Libya Analyst, award-winning journalist and European Young Leader. She also said the conventional view that Italy and Libya are partners is too simplistic, as the painful colonial past colours Libyans’ perspective of their neighbour – yet today “Libyans have never been less in charge of their destiny”. Worse still, the progress of EU and other international missions in Libya has stopped, since the latest outbreak of conflict there in April 2019.

Panellists mentioned friction over Libya between France and Italy, driven partly by competing oil companies and support for different Libyan factions. “This competition is a poor man’s proxy war,” noted Ambassador Stefano Stefanini, Permanent Representative of Italy to NATO (2007-2010) and non-resident Senior Fellow at the Atlantic Council of the United States. He said France and Italy must work better with Libya, while Fitzgerald called on the EU to move beyond short-term solutions there and to build a robust and collective response. More broadly, debate participants called for the EU (including Italy) and NATO to cooperate better on defence and security across the Mediterranean. 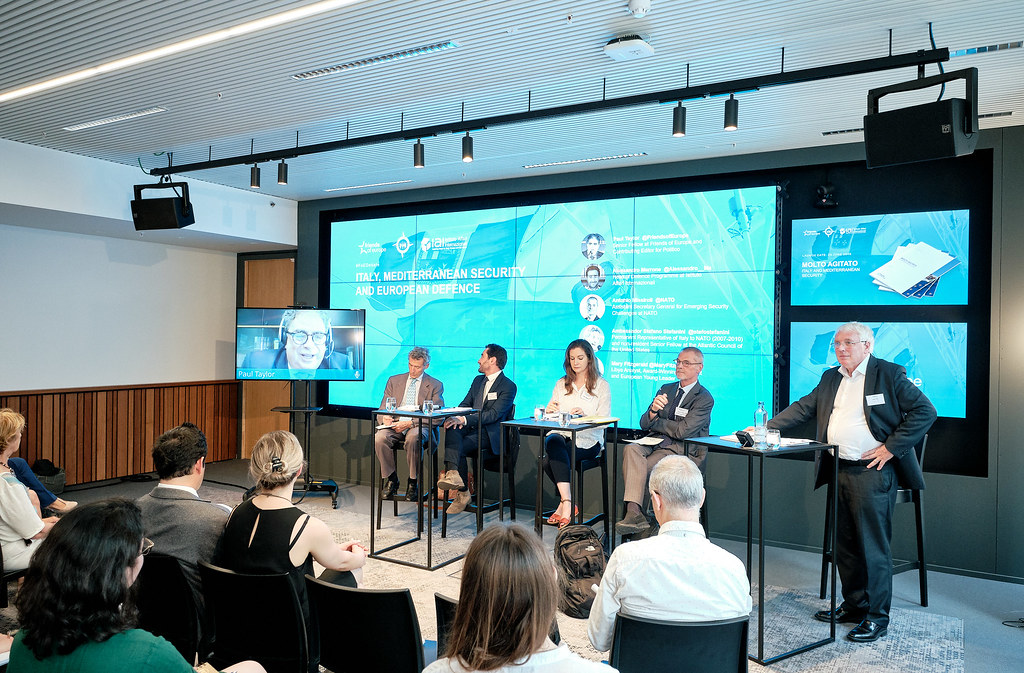 Italy is a central player in security in the Mediterranean both because of its geostrategic location and role as a hub for NATO, US forces and the United Nations, and its contributions to military operations, peacekeeping, training and capacity building in the Med, North Africa, the Western Balkans and the Middle East all the way to Afghanistan. Yet Italy feels neglected or mistreated by its EU partners on migration, fiscal policy and defence industry issues, and frustrated at being shut out of the inner circles where decisions are shaped in NATO, the EU and the UN While the latter resentment is stronger among elites than among the wider population, the sense of anger over migration and fiscal constraints fuelled the election of an unprecedented coalition of anti-establishment populists in 2018.

In this context, Friends of Europe is releasing a study on Italy and the future of European defence and Mediterranean security. Authored by Paul Taylor, Senior Fellow at Friends of Europe, POLITICO columnist and for many years Reuters EU Affairs editor, it examines Italy’s strategic position in a European and international context, its defence relationships and diplomatic alliances, the role and current state of the armed forces, the place of its defence industries, and the challenges in the Mediterranean region. It will offer recommendations for how to optimise Italy’s defence policy to best assure its own long-term security interests and those of Europe.

The study complements three similar studies on France, Germany, the United Kingdom and Poland‘s roles in European security and defence.

Given its geo-strategic position and as one of the founding members of the EU and NATO, Italy plays a crucial role as a security actor both within Europe and on a global level.

Without a comprehensive EU and NATO approach, in partnership with Arab and African countries, security challenges are bound to increase in the Mediterranean region and Italy will remain particularly exposed. Yet the new Italian government risks alienating some of the key partners it needs for its own security and for the security of the region.

Friends of Europe Senior Fellow Paul Taylor will present his latest study “Molto Agitato – Italy and Mediterranean security” and offer recommendations for the way ahead addressing questions such as:

Researcher and Analyst specialising in the Mediterranean region with a particular focus on Libya, Trustee of Friends of Europe and 2013 European Young Leader (EYL40)

Mary Fitzgerald is a researcher and analyst specialising in the Mediterranean region with a particular focus on Libya. She has consulted for a number of international organisations including in the areas of peace building and civil society.

She has worked with the International Crisis Group (ICG), the United States Institute of Peace (USIP) and the European Council on Foreign Relations (ECFR) among others. She is a Non-Resident Scholar at the Middle East Institute in Washington DC, an Associate Fellow at the International Centre for the Study of Radicalisation, King’s College London, and an Associate Fellow at ISPI in Milan. Mary has also worked on wider initiatives with UNESCO, the Anna Lindh Foundation, the British Council and other cultural organisations. Her writing has appeared in publications including Foreign Policy, The New Yorker online, the Washington Post, Financial Times and the Guardian.

Alessandro Marrone is the Head of IAI Defence Programme and responsible for research projects for EDA, NATO bodies, and industries in the aerospace and defence sector. He is a professor on Military Policy at the Italian Minister of Defence’s academy and teaches Strategic Studies at the University of Perugia. He is a member of the Editorial Board of IAI webzine AffarInternazionali, and collaborates as free-lance journalist with several Italian magazines and web-magazines, including Airpress, Aspenia online, Eastwest, Rivista Italiana Difesa and Rivista marittima, where he writes about European defence and the EU’s role, NATO, Italy’s defence and foreign policy, defence industry and market, and security in the Mediterranean region.

Dr Antonio Missiroli held the position of NATO Assistant Secretary-general for Emerging Security Challenge in 2017. Previously, he was Director of the European Union Institute for Security Studies, Adviser at the Bureau of European Policy Advisers (BEPA) of the European Commission, Director of Studies at the European Policy Centre in Brussels, and Senior Research Fellow at the W/EUISS in Paris. Missiroli is also a professional journalist and has taught at the Universities of Bath and Trento, Boston University and SAIS/Johns Hopkins, the College of Europe, and PSIA/Sciences Po.

Ambassador Stefano Stefanini’s long diplomatic career has earned him a reputation as a distinguished expert in transatlantic affairs, international security, defense industry, and Western and European relations with Russia. He has held various high-level positions such as: diplomatic adviser to the then-President of Italy, Giorgio Napolitano; Permanent Representative at NATO where he contributed to the drafting of NATO’s 2010 Strategic Concept, and deputy chief of mission at the Italian Embassy in Washington. He has also previously served at the United Nations in New York and Moscow. Ambassador Stefanini is a recipient of the Grand Cross of the Order of Merit of the Italian Republic and has received honors from several foreign governments.

Paul Taylor is a Senior Fellow at Friends of Europe and the author of Friends of Europe’s European Defence Cooperation report series. A Paris-based journalist, he also writes the “Europe at Large” column for Politico. He previously spent four decades working for Reuters as a foreign correspondent in Paris, Tehran, Bonn and Brussels, as bureau chief in Israel/Palestine, Berlin and Brussels, as chief correspondent in France, as diplomatic editor in London, and finally as European affairs editor. His assignments have included covering the Iranian revolution, the Cold War Euromissile crisis, the 1991 Gulf War, German reunification, the Maastricht summit, France in the 1990s, EU enlargement, the Eurozone crisis and the fall of the Muslim Brotherhood government in Egypt.