A common EU army and single security budget are not on the cards, despite member states’ recent moves towards closer defence cooperation.

But given the multitude of threats facing the bloc, experts at a recent Friends of Europe Café Crossfire and Policymakers’ Dinner debate called for a paradigm shift in thinking and ways of working in response to modern peace, security and defence matters, starting with closer links between military spending and security-related policies such as diplomacy, aid and trade.

At the 6 December events – ‘Modern security is more than military spending’ – participants hailed recent moves to pool EU military forces and equipment in “permanent structured cooperation” (PESCO), a move made possible by the 2009 Lisbon Treaty. But they insisted that collective defence will continue to be handled by NATO, despite mixed messages from the US on the usefulness of the transatlantic alliance.

While US President Donald Trump has focused his ire on NATO “free riders”, and called for a boost in defence spending, a Friends of Europe policy brief, ‘Cooperative security requires a budget’, argues for a broader, more than money approach to the problem.

The brief calls on governments, NATO and the EU to do a “security spending” audit across all policies, beyond defence, to root out where spending is worthwhile and where it can be cut. However, ring-fencing development aid and coming up with a joint EU “military doctrine” need to come first, participants agreed, to ensure money is not being diverted to the wrong places. 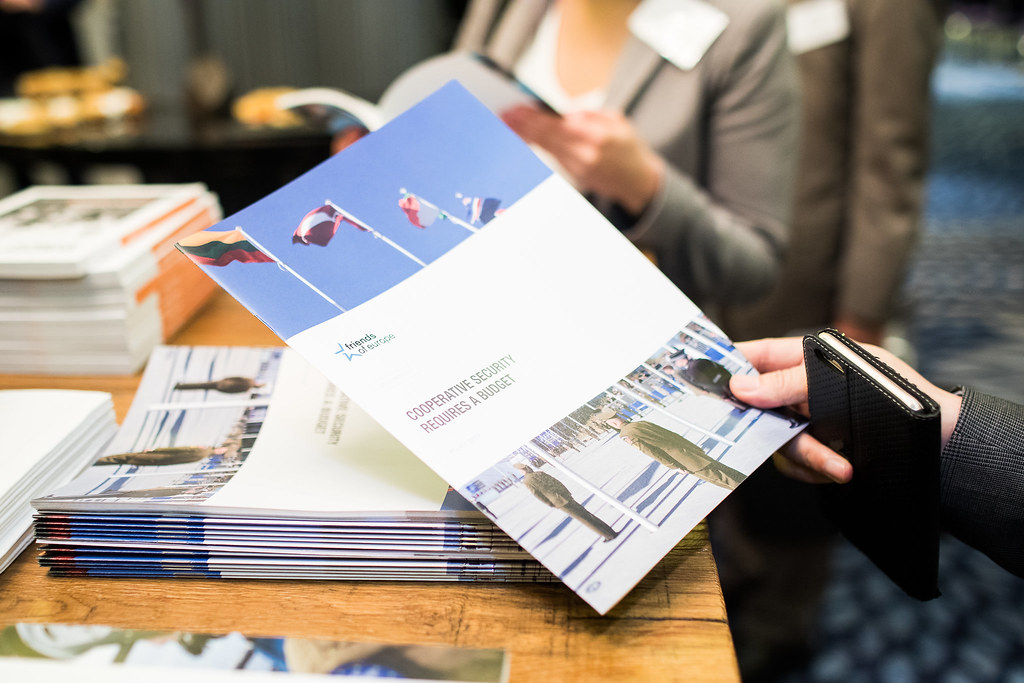 Should you not be able to view the photo gallery, please click here.

This event will look at the possibility of a ‘single security budget’ as a key step to face emerging threats that no longer correspond to conventional defence capabilities. A holistic approach to security could entail a rethink in budgetary planning, both for the European Union and NATO alliance.

The event is part of Friends of Europe’s work on peace, security and defence, firmly anchored in our expertise across a range of fields, including energy and climate change, geopolitics, international development, migration and health. We seek a holistic approach to European, transatlantic and global security policies. Security considerations are, in turn, mainstreamed into these areas of expertise, enriching the debate by forcing experts to think outside their comfort zones.

European security and defence cooperation has gained fresh momentum, most notably through the recently signed Permanent Structured Cooperation (PESCO), an ambitious binding framework that aims to build a true ‘cooperative security’ approach. To achieve such a holistic approach to security, spending targets could go beyond a strict focus on defence towards a ‘single security budget’ that would include budgets for the police, intelligence services, border guards and counterterrorism, as well as parts of development budgets and humanitarian assistance – in line with official development assistance rules. Some countries are already moving towards a comprehensive approach to security financing, including Germany who argues that its spending on development aid – 0.5% of its GDP – also makes a major contribution to international security. Balancing defence expenditure with diplomacy and development aid has however also proved controversial, with some arguing that it puts into question the impartiality and political neutrality of development and humanitarian aid.

Chief of Staff at Europol

Deputy Director at the German Council on Foreign Relations (DGAP)

with Minhea Motoc, Deputy Director-General of the European Political Strategy Centre (EPSC) and Michael Rohschürmann, Advisor for Security and Stabilisation at the Deutsche Gesellschaft für Internationale Zusammenarbeit (GIZ) (the dinner is by invitation only).

Amy Dodd is the chair of the CONCORD structure working on financing for development and one of the authors of the CONCORD AidWatch Report 2017, which monitors the quality and quantity of aid provided by EU member states and the European Commission. She also leads the UK Aid Network (UKAN), a network of British NGOs that advocate for more and better aid through joint policy, research and lobbying. Prior to joining UKAN, she worked as an advisor in the Shadow International Development team in the UK Parliament, focusing on gender, economic development, conflict and fragility, and climate change issues.

Brian Donald has been in his current role at Europol since 2010, with specific responsibility for promoting cross-departmental coordination and is therefore active across all areas of the business. Prior to his position at Europol, Donald was seconded to the National Criminal Intelligence Service as Head of International Policy, working in EU justice and home affairs where he represented the UK at a wide range of working groups and meetings. He previously worked in the Serious Organised Crime Agency (SOCA), where he worked on drugs investigation, surveillance and major crime/incident investigation. Within the Agency, he headed the International Strategy and Partnerships Department responsible for Europe, the EU, Turkey and the Balkans.

An established and experienced diplomat, Ana Gomes has cemented a reputation as a strident supporter and defender of democracy, human rights, social justice and the rule of law. She has previously been involved in the EU Middle East Peace Process and has led several EU election observation missions in Africa and South-East Asia. Gomes is also a vocal critic of the maladministration of EU law by multinational corporations to minimise tax costs and the negative impact this has on European citizens, governance and society.

Christian Mölling is a leading expert on military capabilities, the defence industry, the EU Common Security and Defence Policy and NATO. Before joining the DGAP, he held research and leadership positions with the German Marshall Fund of the United States, the German Institute for International and Security Affairs, the Center for Security Studies at ETH Zurich, and the Hamburg Institute for Peace Research and Security Policy. He has been a visiting fellow at the European Union Institute for Security Studies in Paris, the Royal United Services Institute (RUSI) in London and the Paris-based Fondation pour la recherche stratégique.

In his current post, Nicolas Suran represents France’s position regarding the EU’s Common Foreign and Security Policy (CFSP) and the Common Security and Defence Policy (CSDP). Prior to this assignment, he served as the Head of EU External Relations at the French Ministry of Foreign Affairs. A graduate of France’s prestigious Paris Institute of Political Studies and Ecole Nationale d’Administration, Suran has served in various diplomatic posts throughout his career, including at the French Embassies to Hungary, Germany and Syria.