Beware the anarchy of a political vacuum after a military intervention! This was a key conclusion from the second debate in the ‘Lessons from History’ series, held in Brussels by Friends of Europe on 24 September 2019. Featuring three peace and security experts, with deep expertise and work experience in the Balkans, the event explored lessons learned from the Kosovo conflict* in 1999 and current challenges for the region’s stability and prosperity.

“The international community’s response to Kosovo signalled a new proactive approach to preventing crimes against humanity,” said the moderator Jamie Shea, Senior Fellow, Friends of Europe and former deputy assistant secretary-general at NATO. He was eager to assess this controversial conflict’s legacy – with the benefit of two decades of hindsight – especially given the new Responsibility to Protect (R2P) commitment unanimously endorsed by the United Nations in 2005.

All three panellists agreed that Kosovo is now a safer and better place, thanks to the intervention of NATO and the European Union. At the time, military intervention there was seen as an “overwhelming humanitarian necessity” to protect the Kosovar Albanian minority from violence, remarked Mats Berdal, Professor of Security and Development at the Department of War Studies, King’s College London and Director of the Conflict, Security and Development Research Programme (CSDRG). He argued that, today, this action is widely considered as legitimate, despite initial legal ambiguities. This indicates a shift in the international community’s viewpoint, whereby state sovereignty is no longer considered as absolute when it comes to protecting a country’s minorities in dire circumstances.

The biggest lesson drawn from Kosovo is the danger of creating a “political vacuum” after military intervention, noted Andrew Gray, EU Editor at POLITICO Europe and former Reuters chief correspondent for the Balkans. This conclusion – backed up by the other panellists – is informed by his work as a journalist on the field, during the very volatile year right after the Kosovo conflict. He witnessed the regional chaos and violence suffered by all ethnic groups, especially the targeting of thousands of Serbs and other minorities right after the NATO bombing campaign. “One senior UN official in Kosovo told me that he felt there was too much tolerance for intolerance,” added Gray, despite the presence of a large NATO and UN civil administration.

For Païvi Nikander, Deputy Head of Mission in OSCE Field Operations Mission to Kosovo (2013-17), the chief challenge there is the lack of an exit strategy for the international community – a view echoed by the other panellists and audience. This leaves Kosovo highly dependent on international aid. “We should have seized the momentum of 1999 and looked harder for the windows of opportunity,” said Nikander. While the economy has grown by 4% annually since 2015, Kosovo still faces a 30% unemployment rate, low international investment and a brain drain of young people. The EU has tried to mitigate these issues by setting up the European Agency for Reconstruction (EAR) to manage its assistance programmes in the region.

Wrapping up the debate was special guest Admiral James G. Foggo III, the Commander of Allied Joint Force Command Naples, US Naval Forces Europe, and US Naval Forces Africa, with responsibility for 4,000 troops in Kosovo. He argued that today’s economy in Kosovo is not helped by a special tariff slapped by the government on imports from Serbia in 2018. However, he cited reasons for optimism, praising several Kosovan entrepreneurs in the IT and fruit sectors for stimulating economic growth. This led the debate moderator to conclude: “We all agree on the urgency of a definitive political solution for Kosovo, but in the meantime, citizens and entrepreneurs should build the future with their own hands!” 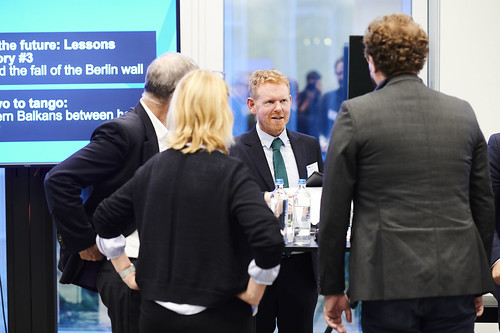 *For the United Nations Development Programme, references to Kosovo shall be understood to be in the context of Security Council resolution 1244 (1999). For the European Union, this designation used is without prejudice to positions on status, and is in line with the UN Security Council resolution 1244/1999 and the International Court of Justice Opinion on the Kosovo declaration of independence.

With 20 years after the end of the Kosovo* conflict, this event will explore the response by the international community to the conflict, their successes and failures as well as the aftermath of their intervention in order to draw conclusions and lessons for today’s transnational and multi-faceted conflicts.

*For the European Union, this designation used is without prejudice to positions on status, and is in line with UN Security Council resolution 1244/99 and the International Court of Justice Opinion on the Kosovo declaration of independence. For the United Nations Development Programme, references to Kosovo in this document accordingly shall be understood to be in the context of Security Council resolution 1244 (1999)

In our series of ‘Lessons from History’ we take a step back and understand history’s profound effects on our world, allowing us to better prepare for future crises.

*For the European Union, this designation used is without prejudice to positions on status, and is in line with UN Security Council resolution 1244/99 and the International Court of Justice Opinion on the Kosovo declaration of independence. For the United Nations Development Programme, references to Kosovo in this document accordingly shall be understood to be in the context of Security Council resolution 1244 (1999)

Professor of Security and Development at the Department of War Studies, King’s College London

Mats Berdal is a Professor of Security and Development at the Department of War Studies, King’s College London, where he is the Director of the Conflict, Security and Development Research Group (CSDRG) . From 2000 to 2003 he was Director of Studies at the International Institute for Strategic Studies (IISS). He has published extensively on the subject of UN peacebuilding interventions after the end of the Cold War and the comparative study of civil wars.

Andrew Gray is EU editor for POLITICO Europe. He spent 15 years at Reuters as a correspondent and bureau chief, with postings in Germany, Geneva, the Balkans, West Africa, London and Washington, where he covered the Pentagon. He was based in Kosovo from June 1999 to October 2000 before moving to Belgrade, where he served as chief correspondent for the Balkans until 2004. He was also the supervising editor for a fellowship program that gives journalists from the Balkans the chance to work on in-depth international stories.

Päivi Nikander is an independent expert consultant on peacebuilding and transition. She teaches post-conflict reconstruction and institution-building in Chulalongkorn University, Bangkok. Nikander has worked extensively in the Western Balkans and was the Deputy Head of Mission in the OSCE field operation in Kosovo* (2013-2017). Prior to this post, she worked in the European Agency for Reconstruction in Skopje. She has also acted as Head of local government unit at the International Civilian Office in Pristina, where she supervised the implementation of the Ahtisaari plan.