Can Europe reduce the distance and better include citizens in decision-making?

Europe should be less state-driven and more citizen-driven. This key conclusion emerged from a debate organised by Friends of Europe in Brussels on 30 January 2019, featuring six senior politicians from the European Union’s major political parties. The event marked the launch of ‘Citizens’ Mandate’ – featuring new policy insight that is part of the think tank’s year-long initiative #Europe Matters – Shaping An EU Citizens’ ‘Mandate For Change’.

“The EU must change or it will become irrelevant,” remarked the moderator Dharmendra Kanani, Director of Insights at Friends of Europe, while highlighting EU citizens’ growing alienation from political dialogue, as demonstrated by Brexit and the rise of populist parties. He added that the recently published Citizens’ Mandate report – which features 11 policy options, such as greater EU citizens’ participation, merging the digital and single market, or an open dialogue on integrating migrants to Europe – also concluded that the bloc must change and reform itself.

The debate’s panellists all agreed that citizens should play a bigger role in the EU, for example by direct participation in policy and budget-making via citizen assemblies and digital platforms. Yet there was a notable split between the panellists, as well as audience members. Some advocated direct democracy, underpinning traditional structures within the European Parliament. Others worried that more participative democracy could undermine existing EU processes and structures.

Each panellist listed their priorities for better citizen engagement and decision-making – centred on security, prosperity and tackling climate change. Sustainable development was vital for everyone, including a call for EU policies to be coherent with the 2015 Paris Agreement on climate change. Prosperity should be built around equality, education, social support, and jobs – especially digital, high-tech, and small businesses. Panellists also called for better wealth distribution, for instance by abolishing tax havens and reducing fiscal evasion across Europe via improved monitoring systems.

There was less consensus about EU security, with diverging views on cybersecurity. However, the youngest speaker, Ms Colombe Cahen-Salvador from the new pan-European party VOLT – and clear winner of the informal audience poll on which panellist had best responded to the Citizens’ Mandate – forthrightly called for a European defence force. The unexpected victory of VOLT raises questions about the messages and approaches that established parties have long held and provides an interesting point of reflection.

The debate also spotlighted the need for better communication of the European project to citizens and governments. Good news stories might be the best way of reaching out to EU citizens and making Europe matter in future. Thanks to their positivity and emotion, such stories can reignite everyone’s passion for Europe, against the backdrop of an uncertain and fracturing world. 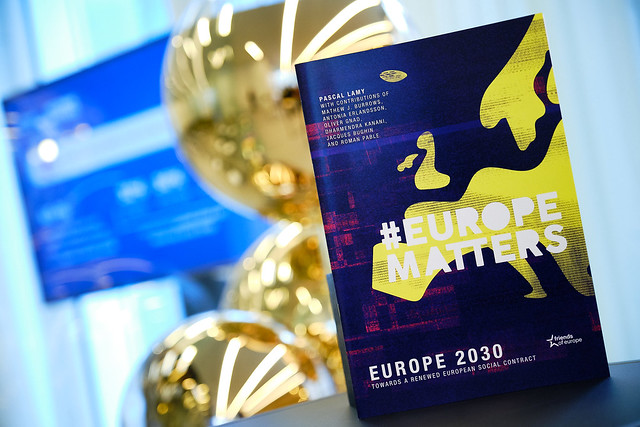 #EuropeMatters is Friends of Europe’s flagship initiative, bringing together business leaders, policymakers, civil society representatives, foresight experts and citizens ahead of the European elections to co-design a Europe that still matters in 2030.

We are kickstarting the European election campaign with a call to action: ‘The Citizens’ Mandate’. This policy insight, based on the mandate given to us from 11 000 EU citizens will be presented to members of the European Parliament to ignite political discussions around citizens’ needs to test policy choices and set out a pathway for the incoming European leadership.

Our objective is simple – to mobilise a coalition of the willing united by their belief that #EuropeMatters and to together ensure that Europe is better prepared to take strategic action to align the future we face with the future we want.

Will parliamentarians step up to their plates
The yellow vests movement; the recent Strasbourg shooting; Brexit and Euroscepticism, increasing differences between the east, south and north of the EU and rising inequalities – all point to a volatile, unpredictable and highly dynamic context for the forthcoming European elections in 2019. Citizens are being courted by politicians appealing to emotional common denominators of fear, lack of security and mistrust.

Yet, from Friends of Europe’s citizen poll we know that they want Europe not less of it. That doesn’t mean Europeans are happy with the EU as it is. The survey’s key message was: “Without change and reform, the EU will remain irrelevant to a majority of its citizens.” Almost half the interviewees (49%) questioned the relevance of the EU to their own lives, and about two-thirds (64%) were unconvinced that if the EU were to disappear overnight life would be worse.

What citizens also want is greater financial transparency, more say in decision making, priorities to be jobs, safety and climate change. How do we get there?

Friends of Europe is kickstarting the election campaign with its own call to action: ‘The Citizens’ Mandate’ policy insight as part of its year-long initiative #EuropeMatters. The policy insight will ignite political discussions around citizens’ needs at the heart of the debate, setting out a pathway and test the potential policy choices for the next EU mandate.

Vice-Chair of the Group of the European People's Party

Colombe Cahen-Salvador is the co-founder and the Policy Lead at Volt Europa, where she is responsible for the creation of policies and the political direction of the movement. Volt Europa is a pan-European movement now present in 31 countries, that aims to revolutionise the way politics is done on the European level. She previously worked for Robert F. Kennedy Human Rights, as a legal fellow in the International Strategic Litigation Unit. She has been awarded the inaugural Duke Law School’s International Law and Human Rights Fellowship, during which she worked at the OHCHR and at the Norwegian Refugee Council.

Lara Comi is currently member of the EPP Presidency as Vice-Chair, where she is in charge of youth policy, communication strategy and relations with China and the Americas. She was elected to the Italian Parliament in 2008 before joining the European Parliament the following year. Comi has been a member of several European delegations for relations with third countries, currently serving on the Committee for the Internal Market and Consumer Protection and the delegation for relations with the United States. In addition to these roles, she has held the position of appointed Rapporteur for the Opinion on European Union Defense for the past 5 years.

Merja Kyllönen is a Finnish Member of the European Parliament, having been elected in 2014. Prior to this, she held office at the Finnish Parliament and served as Minister of Transport, where she was instrumental in encouraging the implementation of a toll charge to incentivise public transport use. She is both a group coordinator and an active member of the Committee on Transport and Tourism. She is also a member of the Delegation to the EU-Russia Parliamentary Cooperation Committee. Furthermore, Kyllönen plays an active role within the GUE–NGL as a member of the group’s Bureau.

Florent Marcellesi has been a Member of the European Parliament for the Spanish Green party EQUO since 2016 and was previously spokesperson for the party. He is currently a member of the Committee on Women’s Rights and Gender Equality and the Vice-President of the European Forum for Renewable Energy Sources (EUFORES). In addition to this, he serves as a member of the think tank Ecología Politica and has authored titles such as “Which Europe do we want?”. He was trained as a civil engineer and urban planner, and is a specialist in international cooperation.

Ricardo Serrão Santos has been a Member of the European Parliament since 2014. Aside from his role as coordinator of the Socialist Group for Fisheries, Serrao Santos serves as Vice-Chairman of the Intergroup, “Climate Change, Biodiversity and Sustainable Development”. A sitting member of a variety of scientific advisory bodies, of which the Paris Oceanographic Institute, he was recently selected to join the UNESCO group responsible for drawing up the United Nations agenda for the Decade of Ocean Science for Sustainable Development (2021-2030). He has accumulated several honourable mentions, prizes and awards, including a Gift to the Earth, WWF’s highest accolade. In 2012, he received the Autonomous Insignia of Recognition of the Azores and was later knighted “Chevalier de l’Ordre de Saint Charles” by Prince Albert II of Monaco.

Pavel Telička is the Vice-President of the European Parliament responsible for Human Rights and Democracy. Among his previous posts, he served as Deputy Minister of Foreign Affairs, State Secretary for European Affairs and Chief Negotiator of the Accession of the Czech Republic to the European Union. His contribution to the country’s successful integration into the EU has earned him both a Memorial Medal and recognition from former President, Vaclav Havel. Prior to being elected to the European Parliament in 2014, Telička served as the Czech Ambassador to the EU and as the first Czech European Commissioner. He is currently the coordinator of ALDE MEPs in the Committee on Transport and Tourism.