Technology can help educate, inform and connect refugees, allowing them to integrate in their host countries and contribute to economic growth.

At a Friends of Europe event on 22 June, entrepreneurs and philanthropists set out how innovation was helping people to help themselves.

“This is a human rights issue,” said Jacquelline Fuller, President of Google.org and the Google Foundation. “We need to be welcoming as a global community.”

More than a million refugees arrived in Europe last year, most of whom ended up in transit camps, where tech giants such as Google have now begun providing wifi and laptops.

“Refugees need much more than shelter and food distribution,” said Jérémy Lachal, Director of Libraries Without Borders, which partnered with the UN’s refugee agency and designer Philippe Starck to create an “ideas box”, a portable library and media centre with its own internet connection and power source.

For Friends of Europe, fresh from launching a paper on how to solve the migration crisis, refugees can bring tangible benefits. “Our position on the issue of refugees and migrants is that they provide a net gain to our societies and communities – they don’t offer a net loss, as some would have us believe,” said Friends of Europe executive director Dharmendra Kanani. 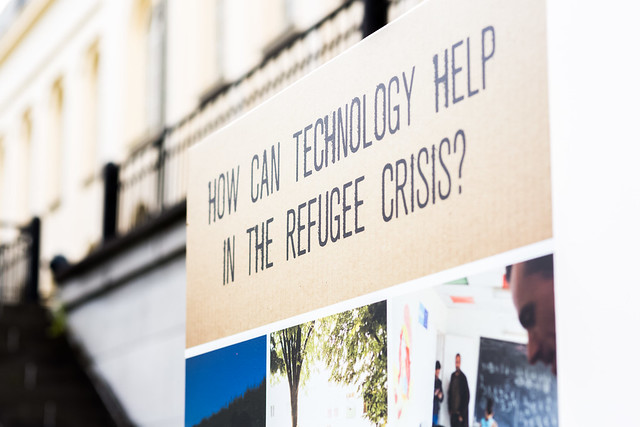 The number of people fleeing war, violence and economic deprivation is higher today than at any time since the Second World War – and more people are expected to be on the move in the coming years, with many expected to seek safe haven in Europe. The size of the problem has overwhelmed governments and there appears to be no lasting solution for the moment. But civil society and business have taken up the challenge in a diverse range of voluntary initiatives including funding immediate humanitarian relief and providing skills training, jobs and vitally needed digital solutions for pressing needs like communication, information, education and health.

President of Google.org and the Google Foundation

Director of Libraries Without Borders

StartupBoat.eu and engineer at Deutsche Telekom