Migration is never far from the top of the news agenda, but what practical steps are we taking to recognise, and address, the issue of people migrating for environmental and climate change-related reasons – now and in the future?

That was the burning question at a Friends of Europe policy insight event in Brussels on 8 November, which debated the complexities of defining, preparing and empowering those whose lives and livelihoods are impacted by environmental factors. These include events ranging from: sudden disasters like earthquakes; extreme weather events such as typhoons; increasingly occurring floods and droughts, and slower-onset challenges like rising sea levels.

The issue of defining such migrants – for example as ‘climate refugees’, with the legal status that comes with it – is still up for debate, explained Caroline Zickgraf, Deputy Head of the University of Liège’s Hugo Observatory.

The term ‘climate refugee’ doesn’t recognise that most people are internally displaced, “doesn’t encapsulate all the dynamics that link climate change and migration” and could lead to “misguided, isolated policies”, she said. As an example of an alternative approach she said some South Pacific island states had a policy of ‘migration with dignity’ and were pre-emptively training residents for integrating elsewhere in future.

Debate moderator Dharmendra Kanani, Director of Insights at Friends of Europe, said “the pace of change of climate change is re-writing what we need to think about” and suggested that the European Commission carry out work to provide an “evidential base” for a new typology.

Sheila Sealy Monteith, Ambassador of the Permanent Mission of Jamaica to the EU and UNESCO, said care should be taken not to conflate ‘environmental migration’ and ‘climate migration”, as it wasn’t straightforward for people to attribute their circumstances to climate change.
There was an crucial need for decision-makers to “more seriously understand” what was happening on the ground, she added.

Meanwhile Linnéa Engström, MEP and Rapporteur on women, gender equality and climate justice, said a global strategy for addressing climate displacement was needed, but it should be “gender responsive”.

Citing the fisheries sector, in which women’s work is essential but “never recognised”, she said women were strong change-makers and that “these are the people that we need to empower in order to tackle these challenges on a local level”. 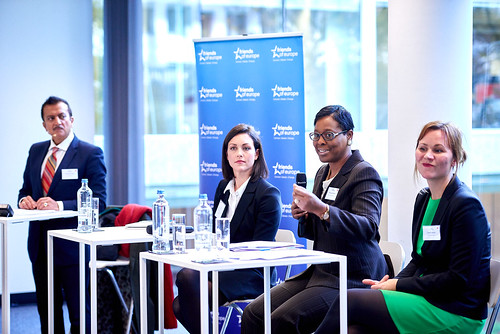 In 2017, the number of forcibly displaced people globally rose to 68.5 million. By 2050, experts predict a significant rise in the number of environmental migrants worldwide – a number that comes in addition to the refugees, asylum-seekers and internally displaced people that will continue to flee their homes out of a fear of persecution. This early warning creates a unique opportunity for governments, the private sector and civil society to prepare for the changes to come and to seek out opportunities to curb destruction and loss of life.

This debate is part of Friends of Europe’s Migration Action programme, which aims to examine the imperative of migration in the context of economic sustainability and demographics, as well as its impact on public services, communities and security. This Policy Insight will allow speakers and participants to contemplate current and future climate change-induced migration trends, with the aim of offering concrete proposals on ways forward.

Predictions about the future of climate change-induced migration vary widely, with experts citing the potential for 25 million to 1 billion environmental migrants by 2050, with 200 million the most widely agreed upon estimate. By looking to environmental drivers of migration as they stand now – such as crop failure, rising sea levels and drought – policymakers around the world may be able to work ahead of the curve to prevent loss of life, to ensure safe and regular migration flows and to prepare their societies for such possible disruptions. As environmental migrants additionally fall outside the legal definition of a ‘refugee’, and are therefore not afforded the same protections, is a new framework needed to fill this gap?

Member of the European Parliament and rapporteur on women, gender equality and climate justice

Deputy Head of the Hugo Observatory – Environment, Migration, Politics at the University of Liège

As a proud advocate for mainstreaming feminism into the climate change debate, Linnea Engström is the author of the recent book Climate Feminism. In the European Parliament, she serves as Vice-Chair of the Fisheries Committee as well as a substitute member of both the Environment Committee and the Committee on Women’s Rights and Gender Equality. In her role, Engström has also served as rapporteur on the European Parliament’s report on women, gender equality and climate justice, which raises the issue of climate refugees and calls for mainstreaming gender into climate action.

Sheila Sealy Monteith is a career diplomat of over 30 years, currently supporting Jamaica’s relationship with Belgium and the EU. She also serves as Chairwoman of the African, Caribbean and Pacific Group of States (ACP) Committee of Ambassadors. Sealy Monteith has taken part in a number of debates, including on the importance of empowering women and girls to combat climate change. Prior to her post in Brussels, she served as Under-Secretary for Multilateral Affairs, Ambassador to Mexico and as High Commissioner to Canada.

Caroline Zickgraf’s primary research areas include the migratory impacts of climate change on coastal populations, transnationalism and transnational families and (im)mobility. Her latest research has led her to investigate the relationships between populations who do and do not migrate in the face of environmental changes, and includes case studies of Senegal, Vietnam and Japan. Zickgraf has consulted for the World Bank, the Food and Agriculture Organization of the United Nations (FAO), the Nansen Initiative and the International Centre for Migration Policy Development (ICMPD) on the links between climate change and migration.