Poland is seeking a permanent American military base on its soil at the expense of cooperation with European allies, according to Paul Taylor, Senior Fellow at Friends of Europe and author of the new Friends of Europe report ‘”Fort Trump” or Bust? Poland and the future of European defence’ that emphasised the risks of such a strategy. However, Polish speakers at the report’s launch said their country’s geographical exposure to Russia and history of abandonment by European allies made it uniquely vulnerable. Hence, it has needed to place special importance on its relations with the US.

The shift comes at a time when Poland is more prosperous, stable and safe than ever before. Its memberships of NATO and the European Union have helped maintain peace with neighbours and generate high rates of economic growth, investment and employment. Yet Jarosław Kaczyński, the leader of Poland’s ruling Law and Justice Party, is haunted by feelings of national insecurity and historical grievance, said Taylor. These have led Kaczyński to pursue bilateral defence ties with the US rather than strengthening collective activities with European partners and NATO allies.

“Poland has embarked on quite a sharp change of direction in its national security policies,” said Taylor, noting that the pivot to Washington coincided with a deterioration of Warsaw’s relations with the EU over the rule of law, and with the main west European powers, Germany and France.

“Poland is pursuing a risky strategy and setting itself up for disappointment. There may be short term political benefits before it sinks in that ‘Fort Trump’ is not going to happen.” President Donald Trump was not pulling US forces back from Syria and Afghanistan in order to park them in a base in eastern Poland waiting for the Russians to come, he said. Washington’s main security concern was China, not Europe.

One reason for preferring the US is its military might and Europeans’ relative lack of defence activity, noted Anna Maria Anders, Polish Secretary of State and Senator. “The European Union, instead of doing something about common defence, spends a lot of time talking about it,” she said. “Poland will always be sceptical about Europe because of 1939 – when France and Great Britain did not come to its aid.”

For some Poles, western Europeans don’t understand the traumas that their country has been through – first during the Second World War and then under the Soviet Union’s domination of Eastern Europe. “Western Europe knows very little of Poland,” said Jacek Saryusz-Wolski, a Member of the European Parliament and former Polish Minister for European Affairs. “We feel in touch with history more than you do after 60 or 70 years of happiness. On the US, it is not a risky strategy. It is the only strategy.”

Donald Trump appears less committed to NATO than previous US presidents. Though he is unlikely to pull the US out of the alliance, Poland would still benefit from wider cooperation with other NATO allies and the rest of the EU, said Jamie Shea, a Trustee of Friends of Europe and former Deputy Assistant Secretary General for Emerging Security Challenges at NATO. “Poland has an interest in getting involved in European defence projects,” he said – “not just in the Mediterranean but to fill the gaps in NATO defence.” 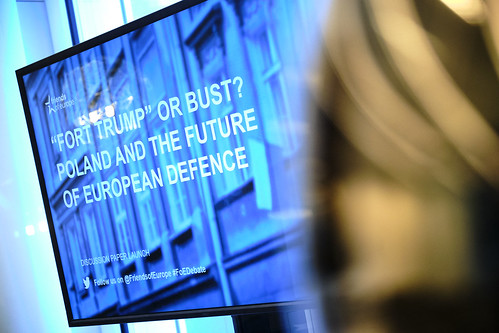 Poland has never been more prosperous, stable and safer than at the start of the 21st century as a sovereign state as well as a member of NATO and of the European Union. It is at peace with its neighbours and enjoys enviable rates of economic growth, investment and employment. Yet the country is haunted by feelings of national insecurity and historical grievance. Chairman of the ruling party Law and Justice, Jarosław Kaczyński sees enemies and threats everywhere and safety, if at all, only in the tightest possible bilateral defence relationship with the United States rather than in the collective embrace of European partners and NATO allies.

In this context, Friends of Europe is releasing a study on Poland and the future of European defence. Authored by Paul Taylor, Senior Fellow at Friends of Europe and POLITICO columnist, it examines Poland’s strategic position, its defence relationships and diplomatic alliances, the role and current state of the armed forces, and the place of its defence industries. It will offer recommendations for how to optimise Poland’s defence policy to best assure its own long-term security interests and those of Europe.
This study will be launched both in Brussels and Warsaw, and it will be available online in January 2019.

The study is a part of Friends of Europe’s series on European defence cooperation. It complements three similar studies on France, Germany and the United Kingdom’s roles in European security and defence.

Poland has never been more prosperous, stable and safer than at the start of the 21st century as a sovereign, independent state and a member of NATO and of the European Union. It is at peace with its neighbours and enjoys enviable rates of economic growth, investment and employment. Yet the country is led by a reclusive politician haunted by feelings of national insecurity and historical grievance. Jaroslaw Kaczynski sees enemies and threats everywhere and safety, if at all, only in the tightest possible bilateral defence relationship with the United States rather than in the collective embrace of European partners and NATO allies.

Polish Secretary of State and Senator

Anna Maria Anders is both a Senator and a Minister in the Republic of Poland. She is Secretary of State in the government of Poland’s Prime Minister, Mateusz Morawiecki, where she is the Plenipotentiary for International Dialogue. As a senator, she represents Poland’s eastern flank which includes: Lomża, Augustów and Suwałki. In addition she represents Poland in the WIP (Women in Parliaments) Global Forum, a global network of female parliamentarians that supports greater participation of women in politics and promotes equal rights of women worldwide.

Jacek Saryusz-Wolski is a Polish diplomat and politician who is currently Member of the European Parliament. He was a Member of the Committee on Foreign Affairs, which he also chaired for two years, and served as Vice President of the European Parliament. Prior to his career in Brussels, Saryusz-Wolski became the first Polish Minister for European when this office was created in 1991.

Retiring from NATO in September 2018 after 38 years at the organisation, Jamie Shea has occupied a number of senior positions at NATO across a wide range of areas, including external relations, press and media and policy planning. As NATO’s spokesperson, he was the face of the Alliance during the Bosnia and Kosovo conflicts. He later worked as the Director of Policy Planning in the private office of former Secretary General Rasmussen during the preparation of NATO’s 2010 Strategic Concept. Shea is also a regular lecturer and conference speaker on NATO and European security affairs.

Tomasz Szatkowski serves as a Deputy Minister – Under-Secretary of State in the Ministry of National Defence. He has a long experience in national security, especially in defense policy and armaments as well as the supervision of special services and public media. In recent years, he has been assigned by the Minister of National Defense Antoni Macierewicz to prepare the Polish position for the NATO Warsaw Summit. He has also led the Strategic Defense Review which has been finished in May 2017.

Paul Taylor is a Senior Fellow at Friends of Europe and the author of Friends of Europe’s European Defence Cooperation report series. A Paris-based journalist, he also writes the “Europe at Large” column for Politico. He previously spent four decades working for Reuters as a foreign correspondent in Paris, Tehran, Bonn and Brussels, as bureau chief in Israel/Palestine, Berlin and Brussels, as chief correspondent in France, as diplomatic editor in London, and finally as European affairs editor. His assignments have included covering the Iranian revolution, the Cold War Euromissile crisis, the 1991 Gulf War, German reunification, the Maastricht summit, France in the 1990s, EU enlargement, the Eurozone crisis and the fall of the Muslim Brotherhood government in Egypt.