Friends of Europe’s 2016 Energy and Climate Summit took place in Brussels at the end of an extraordinary few weeks in climate politics. The Paris Agreement, the landmark 2015 climate deal, reached the required threshold for ratification, many years earlier than anyone anticipated. A long-anticipated agreement to cut emissions from aviation was also made. A global deal was also made to phase out hydrofluorocarbons (HFCs), one of the most harmful greenhouse gases.

But the Summit also took place in the context of a European Union that is grappling with a number of serious challenges, including Brexit, frosty relations with Russia, limited progress on the Energy Union and the ongoing weaknesses of European economies.

The Paris Agreement offers an opportunity to reset climate policy to meet the targets agreed at the COP21 climate conference, and the EU is working on several measures, including reforms to the Emissions Trading Scheme (ETS) and efforts to stimulate innovation.

While representatives of the business community were supportive of a higher carbon price, they warned of the ongoing importance of protecting carbon-intensive industries from competition from outside Europe.

It is also important to build European industries in new, low-carbon technologies such as energy storage and low-carbon transport. But this is not just a question of technological innovation. It also requires new business models and financing arrangements, such as the EU’s European Fund for Strategic Investments (EFSI) and Innovfin, the European Investment Bank’s fund for innovative companies.

The summit heard that Europe does not have to decide between decarbonisation and energy security. Instead, cutting emissions will help to make Europe more energy secure by reducing demand for imported fossil fuels.

While home-grown renewable energy will be important, the key to cutting carbon while increasing security of supply is energy efficiency. But Europe is currently missing out on massive opportunities because policymakers are obsessed with the supply side and continue to ignore the potential of demand management. Cutting demand will not only reduce emissions and consumer bills, it will also cut the amount of new capacity that is needed. 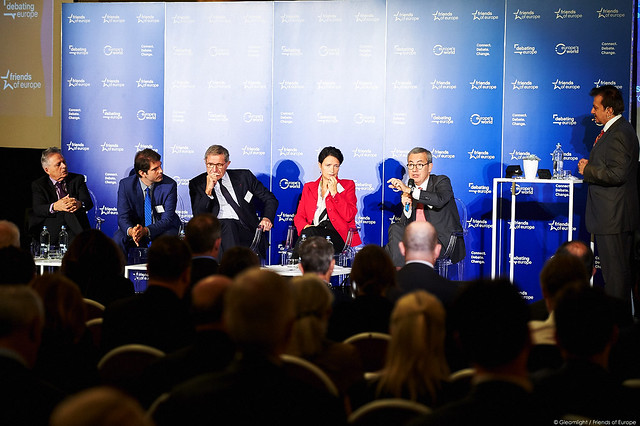 Friends of Europe’s annual Climate and Energy Policy Summit will discuss this year the main challenges ahead for global leaders in view of implementing the COP21 Paris Agreement and ensuring affordable and secure energy in the context of rapidly changing energy geopolitics. Key questions will include:

The COP21 Paris Agreement marked a long-awaited turning point for global cooperation on climate change. Yet how the burden will be shared between countries and how they will reassess their climate and energy policies is uncertain. Despite the political momentum, weakening global economy and low fossil fuel prices risk discouraging governments from delivering on their commitments and investing more in clean energy. Europe’s climate action is facing an EU ETS carbon price now at 20-month low, the introduction of the market stability reserve is threatened by Polish legal actions and EU member states are still divided over the need to review the 2030 climate pledges.

State secretary at the Slovak Ministry of environment

Chairman of the Board of Directors, Engie & Suez

New technologies and behaviours are shaking up the global energy status quo, disrupting traditional business models, transforming the ways energy is produced, distributed and consumed, and altering citizens’ interactions with energy. Renewables self-generation, cleantech crowdfunding, digitalisation, in-home energy storage, smart meters and grids, low-carbon mobility not only promise to increase productivity and cut CO2 emissions, but are also expected to reduce energy bills, create jobs, reduce countries’ reliance on fuel imports and optimise energy supply. The quickening pace of energy innovation is such that many technologies are commercially viable faster than predicted, yet markets still struggle to catch up and to reap the benefits this ‘new normal’ promises.

Making energy supply reliable is among the main pillars of the EU’s Energy Union. With this in mind, the European Commission proposes new measures to improve states’ cooperation, develop new infrastructure projects, and strengthen its role in international gas buying agreements. Yet the EU continues to rely heavily on only a few suppliers, pays high import costs, and lacks adequate investments and interconnections. “National interests” prevail when deciding on energy-mix choices, protecting industrial competitiveness and negotiating international deals. The 28 national electricity markets are still fragmented, with aging infrastructure that is unsuitable for a low-carbon transition.

Professor in International Relations at Royal Holloway, University of London. Associate with the Geopolitics of Energy Project at Harvard University's Belfer Center for Science and International Affairs

Member of the European Parliament committee on industry, research and energy; rapporteur on “Delivering a new deal for energy consumers”

Special advisor to the chairman & chief executive officer of EDF

Throughout his career, Jean-Pierre Clamadieu presided over some of the biggest industry players in Europe. He started his career within the French public sector at the Ministry of Industry and as technical advisor to the Minister of Labour. Later on, as member of the Rhône-Poulenc group, he held several management positions. Jean-Pierre was CEO and Chairman-CEO of the Rhodia group before becoming Vice Chairman of the Solvay Executive Committee. He then served as Chairman of the Executive Committee and CEO of Solvay. Since 2018, he has served as the Director and Chairman of the Board of Engie as well as Senior Independent Director of the AXA Board of Directors.

As an economist specialised in low-carbon infrastructure investment, Edward Calthrop has over ten years of experience at the European Investment Bank, largely within the renewable energy team. This role requires interacting with project developers, contractors and financiers across a wide range of technologies and countries. He also took part in several discussions with policy makers regarding the scaling up of low-carbon investment.

John Cooper has extensive experience of the private energy sector. He worked for 27 years at BP, where he held several commercial, technical and policy leadership roles, most recently leading BP’s strategy for compliance with renewables and GHG regulation in European transport fuels. In April 2015, he was appointed Director General of FuelsEurope and Concawe, representing the interest of 40 companies operating refineries in the EU.

Ruxandra Draghia-Akli serves as the European Commission representative on the Governing Boards of most Joint Technology Initiatives of the EU within different industrial sectors. A globally recognised leader in the field of nucleic acid delivery for therapeutic and vaccination applications, she is also an inventor and has submitted over a hundred patent applications. Before joining the Commission, Draghia-Akli worked in biotechnology companies, including as Vice-President, managing research programmes in the areas of gene therapy and DNA vaccination.

Ingrid Holmes’ work focuses on how to better target financing for the low carbon transition in Europe as well as how to accelerate it by reforming capital markets. Prior to working for E3G, she worked for Climate Change Capital, a boutique investment bank specialising in low carbon investment, and as Energy and Environment Adviser in the UK Parliament and Science Policy Adviser at the Department for Environment. She also worked for nine years in science publishing and journalism, with her last role based in New York working for the Nature Publishing Group. Holmes has recently been appointed member of the European Union High Level Expert Group on Sustainable Finance.