The European Union is under threat from populists riding a wave of public discontent over globalisation, immigration and mainstream politics. Britain’s referendum vote to leave the EU is a manifestation of citizens’ anger – the latest in a seemingly endless series of crises afflicting Europe’s integration project.

The absence of clear leadership is both a symptom and cause of this malaise. To fill this leadership vacuum, Friends of Europe has developed its European Young Leaders (EYL40) programme. Since its creation five years ago, this programme has brought together established young talent from around the continent in a quest to find innovative solutions to Europe’s problems.

A group of European Young Leaders gathered at the European Commission’s Berlaymont headquarters on 14 October to exchange ideas with senior political figures working on issues ranging from climate change to research and innovation, and from accountability and transparency to the dynamics of EU regionalism. 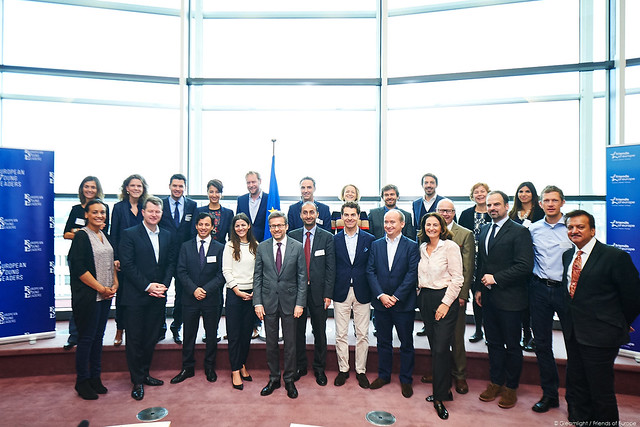 In the 21st century, the EU project and its leadership is under attack from populists on the Left and Right. New figureheads are emerging, riding a wave of anger to criticise globalization, immigration and the liberal order. The fault lines in Europe are all too clear – a democratic deficit, a lack of unity and an inability to respond to multiple, simultaneous and often unpredictable challenges. Leadership, or the absence of it, is both the symptom and the cause of this malaise.

In sharp contrast, and in response to this emerging leadership vacuum, Friends of Europe has led the development of the European Young Leaders (EYL40) programme, a unique, inventive and multi-stakeholder network that aims to promote a European identity by engaging the continent’s most promising talents in initiatives that will shape Europe’s future. It represents a new generation of leaders, able to think innovatively in order to tackle the increasing disconnects between citizens and political elites, rebuilding the trust that is vital to democracies. The 2015-2016 class of European Young Leaders met in Marseille in May this year to think through the issue of the migration and refugee crises – providing very insightful and productive perspectives and approaches to address one of Europe’s biggest modern challenge.

The purpose of the meeting on 14th October is to build on this development and apply the combined strength and capacity of European Young Leaders to work through the knotty problem of how to reclaim leadership and reimagine how the EU project might be rebuilt. The State of Europe high-level roundtable on the previous day will have a session specifically on: “How do we fall in love with the idea of Europe as a political, social and economic force for good?” The outcome of this discussion will provide a useful prompt for the discussion on the 14th, however the substance of the conversation will be facilitated by a conversation with four leaders, all with substantial portfolios and experience in EU matters – from climate, research and innovation, accountability and transparency to the dynamics of EU regionalism.

Carlos Moedas, EU Commissioner for Research, Science and Innovation; Radoslaw Sikorski, Senior Fellow at Harvard University’s Center of European Studies and Polish Minister of Foreign Affairs (2007-2014); Emily O’Reilly, European Ombudsman and Janos Pasztor, Senior Advisor to the UN Secretary General on Climate Change will provide a sense of the emerging challenges for Europe in the next 2-3 years from their vantage point. European Young Leaders will engage directly with these leaders to gain a better understanding of their constraints and the potential  opportunities for re-building the EU project. On the back of this input and discussion, European Young Leaders will offer their thoughts and ideas, which will be fed into developing the Friends of Europe’s future programme of work.

Emily O’Reilly has served as the European Ombudsman since July 2013. In her role, she investigates maladministration in the institutions and bodies of the European Union. She was awarded Schwarzkopf Europe Award in 2017 and the Prague European Summit Vision for Europe Award 2018 in recognition of her work. Prior to being elected to her current office, O’Reilly served as the first female Ombudsman and Information Commissioner in Ireland and was additionally appointed Commissioner for Environmental Information in 2007. A former journalist, author and political editor, she has received numerous accolades, including Woman Journalist of the Year in 1986 and Journalist of the Year in 1994.