Due to technical difficulties, portions of this video have been edited/modified. These modifications applied only to the segments spoken by the Friends of Europe moderator, Shada Islam, and in no way alter the questions or order of the discussion. No changes were made to Commissioner Johansson’s segments. 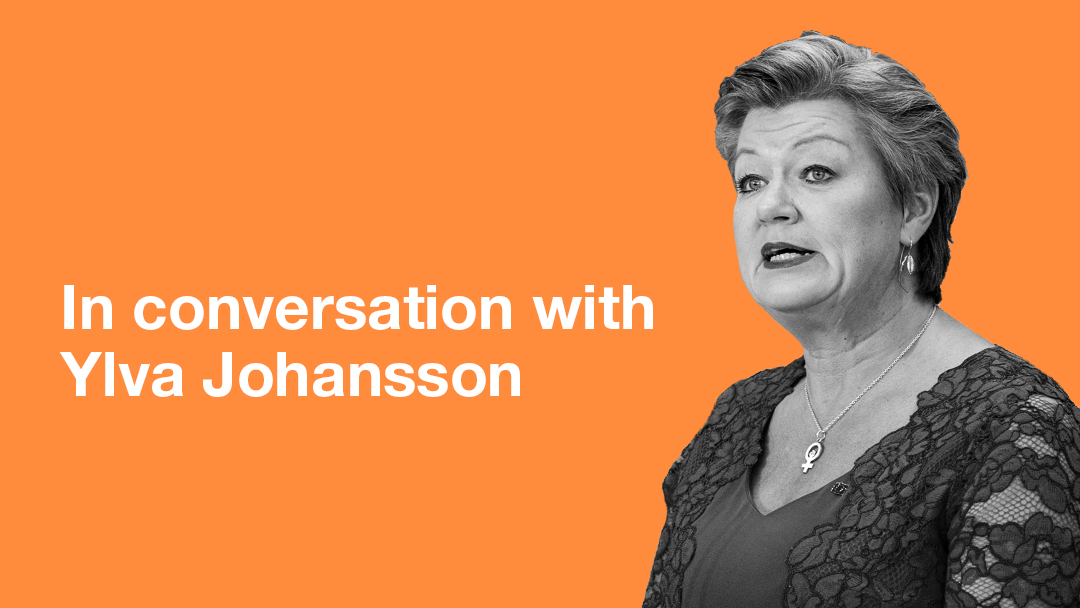 Developing a fresh start on migration

Can Europe develop a ‘fresh start on migration’ even as it finds itself in the midst of a global pandemic? The road may be rocky, but many signs point to the potential for the COVID-19 crisis to play a role in shaping a new narrative. These and other issues were discussed in an interactive online conversation with European Commissioner for Home Affairs Ylva Johansson held on 18 May.

“We’ve seen the vital role being played by essential workers, many of whom are from migrant backgrounds,” observed Shada Islam, Director for Europe & Geopolitics at Friends of Europe. “Is this the right time for the narrative on migration to change in Europe?”

Acknowledging the risk that a global economic recession brought on by the COVID-19 crisis could amplify extremist and xenophobic voices, Johansson nonetheless expressed optimism: “Migrants are here, and have been here for generations, and they are part of us – they are part of we.”

In a normal year, there are 1-1.5mn migrants coming to the EU, only about 200,000 of whom arrive irregularly. Without migrants who perform essential work, the Commissioner stressed the EU would be a much poorer union: “COVID-19 really opens our eyes to how much our societies depend on migration.”

In her home nation of Sweden, for instance, she noted that one-third of doctors are born outside of the country – most of whom come from outside of the EU.

But regardless of a person’s point of origin, a new narrative should focus on what people can contribute – particularly in the post-crisis recovery. “We cannot focus on background all the time,” she said. “We have to focus on individuals . . . irrespective of their background – what they can contribute to society, the fact they are part of our society.”

But the pandemic has of course also played a disruptive role – particularly in terms of asylum procedures and the Commission’s progress towards a New Pact on Migration & Asylum.

With procedures like in-person asylum interviews interrupted, the EU issued guidelines in mid-April suggesting that member states make use of technology to be able to continue processing asylum applications, even as resettlement operations were disrupted.

Reiterating that a response to the pandemic should in no way abridge basic human rights – including the rights to international protection and due process – the Commissioner agreed that would be of the utmost importance for Europe to show solidarity as it works towards a New Pact on Migration & Asylum.

Expressing her hope that the Commission would be able to present the pact in early summer, Johansson nevertheless agreed that convincing sceptical countries to accept a compromise on migration and asylum would be no easy task. She added that it is unacceptable that “those countries with the lowest ambitions are able to set the standard”.

With most internal borders shut in response to the onset of the pandemic, the Commission has also issued guidelines on restoring a fully functioning Schengen area and free movement in the European Union. Member states can open borders gradually – and need not open all borders at once – following assessment of the severity of regional outbreaks and the potential for the virus to spread again. Once a border is open, however, all EU citizens must be allowed to cross it without discrimination to nationality. That said, however, Johansson pointed out that border checks are not as reliable a way of fighting the virus as is social distancing.

Looking to the future, Johansson acknowledged that the migration issue is charged with lots of emotion and controversy, and expressed her hope that migration could become more “normalised” – joking that she looked forward to the day when the migration portfolio would become “as boring as any other European policy area”.

Due to technical difficulties, portions of this video have been edited/modified. These modifications applied only to the segments spoken by the Friends of Europe moderator, Shada Islam, and in no way alter the questions or order of the discussion. No changes were made to Commissioner Johansson’s segments.

Developing a fresh start on migration

As Europe responds to the spread of a global pandemic, it must also remember its moral responsibility to safeguard migration and ensure a more inclusive and realistic narrative on the issue. To share her hopes, vision and aims for Europe’s ‘fresh start on migration’, Friends of Europe is delighted to welcome European Commissioner for Home Affairs Ylva Johansson for an interactive discussion on the issues.

The ‘In Conversation With’ series provides an opportunity to engage with the EU’s new college of commissioners. Featuring interactive, interview-style discussions, the event will take place online with a limited number of virtual seats available to our multi-stakeholder network of members from the private, public and civil society sectors. These participants will be able to pose questions and interact directly with the Commissioner.

Following on European Commission President Ursula von der Leyen’s aim to engage more closely with citizens, the event will also be livestreamed. Viewers will have the opportunity to submit their questions in writing, and the best rated ones will be asked to the Commissioner during the interview.

Since 2015, responses to migration flows to Europe have been ad hoc and inconsistent, highlighting the cracks in the Union and making clear the need for increased solidarity among Member States. It’s time for a fresh start. But while the European Commission works to develop a New Pact on Migration and Asylum, there remain questions as to how events of early 2020 have impacted their work. From the outbreak of COVID-19 to developments at the Greece-Turkey border and the challenge of moving unaccompanied minors out of camps, it has become more important than ever for policymakers to keep inclusion and respect for human lives and dignity at the centre of all they do.

Ylva Johansson was appointed European Commissioner for Home Affairs in December 2019, taking up the position following years of service in the Swedish government. Having most recently served as Swedish Minister for Employment and Integration from 2014-2019, she previously held positions as Minister for Health and Elderly Care and Minister for Schools. A former teacher, Johansson has also served as a Member of the Swedish Parliament.

Read more about "The European Health Data Space: the foundation for European digitalised healthcare focused on the patients’ needs"