The German Marshall Fund of the United States (GMF), along with Friends of Europe, and Women in International Security (WIIS), hosted a conversation in Brussels with U.S. Secretary of the Air Force, Deborah Lee James.

Deborah Lee James offered a vision of today’s global security challenges including the problems in Europe’s periphery. She assured the audience of the United States’ longstanding commitment toward Europe’s security, stating that the transatlantic partnership is more crucial than ever. Secretary James elaborated on the day-to-day topics she deals with, such as air, space, and cyberspace issues. She pointed out that the nature of today’s threats are “more diverse and complex,” which require strong partnerships between the U.S. Air Force and public-private stakeholders.

Secretary James also identified current challenges, such as the terrorist threat from the IS group, Russia’s violation of international rules through the illegal annexation of Ukraine’s Crimean peninsula, as well as humanitarian crises such as Ebola. Secretary James called upon more international cooperation to face these challenges. Secretary James finished her remarks by emphasizing her belief in the global partnership between the U.S., the EU, and NATO, describing it as a “cornerstone for global security”. 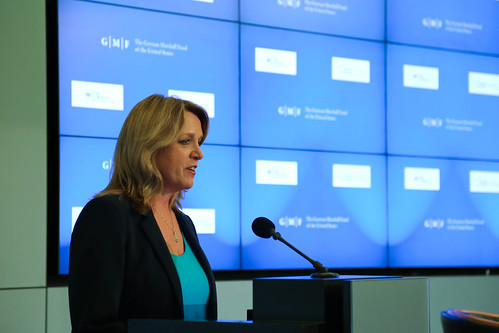 U.S. Secretary of the Air Force

Following a distinguished career as a scholar and policy analyst at the Woodrow Wilson International Center for Scholars and the RAND Corporation, Ian Lesser is the GMF’s Vice-President and the Executive Director of the Transatlantic Center, leading work on the Mediterranean, Turkey and the wider Atlantic. From 1994-1995, Lesser was a member of the Secretary’s Policy Planning Staff at the US Department of State, responsible for Turkey, Southern Europe, North Africa, and the multilateral track of the Middle East peace process. He is a member of the Council on Foreign Relations, the International Institute for Strategic Studies and the Pacific Council on International Policy.